In this chapter, we describe a toolkit of tricks for interactively rendering 2D and 3D data sets that are stored in difficult formats. These data formats are common in GPGPU computations and when volume rendering from compressed data. GPGPU examples include the "flat 3D textures" used for cloud and fire simulations and the sparse formats used for implicit surface deformations. These applications use complex data formats to optimize for efficient GPU computation rather than for efficient rendering. However, such nonstandard and difficult data formats do not easily fit into standard rendering pipelines, especially those that require texture filtering. This chapter introduces deferred filtering and other tips and tricks required to efficiently render high-quality images from these complex custom data formats.

The key concept for achieving filtered, interactive rendering from difficult data formats is deferred filtering. Deferred filtering is a two-pass rendering approach that first reconstructs a subset of the data into conventional 2D textures. A second pass uses the hardware's native interpolation to create high-quality, filtered renderings of 2D or 3D data. The algorithm is incremental, such that rendering 3D data sets requires approximately the same amount of memory as rendering 2D data.

The deferred filtering approach is relevant to GPGPU computations that simulate or compress 2D and 3D effects using a difficult or nonstandard memory layout, as well as volume renderers that use compressed data formats. Relevant GPGPU applications include sparse computations and flat 3D textures (see Chapter 33, "Implementing Efficient Parallel Data Structures on GPUs"). Traditionally, high-quality rendering of these data sets requires that interpolation be done "by hand" in a fragment program, which in turn requires the reconstruction of multiple neighboring data samples. This approach leads to an enormous amount of redundant work.

Deferred filtering was first described in Lefohn et al. 2004. The paper presents algorithms for interactively computing and rendering deformable implicit surfaces. The data are represented in a sparse tiled format, and deferred filtering is a key component of the interactive volume rendering pipeline described in the paper. In this chapter we expand and generalize their description of the technique.

Let's examine a simple scenario: imagine that you are rendering a volumetric effect such as a cloud or an explosion, and the 3D data have been compressed using vector quantization (see Schneider and Westermann 2003). This scheme compresses blocks of data by using a single value, called the key. The key value is used as an index into a code book, which allows blocks of data with similar characteristics to share the same memory. Reconstructing these data requires you first to read from the key texture, and then to read from the corresponding texel in the code book texture. Let's imagine that it takes four fragment program instructions to reconstruct a single texel.

One problem with this approach is that you cannot simply enable linear texture interpolation on the GPU and expect a smoothly filtered texture. Instead, linear interpolation must be implemented "by hand" as part of your fragment program. In practice, this is so expensive that renderers often resort to nearest-neighbor sampling only and forgo filtering completely. See Figure 41-1, top right. To perform "by-hand" filtering means we must reconstruct the 8 nearest texels and then perform 7 linear interpolations (LERPs) to get just a single trilinearly filtered value for each rendered fragment. Let's say that the original data size is 1283 voxels, the rendering fills a viewport of size 2562 (that is, the rendering magnifies the data by 2x), and we are sampling the data twice per voxel. The number of fragments rendered would be 256 x 256 x 128 x 2, which totals approximately 16 million fragments. Now let's look at the number of fragment program instructions per fragment: 8 x 4 (8 texels times 4 instructions for each reconstruction) + 8 (texture reads) + 14 (for trilinear interpolation; LERP and ADD), which equals 54 instructions per filtered texture read. This brings us to a grand total of one billion fragment instructions for this simple rendering. As you can imagine, this might put a damper on your application's interactivity.

To combat the explosion of fragment instructions required for texture filtering in the previous example, we advocate a two-pass rendering approach. This two-pass approach avoids redundant work (texture reads and math) and leverages the hardware's native filtering capabilities. The first pass reconstructs a local subset of the data at its native resolution, and the second pass renders the reconstructed data using the GPU's hardware filtering capabilities.

In the previous example, we described naive slice-based volume rendering (see Ikits et al. 2004) of 3D data stored in a custom, compressed memory format. Deferring the filtering to another pass has huge advantages, but it requires us to solve the problem slightly differently. Instead of rendering the volume by using arbitrary slice planes, we use axis-aligned slicing (utilizing 2D textures). This method renders the volume slices along the major volume axis that most closely aligns with the view direction. Just like Rezk et al. (2000), we generate trilinearly filtered samples between volume slices by reading from two adjacent 2D slices and computing the final LERP in a fragment program. 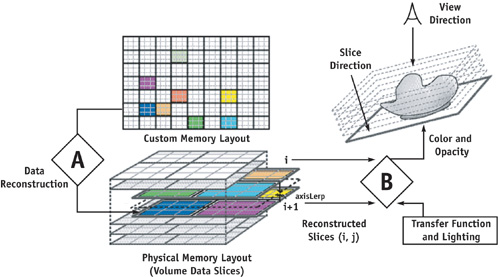 Now, instead of reconstructing and filtering the data for each fragment rendered, we reconstruct the data at its native resolution and let the GPU's texture engine do the bulk of the filtering. The savings are dramatic: 3 fragment instructions (2 texture reads and 1 LERP) compared to 54 fragment instructions for single-pass reconstruction and rendering. Naturally, there is some overhead for the additional pass, which must include the reconstruction cost (but only once per texel). Be sure to avoid unnecessary texture copies by using render-to-texture (such as pbuffers) for slice textures i and i + 1.

The function in Listing 41-1 shows the three instructions needed to read a trilinearly filtered 3D texture by using deferred filtering. Notice that the axisLerp variable is a constant. Because we are using axis-aligned slicing, we know that every fragment rendered for the current slice will have the exact same texture coordinate along the slice axis; that is, the axisLerp represents the slice's position within the current voxel and is constant across the entire slice (see Figure 41-2). 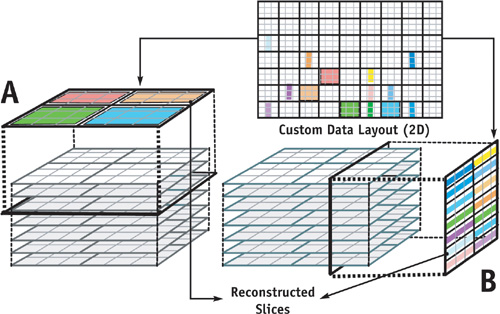 Although there is some overhead for the separate reconstruction and filtering passes, in general we observed speedups from 2x to 10x in practice. In Figure 41-4, we show the timings for an implementation using deferred filtering to render from a compressed volume format. We can see that in some cases, deferred filtering is even faster than nearest-neighbor filtering. This is because when sampling more than once per voxel, nearest-neighbor filtering will perform redundant reconstruction. 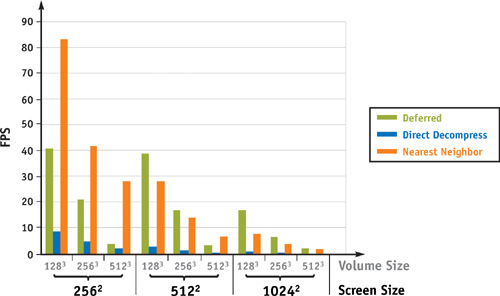 The major problem with reconstructing and filtering custom data formats without deferred filtering is that, for a given rendered fragment, there are often many neighboring fragments that reconstruct identical values. The burden of this obvious inefficiency increases greatly as the cost of reconstruction goes up.

For the foreseeable future, the hard-wired efficiency of the GPU texturing and filtering engine will greatly exceed that of "hand-coded" fragment program trilinear filtering. Lifting computation from the fragment program to the appropriate built-in functional units will nearly always be a performance win. In the examples and algorithm, we assume the use of trilinear interpolation. However, even when we implement a higher-order filtering scheme, deferred filtering is still a big win (see Hadwiger et al. 2001). As the filter support grows (that is, as the number of data samples required for filtering increases), so does the redundancy (and therefore cost) of reconstruction. Deferred filtering guarantees that the cost of reconstruction is incurred only once per texel.

Depending on your memory layout, other, more subtle issues come into play. Multidimensional cache coherence is an important mechanism that GPUs utilize to achieve their stellar performance. Reading multiple texels from disparate memory locations can cause significant cache-miss latency, thus increasing render times. Deferred filtering may not be able to entirely prevent this effect, but it ensures that such problems happen only once per texel rather than eight times per fragment.

41.5 Conclusions: When to Defer

The need to represent volume data in difficult formats arises in two scenarios. The first case is when the data are stored on the GPU in a compressed format, as in our example earlier. The second case arises when the 3D data are generated by the GPU (that is, dynamic volumes). Dynamic volumes arise when performing GPGPU techniques for simulation, image processing, or segmentation/morphing. Current GPU memory models require us to store dynamic volume data either in a collection of 2D textures or as a "flat 3D texture" (see Chapter 33 of this book, "Implementing Efficient Parallel Data Structures on GPUs," for more details). Rendering the collection of 2D textures requires a new variant of 2D-texture-based volume rendering that uses only a single set of 2D slices described earlier. Deferred filtering frees you from worrying about whether or not your GPGPU computational data structure is suitable for interactive rendering. Deferred filtering makes it possible to interactively render images from any of these data formats.

Deferred filtering is efficient in both time and space because it nearly eliminates reconstruction costs (because they are incurred only once per texel) and is incremental (requiring only two slices at a time). Even if the reconstruction cost is negligible, it is still more efficient to add the deferred reconstruction pass than to filter the data in a fragment program for each fragment.

One disadvantage of deferred filtering is the fact that it requires us to "split" our fragment programs. In general, this isn't a problem, because texture reads often occur up front before other computation. When the texture read is dependent on other computation, however, using deferred filtering may require sophisticated multipass partitioning schemes (Chan et al. 2002, Foley et al. 2004, Riffel et al. 2004).

Rezk-Salama, C., K. Engel, M. Bauer, G. Greiner, and T. Ertl. 2000. "Interactive Volume Rendering on Standard PC Graphics Hardware Using Multi-Textures and Multi-Stage Rasterization." In Proceedings of the SIGGRAPH/Eurographics Workshop on Graphics Hardware 2000, pp. 109–118. These authors were among the first to leverage the capabilities of programmable graphics hardware for volume rendering. They were also the first to demonstrate trilinear interpolation of 3D textures stored as 2D slices.