Noise is an important building block for adding natural-looking variety to procedural textures. In the real world, nothing is perfectly uniform, and noise provides a controlled way of adding this randomness to your shaders.

Perlin's improved noise algorithm meets all these requirements (Perlin 2002). We now go on to explain how it can be implemented on the GPU. 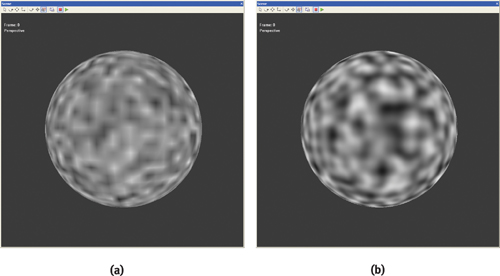 The obvious disadvantage of this approach is that it is more computationally expensive. This is largely because we have to perform the interpolation in the shader, and are not taking advantage of the texture-filtering hardware present in the GPU. The optimized implementation of 3D noise compiles to around 50 Pixel Shader 2.0 instructions using the latest compilers; fortunately, this doesn't pose a challenge for current high-end GPUs.

The first stage generates a repeatable pseudorandom value for every integer (x, y, z) position in 3D space. This can be achieved in several ways, but Perlin's algorithm uses a hash function. The hash function is based on a permutation table that contains the integers from 0 to 255 in random order. (This table can be standardized between implementations so that they produce the same results.) First the table is indexed based on the x coordinate of the position. Then the y coordinate is added to the value at this position in the table, and the result is used to look up in the table again. After this process is repeated for the z coordinate, the result is a pseudorandom integer for every possible (x, y, z) position.

In the second stage of the algorithm, this pseudorandom integer is used to index into a table of 3D gradient vectors. In the "improved" algorithm, only eight different gradients are used. A scalar value is calculated by taking the dot product between the gradient and the fractional position within the noise space. The final value is obtained by interpolating between the noise values for each of the neighboring eight points in space.

The CPU implementation of Perlin's improved noise algorithm stores the permutation and gradient tables in arrays. Pixel shaders do not currently support indexing into constant memory, so instead we store these tables in textures and use texture lookups to access them. The texture addressing is set to wrap (or repeat) mode, so we don't have to worry about extending the tables to avoid indexing past the end of the array, as is done in the CPU implementation. Listing 26-1 shows how these textures can be initialized in an FX file.

One of the most useful features of the Microsoft Direct 3D Effects and CgFX runtimes is a virtual machine that can be used to procedurally generate textures from functions. We use this feature to build the permutation and gradient textures from the same data given in the reference implementation. If you are using another shading language, such as the OpenGL Shading Language, it should be trivial to include this code in your application instead.

Example 26-1. Source Code for Initializing the Permutation Texture for Noise

The final code that uses these two textures to compute noise values is given in Listing 26-3. It includes Perlin's new interpolation function, which is a Hermite polynomial of degree five and results in a C2 continuous noise function. Alternatively, you can also use the original interpolation function, which is less expensive to evaluate but results in discontinuous second derivatives.

This same code could be also be compiled for the vertex shader with some modifications. Vertex shaders support variable indexing into constant memory, so it is not necessary to use texture lookups.

For brevity, the code in Listing 26-3 provides the implementation for only 3D noise. The version of the code on this book's CD includes the 4D version.

The code in Listing 26-3 is a straightforward port of the reference CPU implementation. There are several ways this code can be optimized to take better advantage of the graphics hardware. (The optimized code is included on the accompanying CD, along with the implementation for 4D noise.)

The reference implementation uses six recursive lookups into the permutation table to generate the initial four hash values. The obvious way to implement this on the GPU is as six texture lookups into a 1D texture, but instead we can precalculate a 256x256-pixel RGBA 2D texture that contains four values in each texel, and use a single 2D lookup.

Because much of the code is scalar, there may also be potential for taking more advantage of vector operations.

We have described an implementation of procedural noise for pixel shaders. Procedural noise is an important building block for visually rich rendering, and it can be used for bump mapping and other effects, as shown in Figure 26-2. Although developers of most real-time applications running on today's GPUs will not want to dedicate 50 pixel shader instructions to a single noise lookup, this technique is useful for high-quality, offline-rendering applications, where matching existing CPU noise implementations is important. As the computational capabilities of GPUs increase and memory access becomes relatively more expensive due to continued hardware trends, procedural techniques such as this will become increasingly attractive. 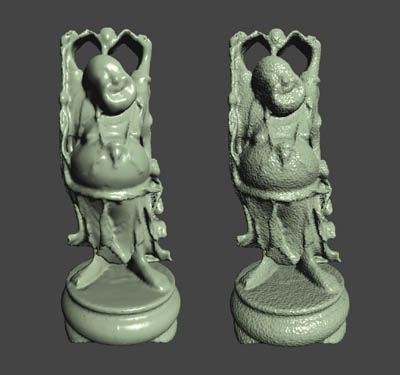