Three-dimensional modeling and animation packages offer a wide variety of deformation tools such as Deform by Lattice and Deform by Wave. These tools allow a small number of controls to warp an arbitrarily complex mesh. Deformers can be used to quickly perform advanced modeling operations, and their controls can be animated to provide powerful animation rigs. In most cases, offloading deformation calculations from the CPU onto the GPU is possible, allowing more advanced animation systems within real-time applications and providing more interactive modeling tools. In this chapter, we will explore how to offload deformers onto the GPU, with emphasis on the problem of computing normals.

A deformer is an operation that takes as input a collection of vertices and generates new coordinates for those vertices (the deformed coordinates). In addition, new normals and tangents can also be generated. If you want to deform a sphere, you pass the coordinates of all its vertices to the deformer and you get back a new set of coordinates. This task is perfectly suited for vertex programs, provided that the following requirements hold:

A very simple example would be a translation. A translation deformer takes an input coordinate and returns a translated coordinate. Examples of deformers found in Softimage|XSI, Maya, and 3ds max are Deform by Curve, Cage, Lattice, Bend, Bulge, Shear, Twist, and more. The Randomize deform in Softimage|XSI is not a deformer that meets our requirements because it is not deterministic. Our technique for normal computation could not be used to implement a randomize mesh deform.

Most deformers have controls: user-defined parameters that give the deformer some variation. In most cases, controls can be animated. A wave deformer has amplitude and phase controls. A lattice deformer has lattice control points.

In the most general sense, we think of a deformer as a vector-valued function, f(x, y, z). Or if you like, a deformer is three scalar functions put into a vector:

The deform operation also depends on the controls of the deformer. Controls are parameters that affect the operation of the deformer. For example, the output of a wave deformer depends on the frequency of the wave, so technically the function f depends on a variable, say freq, as well. However, we will not write f(x, y, z, freq). Instead, we will think of freq as being a constant for a given deformation operation: it does not vary across the vertices of the mesh being deformed. Therefore, it will simply appear as a constant in at least one of the component functions of f. Likewise, for a time parameter that may be used to animate a deformer: the time parameter, t, will appear as a constant in f, because time doesn't depend on coordinates x, y, and z.

To facilitate normal computation, it will be useful to formulate the deformer in correspondence with our mathematical definition: in functional form. If we think of a simple translation of positive 2 units in the y axis as a deformer, then the deformer f is:

If we are implementing a radial wave deformer, we might have

where is the phase control parameter.

Note: fx denotes the x component function of f, not to be confused with

Once we have written down the deformer in functional form, deforming the vertices in a vertex program is very straightforward. Control parameters and possibly a time parameter are passed in as uniform inputs to the program (in the constant registers). To compute the vertex positions, we simply compute f(x, y, z) and store the result in the vertex position output. We apply the model and view transformations before or after computing f, depending on whether we want to deform in object, world, or view space. We may also have additional coordinate transformations to center and orient a spatially dependent deformer with respect to the object it is deforming.

How Would We Compute Normals in Software?

Animation packages first transform all vertices in the mesh by the deformer. Once that is done, it is possible to traverse the vertices in a second pass to recompute normals based on neighboring vertices in the new, deformed mesh. We don't have that option with vertex programs. Each vertex being processed in a vertex program has no knowledge of its neighbors, and there is no second stage where we can look around and do computations.

If a deformer f(x, y, z) = (fx , fy , fz ) has continuous first-order partial derivatives, then we can compute a matrix for each vertex called the Jacobian matrix, J. As we know, everywhere a scalar function f(x) is smooth, it is locally approximated by a straight line (a linear function: f(x) 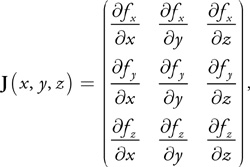 where all partial derivatives are evaluated at (x, y, z).

Example. Suppose we had the following deformer (where is a constant control parameter):

Then the Jacobian would be:

For each position (x, y, z), we now have a linear transformation matrix J(x, y, z) that we can use to transform vectors at that position. If we had a tangent vector t at (x, y, z), then the deformed tangent would be J(x, y, z) * t (followed by a renormalize to get a unit tangent).

If we make the assumption that the vertices of the mesh are discrete samples of a smooth surface, then transforming vectors on the surface by the Jacobian matrix is valid. We can also transform normals using J(x, y, z) in two equivalent ways.

Inverting 3x3 matrices is not a particularly suitable task for a vertex program, so method (2) is generally easier to implement and faster to compute. If a tangent and binormal are not given per vertex, they can be generated either on the CPU when the mesh is loaded or in the vertex program. To generate a tangent, compute two cross products, n x (0, 0, 1) and n x (0, 1, 0). Select the result with the larger magnitude. The result is a tangent vector to n. The binormal is then given by v = n x u.

It is important to renormalize the normals, because in general normals generated with these methods will not be unit length, and most lighting equations assume unit normals.

As mentioned before, an alternative approximate numerical method for computing normals involves deforming three vertices for every input vertex, one very slightly along the tangent and one very slightly along the binormal. These three deformed vertices can then be used to approximate the deformed tangent and binormal, and a cross product gives the estimated deformed normal. This involves more than three times the work of deforming just the one set of vertex coordinates. In a lot of cases, computation of the Jacobian matrix can be done in fewer instructions than are required to deform two extra sets of coordinates. Expressions tend to be repeated across terms in the Jacobian, and some expressions are exactly those that were computed in computing the vertex coordinates and can be reused. This is not always the case, especially if the partial derivatives involve complicated expressions. The Jacobian method has no overhead of passing down extra coordinates and avoids most of the numerical difficulties associated with the approximate method.

Performance is a simple function of the number of instructions needed to compute the deformation. Complex deformers such as a 4x4x4 lattice deform require a lot of instructions, which will limit the amount of geometry that can be deformed in real time. In each case, the complexity of the deformer, the CPU load and GPU load of the application, and the amount of geometry to be deformed will all have to be factored in to determine if deforming on the GPU is the better solution.

Here we will consider a simple circular wave with vertical displacement (in the y axis) based on radial distance from the origin in the x-z plane. In functional form we have:

where u is a wave frequency control parameter and is the wave phase parameter. We then compute the Jacobian matrix: 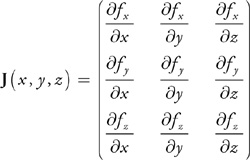 Next, suppose a tangent and binormal are given:

Then the transformed tangent and binormal are:

Then the deformed normal will be in the direction of:

Then we normalize the last calculation to get our deformed normal:

We have considered a large class of mesh deformation operations and found the mathematical tools to perform such operations on the graphics hardware. The Jacobian matrix of the deformation allows us to deform normals inside the vertex program without worrying about neighboring deformed vertices. This technique is widely applicable to a number of deformation operations, keeping in mind the limitations that were observed.

Although much of this book deals with shading effects, the way that objects move and deform is just as important in creating realistic animated graphics. Currently, the quality of character animation in movies surpasses the animation in interactive graphics such as video games. This quality gap results in part from the much more sophisticated deformation techniques used in movies; most games are limited to simple skinning. We hope that over time, techniques such as those described in this chapter will help to bring the full spectrum of animation techniques to real-time productions.