Over the past few years, the hardware-accelerated rendering pipeline has rapidly increased in complexity, bringing with it increasingly intricate and potentially confusing performance characteristics. Improving performance used to mean simply reducing the CPU cycles of the inner loops in your renderer; now it has become a cycle of determining bottlenecks and systematically attacking them. This loop of identification and optimization is fundamental to tuning a heterogeneous multiprocessor system; the driving idea is that a pipeline, by definition, is only as fast as its slowest stage. Thus, while premature and unfocused optimization in a single-processor system can lead to only minimal performance gains, in a multiprocessor system such optimization very often leads to zero gains.

Working hard on graphics optimization and seeing zero performance improvement is no fun. The goal of this chapter is to keep you from doing exactly that.

The pipeline, at the very highest level, can be broken into two parts: the CPU and the GPU. Although CPU optimization is a critical part of optimizing your application, it will not be the focus of this chapter, because much of this optimization has little to do with the graphics pipeline.

Figure 28-1 shows that within the GPU, there are a number of functional units operating in parallel, which essentially act as separate special-purpose processors, and a number of spots where a bottleneck can occur. These include vertex and index fetching, vertex shading (transform and lighting, or T&L), fragment shading, and raster operations (ROP). 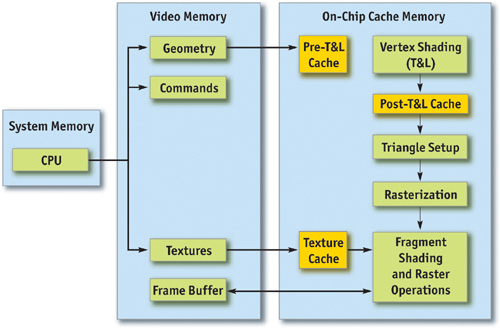 Locating the bottleneck is half the battle in optimization, because it enables you to make intelligent decisions about focusing your actual optimization efforts. Figure 28-2 shows a flow chart depicting the series of steps required to locate the precise bottleneck in your application. Note that we start at the back end of the pipeline, with the frame-buffer operations (also called raster operations) and end at the CPU. Note also that while any single primitive (usually a triangle), by definition, has a single bottleneck, over the course of a frame the bottleneck most likely changes. Thus, modifying the workload on more than one stage in the pipeline often influences performance. For example, a low-polygon skybox is often bound by fragment shading or frame-buffer access; a skinned mesh that maps to only a few pixels on screen is often bound by CPU or vertex processing. For this reason, it frequently helps to vary workloads on an object-by-object, or material-by-material, basis. 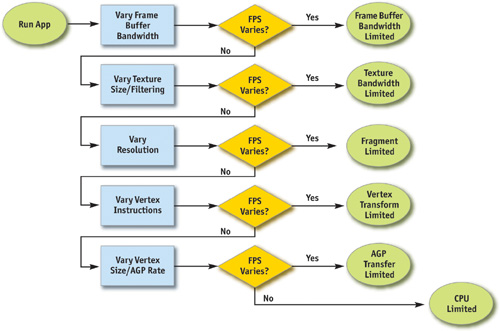 For each pipeline stage, we also mention the GPU clock to which it's tied (that is, core or memory). This information is useful in conjunction with tools such as PowerStrip (EnTech Taiwan 2003), which allows you to reduce the relevant clock speed and observe performance changes in your application.

Frame-buffer bandwidth is a function of GPU memory clock, so modifying memory clocks is another technique for helping to identify this bottleneck.

Texture bandwidth is consumed any time a texture fetch request goes out to memory. Although modern GPUs have texture caches designed to minimize extraneous memory requests, they obviously still occur and consume a fair amount of memory bandwidth.

Modifying texture formats can be trickier than modifying frame-buffer formats as we did when inspecting the ROP; instead, we recommend changing the effective texture size by using a large amount of positive mipmap level-of-detail (LOD) bias. This makes texture fetches access very coarse levels of the mipmap pyramid, which effectively reduces the texture size. If this modification causes performance to improve significantly, you are bound by texture bandwidth.

Texture bandwidth is also a function of GPU memory clock.

Fragment shading refers to the actual cost of generating a fragment, with associated color and depth values. This is the cost of running the "pixel shader" or "fragment shader." Note that fragment shading and frame-buffer bandwidth are often lumped together under the heading fill rate, because both are a function of screen resolution. However, they are two distinct stages in the pipeline, and being able to tell the difference between the two is critical to effective optimization.

Before the advent of highly programmable fragment-processing GPUs, it was rare to be bound by fragment shading. It was often frame-buffer bandwidth that caused the inevitable correlation between screen resolution and performance. This pendulum is now starting to swing toward fragment shading, however, as the newfound flexibility enables developers to spend oodles of cycles making fancy pixels.

The first step in determining if fragment shading is the bottleneck is simply to change the resolution. Because we've already ruled out frame-buffer bandwidth by trying different frame-buffer bit depths, if adjusting resolution causes performance to change, the culprit is most likely fragment shading. A supplementary approach would be to modify the length of your fragment programs and see if this influences performance. But be careful not to add instructions that can easily be optimized away by a clever device driver.

Fragment-shading speed is a function of the GPU core clock.

The vertex transformation stage of the rendering pipeline is responsible for taking an input set of vertex attributes (such as model-space positions, vertex normals, texture coordinates, and so on) and producing a set of attributes suitable for clipping and rasterization (such as homogeneous clip-space position, vertex lighting results, texture coordinates, and more). Naturally, performance in this stage is a function of the work done per vertex, along with the number of vertices being processed.

With programmable transformations, determining if vertex processing is your bottleneck is a simple matter of changing the length of your vertex program. If performance changes, you are vertex-processing bound. If you're adding instructions, be careful to add ones that actually do meaningful work; otherwise, the instructions may be optimized away by the compiler or the driver. For example, no-ops that refer to constant registers (such as adding a constant register that has a value of zero) often cannot be optimized away because the driver usually doesn't know the value of a constant at program-compile time.

If you're using fixed-function transformations, it's a little trickier. Try modifying the load by changing vertex work such as specular lighting or texture-coordinate generation state.

Vertex processing speed is a function of the GPU core clock.

Vertices and indices are fetched by the GPU as the first step in the GPU part of the pipeline. The performance of vertex and index fetching can vary depending on where the actual vertices and indices are placed. They are usually either in system memory—which means they will be transferred to the GPU over a bus such as AGP or PCI Express—or in local frame-buffer memory. Often, on PC platforms especially, this decision is left up to the device driver instead of the application, although modern graphics APIs allow applications to provide usage hints to help the driver choose the correct memory type.

Determining if vertex or index fetching is a bottleneck in your application entails modifying the vertex format size.

If none of these tests influences your performance significantly, you are primarily CPU bound. You may verify this fact by underclocking your CPU: if performance varies proportionally, you are CPU bound.

Now that we have identified the bottleneck, we must optimize that particular stage to improve application performance. The following tips are categorized by offending stage.

Many applications are CPU bound—sometimes for good reason, such as complex physics or AI, and sometimes because of poor batching or resource management. If you've found that your application is CPU bound, try the following suggestions to reduce CPU work in the rendering pipeline.

Anytime you perform a synchronous operation that demands access to a GPU resource, there is the potential to massively stall the GPU pipeline, which costs both CPU and GPU cycles. CPU cycles are wasted because the CPU must sit and spin in a loop, waiting for the (very deep) GPU pipeline to idle and return the requested resource. GPU cycles are then wasted as the pipeline sits idle and has to refill.

This locking can occur anytime you

In general, you should avoid accessing a resource the GPU is using during rendering.

We can also call this tip "Minimize the Number of Batches." A batch is a group of primitives rendered with a single API rendering call (for example, DrawIndexedPrimitive in DirectX 9). The size of a batch is the number of primitives it contains. As a wise man once said, "Batch, Batch, Batch!" (Wloka 2003). Every API function call to draw geometry has an associated CPU cost, so maximizing the number of triangles submitted with every draw call will minimize the CPU work done for a given number of triangles rendered.

Some tips to maximize the size of your batches:

28.3.2 Reducing the Cost of Vertex Transfer

Vertex processing is rarely the bottleneck on modern GPUs, but it may occur, depending on your usage patterns and target hardware.

Try these suggestions if you're finding that vertex processing is the bottleneck in your application:

If you're using long and complex fragment shaders, it is often likely that you're fragment-shading bound. If so, try these suggestions:

If you've found that you're memory-bandwidth bound, but mostly when fetching from textures, consider these optimizations:

As power and programmability increase in modern GPUs, so does the complexity of extracting every bit of performance out of the machine. Whether your goal is to improve the performance of a slow application or to look for areas where you can improve image quality "for free," a deep understanding of the inner workings of the graphics pipeline is required. As the GPU pipeline continues to evolve, the fundamental ideas of optimization will still apply: first identify the bottleneck, by varying the load or the computational power of each unit; then systematically attack those bottlenecks, using your understanding of how each pipeline unit behaves.

NVIDIA. 2003. Developer Web site. http://developer.nvidia.com. On this site, you can find tools that will help you with performance tuning.

Wloka, Matthias. 2003. "Batch, Batch, Batch: What Does It Really Mean?" Presentation at Game Developers Conference 2003. Available online at http://developer.nvidia.com/docs/IO/8230/BatchBatchBatch.pdf Specific information can be found at the following Web addresses.