Shadow mapping is the method of choice for creating shadows in high-end rendering for motion pictures and television. However, it has been problematic to use shadow mapping in real-time applications, such as video games, because of aliasing problems in the form of magnified jaggies. This chapter shows how to significantly reduce shadow map aliasing in a shader. It describes how to implement a simplified version of percentage-closer filtering that makes the most out of the GPU's shadow-mapping hardware to render soft-edged, antialiased shadows at real-time rates.

Unlike normal textures, shadow map textures cannot be prefiltered to remove aliasing. Instead, multiple shadow map comparisons are made per pixel and averaged together. This technique is called percentage-closer filtering (PCF) because it calculates the percentage of the surface that is closer to the light and, therefore, not in shadow.

The original PCF algorithm, described in Reeves et al. 1987, called for mapping the region to be shaded into shadow map space and sampling that region stochastically (that is, randomly). The algorithm was first implemented using the REYES rendering engine, so the region to be shaded meant a four-sided micropolygon. Figure 11-1 shows an example of that implementation. 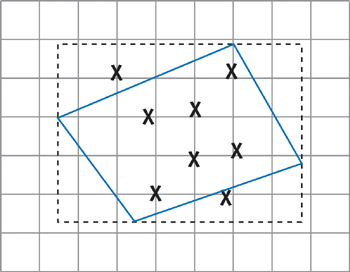 In our implementation, we have changed the PCF algorithm slightly to make it easy and efficient to apply. Instead of calculating the region to be shaded in shadow map space, we simply use a 4x4-texel sample region everywhere. This region is large enough to significantly reduce aliasing, but not so large as to require huge numbers of samples or stochastic sampling techniques to achieve good results. Note that the sampling region is not aligned to texel boundaries. An aligned region would not achieve the antialiasing effect that we want.

Hardware shaders work on pixels, not on micropolygons, so matching the original implementation would involve transforming a four-sided polygon representing a screen pixel into shadow map space to calculate the sample region. Our implementation uses a fixed-size sample region instead. A fixed-size region lets us skip a complicated transformation and allows us to calculate a precise shadow percentage instead of an approximate one using stochastic sampling. See Figure 11-2. 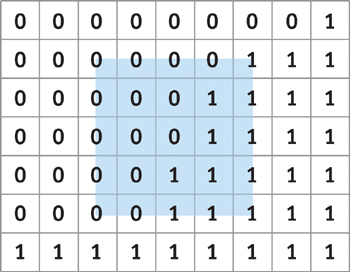 NVIDIA GPUs have built-in percentage-closer filtering for shadow map sampling. The hardware does four depth compares and uses the fractional part of the texture coordinate to bilinearly interpolate the shadow value. The shadow result is the percentage that a texel-size sample area is in shadow. See Figure 11-3. A single texel-size sample region is not big enough to effectively remove aliasing, but the region can be increased to a 4x4 texel size by averaging 16 shadow compare values. The offsets for x and y are -1.5, -0.5, 0.5, and 1.5 for samples one texel unit apart. 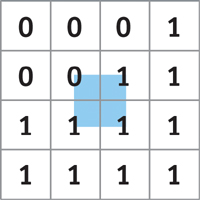 The following function can be used to do a projected texture map read with an offset given in texel units. The variable texmapscale is a float2 containing 1/width and 1/height of the shadow map.

We can implement the 16-sample version in a fragment program as follows:

The performance of the brute-force method is better than one might expect. Many of the texture fetches are in the texture cache because they are guaranteed to be close to one another. However, if we change the sampling pattern per pixel, we can attain similar results with only four samples per pixel.

The four-sample technique produces results similar to those created by dithering black-and-white data to render a grayscale image. The sample region size remains the same, but we use only four of the 16 samples per pixel. The set of four samples varies depending on the screen location. Figure 11-4 shows the sampling pattern used in the four-sample version of the shader to pick four out of 16 possible sample locations per pixel. 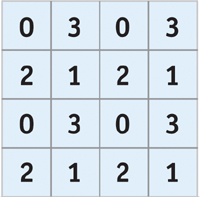 We can implement the four-sample version as follows:

How can we antialias shadows with a fixed-size sample region even though texture projection can greatly magnify the shadow map? The answer is simple: When a texture is magnified, the texture map samples are close to each other for adjacent pixels. If the samples are close to each other and the sampled area is relatively large, then there can be only a very small difference between the shadow values, because the sample areas overlap a lot. Figure 11-5 shows how sample areas for adjacent pixels overlap when the shadow map is magnified. 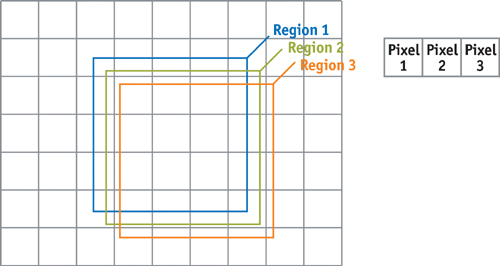 The more the shadow map is magnified, the smaller the difference between adjacent pixels, and the smoother the transition between shadowed and unshadowed regions. The hardware calculates that shadow percentage with eight bits of precision, so even in the case of extreme magnification and high-contrast shadows, there will always be a smooth shadow transition without banding. If the shadow regions are very close to each other, the shadow value will differ only by the least significant bit for eight-bits-per-component output. This is illustrated in Figures 11-6, 11-7, and 11-8, which show shadows for a ninja model with 1, 4, and 16 samples, respectively. Figure 11-9 shows a magnification of the ninja's thumb shadow in each of the three cases. Notice the vastly improved shadow quality in the 16-sample case. 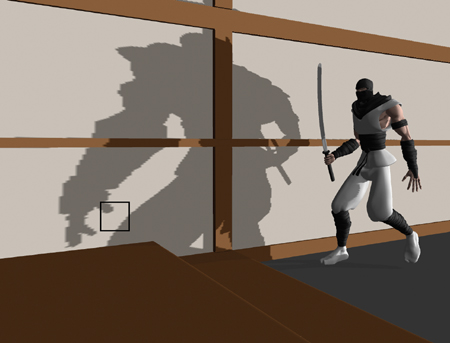 Figure 11-6 Ninja Shadow with One Sample per Pixel 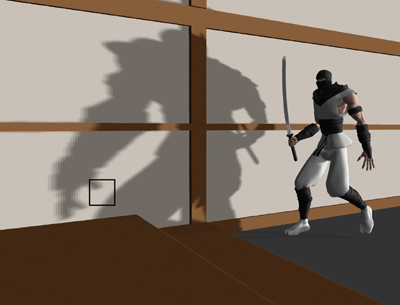 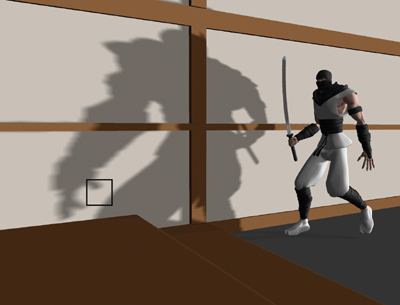 Shadow mapping is a popular method for rendering shadows, but it suffers from aliasing artifacts. We can greatly reduce shadow map aliasing by averaging multiple shadow map values. If we take advantage of the GPU's shadow-mapping hardware and use clever sampling techniques, we can render soft-edged, antialiased shadows at high frame rates.

Fernando, Randima, and Mark Kilgard. 2003. The Cg Tutorial. Addison-Wesley. This introduction to the Cg language has a good section on shadow mapping.