A stereogram is a 2D image that encodes stereo information so that, when viewed correctly, it reveals a hidden 3D scene. It all started back in the 1960s, when Bela Julesz, who worked at (AT&T) Bell Labs researching human vision—particularly depth perception and pattern recognition—created the random-dot stereogram (RDS). Stereograms evolved from stereo photography, in which two photographs are taken from slightly different camera positions (representing the displacement between our eyes).

Stereo photography is very old, dating back to 1838, but some of the old stereo cameras and stereo photograph viewers, such as the one shown in Figure 41-1a, can still be found at antique shops. The idea behind stereo photography is to take two similar photographs, but from different positions displaced horizontally (like our eyes). Our eyes are separated from each other by about 65 mm, and this disparity causes slightly different images to be presented to the brain. These differences allow the perception of depth.

To generate an RDS, we start by creating an image made of random dots, as shown in Figure 41-2a. Then we duplicate the image and modify it by selecting a region and displacing it horizontally, as in Figure 41-2b (the bigger the displacement, the deeper it looks). The gaps created by moving the regions of the image are then filled with more random-generated dots, as in Figure 41-2c, and...that's it!

We now have two images, the original and the copied/displaced versions. Displaying each image to each eye allows the depth perception, and the hidden 3D scene is then visible.

Changing the focus point moves the duplicated images in relation to each other, and when the center images merge, you'll see the 3D hidden scene. At the correct focus point, you'll see only three images: one in 3D at the center and two in 2D on the edges. See Figure 41-4 for a detailed explanation of how this works. 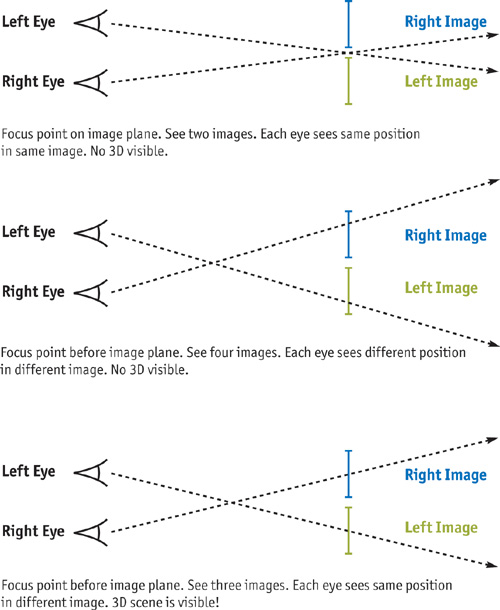 A single-image stereogram (SIS), an evolution of the standard RDS, requires only one image. The idea is that neighboring vertical slices of the image will match patterns, thus generating the depth perception. See Figure 41-5 (top). In an SIS, we slice the image into vertical strips, reducing the displacement needed when viewing. For example, if we slice the image into eight strips, we need one-eighth the displacement to view it. This allows the eye crossing point to be closer to the image plane, which is more comfortable to the viewer.

For an RDS, the eye crossing point must be farther in front of the image plane (that is, closer to the viewer) than in an SIS, so that the displacement of the images seen is the size of the image itself. Actually, an RDS pair works just like an SIS with two strips.

With stereo photography and classic RDS images, viewers must always cross their eyes in front of the image plane. But in an SIS, because the separation between the strips is smaller than the distance between our eyes, there is an alternative, more comfortable way to view the image. Viewers can cross their eyes behind the image plane, thereby inverting their depth perception but still resulting in a 3D image. See Figure 41-5 (bottom). Most popular SIS images are generated to be viewed this way.

An SIS is generated from a given depth map (that is, a grayscale image with depth information) and a tile pattern (usually a colored tile image), as in Figure 41-6. 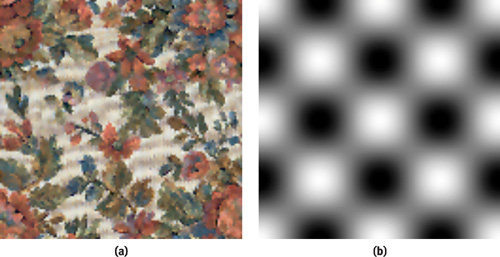 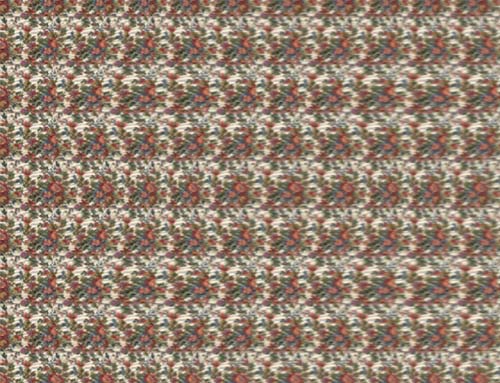 When creating a new SIS, we need to consider parameters: the number of strips to use; the depth factor, which can increase or decrease the depth perception (which in turn controls the amount of deformation applied to the pattern tiles); and whether to invert the depth values (white can be considered depth 0 or full-depth 1).

Here are some of the parameters: 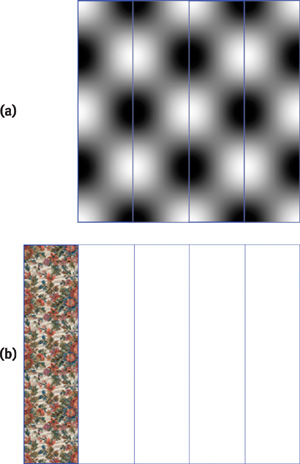 This is the pseudocode for the SIS rendering:

At the beginning of the pseudocode, we simply draw the first strip, texture-mapped with the tile pattern, as in Figure 41-8a (no fragment program is needed, just normal texture mapping). We copy the strip pixels to the result texture map (using glCopyTexSubImage2D to copy the region we just modified). We then have the result image, as shown in Figure 41-8b.

Next, we enable the fragment program and set the depth map, result map, and depth factor as parameters to it. We loop, drawing the remaining four strips from the result image. For each strip we draw, we must copy its pixels to the result texture map, because each new strip uses the previous strip's image as a reference. 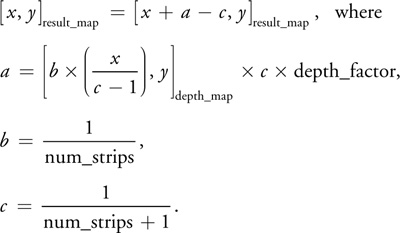 Because SIS images can be generated in real time using the fragment program capabilities of our GPU, we can now make an animated single-image stereogram (ASIS). We will use a normal 3D scene made of triangles, and use its z-buffer as the SIS depth map—which means we'll render a 3D scene from a given viewpoint and read the z-buffer contents into the depth map texture. See Figure 41-9.

When we use the z-buffer from a real-time rendered scene as the source for the depth map image, we can interactively move the 3D scene (or have a predefined camera animation path) and have the stereogram update every frame to reflect the changes. This produces a real-time animated stereogram (a single frame from the animation is shown in Figure 41-10). 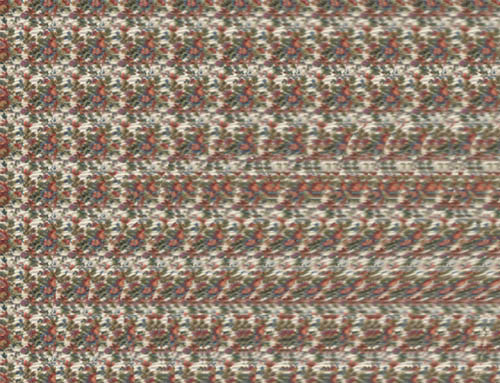 Figure 41-10 One Frame of the Animated Stereogram

It's difficult to visualize an animated stereogram, so look at it first without animation, and when you have a clear view of it, turn animation on. This is because you must keep your eye crossing point fixed at the correct distance while the image animates to be able to visualize the animated stereogram. People unfamiliar with stereograms will find it easier to search for the correct eye crossing point distance with a static image. 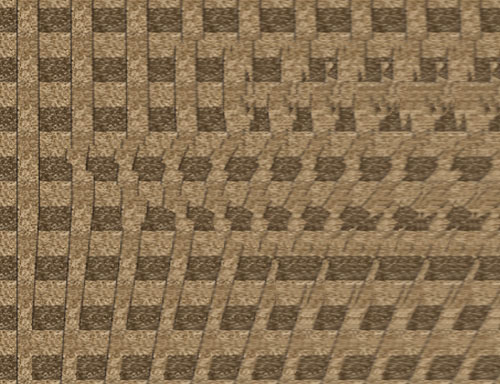 In the View menu, you can select options such as these: