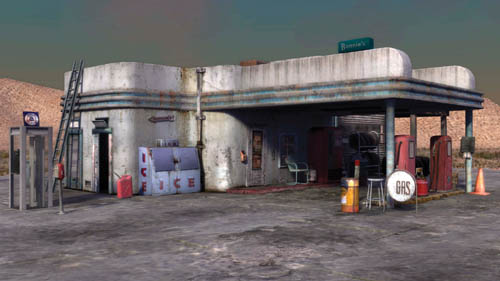 One of the goals of the GeForce FX 5900 demo "Last Chance Gas" was to create a scene with accurate outdoor lighting. One important aspect of outdoor lighting we wanted to capture is soft shadows from the Sun. Unlike the hard shadows produced by shadow maps or stencil shadow volumes, soft shadows have a penumbra region, which gives a smooth transition between shadowed and unshadowed regions. A correct penumbra makes for more realistic shadowing and gives the user a better sense of spatial relationships, making for a more realistic and immersive experience.

When we started writing the demo, we could not find any appropriate real-time soft shadow algorithm, even though a lot of research had been dedicated to the problem. Because the soft shadow problem is such a difficult one, we considered how we could simplify the problem to make it more feasible for real time.

Given that the gas station scene is static, we considered using a precomputed visibility technique such as spherical harmonic lighting (Sloan et al. 2002). Unfortunately for our purposes, spherical harmonic lighting assumes very low frequency lighting, and so it is not suitable for small area lights such as the Sun. We developed occlusion interval maps as a new precomputed visibility technique that would allow for real-time soft shadows from the Sun. Our method achieves this goal by reducing the problem to the case of a linear light source on a fixed trajectory.

Occlusion interval maps are not meant to be a general solution to the soft shadow problem, but we found them useful for shadowing in a static outdoor environment. As with other precomputed visibility techniques, occlusion interval maps rely on an offline process to store all visibility information, and so they won't work for moving objects or arbitrary light sources.

Suppose we have a light source such as the Sun that follows a fixed trajectory, and suppose that we want to precompute hard shadows for this light source. We can express the shadowing as a visibility function, which has a value of 0 when a point is in shadow and a value of 1 when it is illuminated. During rendering, this visibility function is computed, and the result is multiplied by a shading calculation to give the final color value.

The visibility function is a function of three variables: two spatial dimensions for the surface of the object and one dimension for time. Although we could store this function as a 3D texture, the memory requirements would be huge. Instead, because all the values of the visibility function are either 0 or 1, we can store the function using a method similar to run-length encoding. For each point, we find rising and falling edges in the time domain. These correspond to the times of day when the Sun appears and disappears, respectively. We define the "rise" vector as the vector of all rising edges, and the corresponding "fall" vector as the vector of all falling edges. See Figure 13-2. 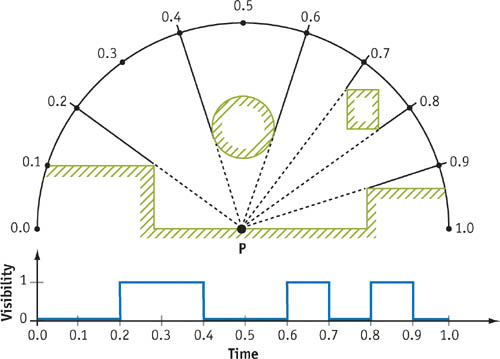 We now have all we need for precomputed visibility of hard shadows; given a rise vector, a fall vector, and time of day, we can compute the visibility function to determine if the point is in shadow.

. Over this time, the light source will sweep out a curve in space. If we take the average lighting over the time interval

, we will have computed the correct shadowing from the linear light source. This means that we can apply the same information used to render a hard shadow image to rendering a soft shadowed image. See Figure 13-3.

In order to generate occlusion interval maps, we have to compute the visibility function from every point on the light source trajectory to every pixel in the occlusion interval map. We do this by taking a sequence of evenly spaced points along the curve, tracing a ray from each occlusion interval map pixel to each of these points, and detecting the rising and falling edges of each visibility function. We store rising and falling edge values in eight bits; so 256 rays are enough to completely capture all of the intervals. To reduce the amount of information stored, we do not store rising and falling edges when a point's normal is facing away from the light source. Because back-facing pixels will be dark anyway, this decision will save space and have no effect on the rendered image.

Computing visibility functions can be done by any ray tracer with the right level of programmability. We computed all data for our scene using a custom shader in the mental ray software package. Computing these textures can be time-consuming, because you have to cast 256 rays for every pixel in the occlusion interval map. For the scene in "Last Chance Gas," it took several hours to compute the shadowing for the entire scene.

We store the rise vector and the fall vector in two sets of color textures, each texture having four channels. A "rise" texture stores the beginning of a light interval in each channel, and the matching "fall" texture stores the ends of the light intervals. It will become obvious why we divide the textures up like this when we describe the algorithm for rendering with occlusion interval maps.

To alleviate the extra memory requirements of storing the occlusion interval maps, we compute our maps at half the size of color textures, which reduces the storage requirements by a factor of four. The resolution of occlusion interval maps can be reduced because the softness of the shadows has a blurring effect that makes up for the lower resolution. In some cases, we found that we could even lower the resolution of the maps beyond half the color texture sizes without noticeable artifacts.

When rendering, we have to average the visibility function over an interval of parameter values. In mathematical terms, this means performing a convolution with a window function of width dt. The equation for this calculation is: 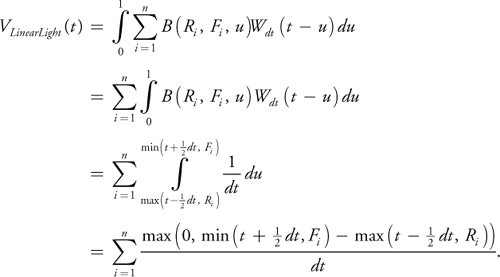 Using the preceding equation, we can easily calculate soft shadowing for a single rise/fall pair using just min, max, and subtraction. Fortunately, we optimize this even further. Because shader instructions operate on four-component vectors, four intervals can be done simultaneously at the same cost of doing a single interval. This is why we pack the rises and falls into separate textures. The final Cg code is shown in Listing 13-1.

Note that saturate(x) is used in place of max(0, x). The two operations will always be equivalent because the quantity being considered is the width of the visible light source interval, which is always less than 1. We choose to use saturate(x) over max(0, x) because it can be applied as an output modifier, saving an instruction. We used the 16-bit half data type and found it perfectly suited to our needs, because our calculations exceeded the range of fixed precision but did not require full 32-bit floating point.

The dot product on the last line of Listing 13-1 is not used for its usual geometric purpose; we use it to simultaneously divide by the light source width and add together the shadow values that are computed in parallel. We pass the values to the shader as intervalStart = t - 1/2dt, intervalEnd = t + 1/2dt, and intervalInverseWidth = 1/dt.

This shader compiles to only six assembly-code instructions for the GeForce FX: two texture lookups, a min, a max, a subtraction with a saturate modifier, and a dot product. The function computes up to four intervals' worth of shadows. If there are multiple rise and fall textures, we just call the function multiple times and add the results together.

As previously discussed, the technique works only for static scenes with a single light traveling on a fixed trajectory. This means it would not work for shadowing on characters and other dynamic objects, but it is well suited for shadowing in static outdoor environments. 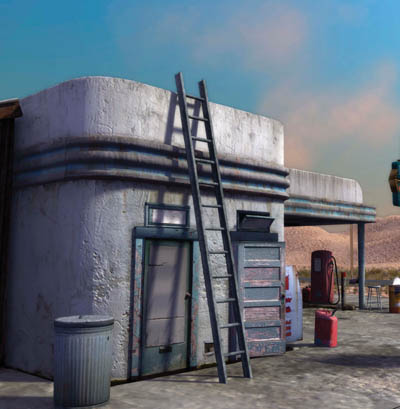 Rendering soft shadows in real time is an extremely difficult problem. Figures 13-5 and 13-6 show two examples of the subtleties involved. Precomputed visibility techniques produce soft shadows by imposing assumptions on the scene and on the light source. In the case of occlusion interval maps, we trade generality for performance to obtain a soft shadow algorithm that runs in real time on static scenes. Occlusion interval maps can act as a replacement for static light maps, allowing dynamic effects such as the variation of lighting from sunrise to sunset, as in "Last Chance Gas." 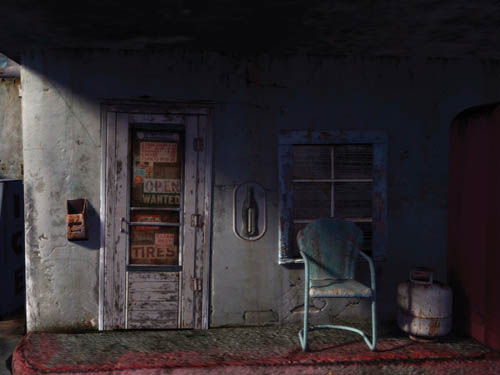 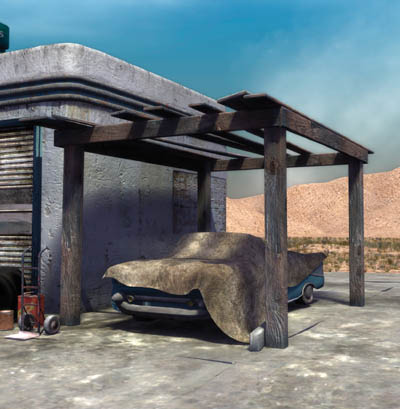 Figure 13-6 Shadows on the Car's Tarp