To simulate an idyllic nature scene in a realistic fashion, besides detailed trees and bushes, as well as a complex water and sky dome simulation, we need a high-quality grass effect. We must be able to cover large areas of the terrain with it, without monopolizing the GPU. The grass should look naturally grown and should wave realistically in the wind.

In the past, a high-quality grass simulation would have been considered too complex for real-time applications. The Codecreatures Benchmark (published by Codecult in 2002) disproved this pessimistic assertion. See Figure 7-1. In this chapter, we describe a flexible, widely applicable grass simulation based on the grass effect shown in the benchmark. Additionally, a special version of our Codecreatures Benchmark application is included in this book's accompanying material, which offers an interactive demo mode. 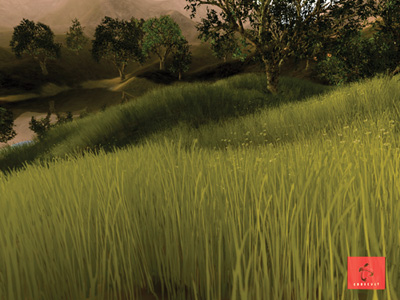 First, we should realize that a detailed modeling of the individual blades of grass is not meaningful, because the number of polygons that would be required for larger meadows would be much too high. A scene with countless blades of polygonal grass would not be displayable in real time with the graphics hardware available today.

So we have to build a simple and useful alternative that meets the following conditions:

In the next section, we build grass objects that meet these conditions.

Additionally, we must be able to animate the grass realistically. In Section 7.4, we discuss three different animation methods.

7.3 Preparation of the Grass Objects

As we just mentioned, many blades of grass must be represented by few polygons. We start by solving this problem. Independent of the camera position and direction, the appearance should be like that of an open countryside. Fortunately, the solution is not too difficult. In Section 7.3.1, we start by combining several blades of grass and displaying them in one texture. But this is not enough: some polygons that use this texture must be combined in such a way that the individual polygons are not noticeable (see Section 7.3.2). When the viewer moves around, we add or remove grass objects in the distance by blending them in or out. This ensures that the complete grass effect will have robust visual quality.

Now let us see how to build a texture for the task we have to solve. The required texture has to cluster several blades of grass; otherwise, it will have large transparent areas. We obtain this simply by drawing solid grass stems in a transparent alpha channel. In the color channel, we should use different shades of green and yellow to get a better differentiation of single blades. We may want to simulate blades of grass in good and bad conditions, to represent differences in age or ripeness, and even to distinguish front and back faces of the blades.

A concrete example of a grass texture is shown in Figure 7-2. 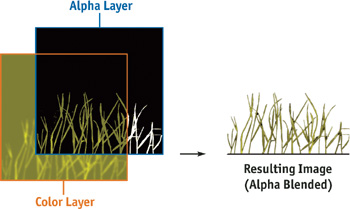 Figure 7-2 Schematic of a Grass Texture

This section explains how to combine some polygons, mapped with the grass texture built in the previous section, in a way that the simulated grass appears dense, and without highlighting individual polygons. The technique also guarantees that the individual polygons are not visible.

Because the user can navigate freely through the scene, a construction similar to the one shown in Figure 7-3 would be insufficient to produce a convincing effect. A linear arrangement of the grass polygons would immediately make the structure recognizable if someone were to view the scene perpendicular relative to the direction of the polygons. Additionally, the grass would look very thin in this case. An arrangement like this one should be considered only with automatic camera navigation or unreachable, far-distant meadows. 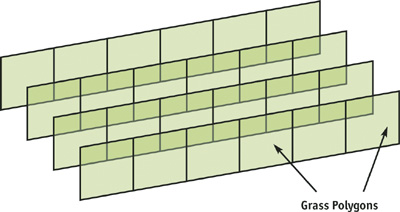 To ensure good visual quality independent of the current line of sight, we have to cross the grass polygons. Using configurations that look like stars proves very worthwhile. Figure 7-4 presents two possible variants of "grass objects," consisting of three intersecting quads. We have to render the polygons with disabled back-face culling to achieve visibility on both sides. To attain proper illumination, we should orient the normal vectors of all vertices parallel to the polygons' vertical edges. This guarantees correct lighting for all grass objects situated on slopes, with no differences due to the brightness of the terrain. 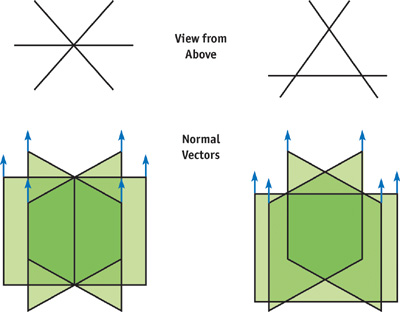 If we set these grass objects quite close together in a large area, as shown in Figure 7-5, sort them back-to-front at runtime, use alpha blending, and enable z-testing/writing in the draw call, then the impression of a naturally and thickly grown meadow appears.

Figure 7-5 An Expanse of Grass

To continue with the next step, we want to realistically animate the grass of a complete meadow, built with "grass objects" like those presented in Figure 7-5. This section describes three different variants of animation. Each has its pros and cons. Section 7.4.1 presents the general idea of our animation methods. In Section 7.4.2, clusters of several grass objects standing close together are animated in the same way. In Section 7.4.3, each vertex gets its own translation vector. Finally, in Section 7.4.4, we try to find the golden mean: a different animation for each grass object.

In order to achieve a highly realistic animation, we are going to use a calculation based on trigonometric functions, especially sine and cosine. This calculation should take into account the position that has to be moved (whether it is a vertex or the center of an object or cluster) and the current time. Also, the direction and strength of the prevailing wind will be factors. Each of our techniques moves only the upper vertices of the grass objects. In a vertex shader it is easy to differentiate between these vertices and the lower ones by examining the texture coordinates. All upper vertices should have the same v coordinate for the grass texture: such as zero, or a value close to it. The framework in the vertex shader code, as shown in Listing 7-1, is the same in all three techniques; only the pure animation part differs. The animation code can be found in the following sections.

Example 7-1. Framework in the Vertex Shader

7.4.2 Animation per Cluster of Grass Objects

The following method was used in the Codecreatures Benchmark and produces a realistic look with gusting winds that constantly change strength and direction. Here, the shift of the upper polygon vertices happens uniformly for a group of nearby grass objects. To produce a natural-looking animation, we should select a cluster size that is not too large. See Figure 7-6.

The translation vector for the animation is computed by the CPU and is handed over to the vertex shader as a constant parameter. Using a more expensive algorithm on the CPU allows us to take advantage of a very complex wind simulation. Because we supply each cluster of grass objects with its own translation vector, we have to change this constant parameter for each cluster. So we have to interrupt the rendering of a complete meadow quite often and use a separate draw call for each cluster.

Example 7-2. Code for Animation per Cluster of Grass Objects

One of the main problems with the method discussed in Section 7.4.2 is poor performance because of the high number of draw calls, which individually render only a small number of polygons. It would be better if we could render a large area covered with grass by using a much lower number of draw calls. However, we have to relocate the complete animation computation into the vertex shader to be able to move each vertex separately, relative to its position. See Figure 7-7.

Because the translations for each vertex are computed individually, the length of the edge between the upper vertices of the grass polygons is no longer constant, as shown in Figure 7-8. Therefore, visible distortions may appear because of the inconstant length and thickness of each blade of grass, but typically these artifacts will not be very noticeable.

Additionally, the overall effect may seem more unnatural than in the previous method. Because the translation of all vertices in a nearby region is very similar, an absence of local chaos and a very homogeneous animation results. We are able to eliminate this disadvantage by using a pseudo-random function in the vertex shader to achieve more varied results.

Example 7-3. Code for Animation per Vertex

To increase the apparent visual complexity of the animation based on the methods presented in Sections 7.4.2 and 7.4.3, we combine an undistorted grass texture and a low number of draw calls with local chaos—and thereby gain the advantages of both methods. We are able to combine these methods because we do not compute the animation for each vertex based on its position; rather, we do it based on the center position of the grass object—each consisting of three intersecting quads (see Section 7.3.2). Because neighboring grass objects now have different animations, we can represent the desired local chaos, as shown in Figure 7-9. Additionally, the constant animation for each grass object prevents the horizontal texture distortions. 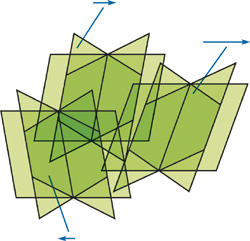 To make this possible, each vertex must know the center position of its object, either relative to its position or absolute in the world. The grass object position vector needed for this information must be in the vertex format (that is, stored in texture coordinates), because the vertex shader has to read this value.

We have succeeded in building a realistic grass simulation that meets the three most important requirements:

A special version of the Codecreatures Benchmark application, offering an interactive demo mode as shown in Figure 7-10, can be found on the book's CD or Web site. In the application, you can navigate using a free camera and switch the render states. You are encouraged to examine this application and take a look behind the scenes! 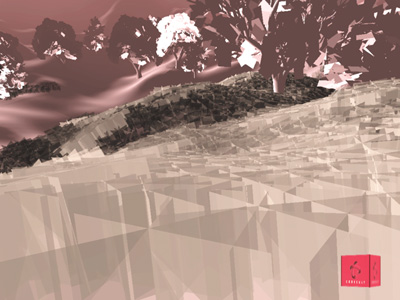 Figure 7-10 Screenshot of the Codecreatures Benchmark

If you are interested in doing some more research on simulating animated grass, here are some resources that deal with this subject.

You can find articles that describe vertex shaders using a sine function to do the procedural animation of the grass geometry here:

Other demos presenting grass effects are available on the following two Web sites. These two demos also use vertex shaders to calculate the waving motions of the grass geometry:

I would like to thank my colleagues at Piranha Bytes and Codecult who contributed to the Codecreatures Benchmark, especially Horst Dworczak (Lead Artist), who had the idea to build and animate the grass objects in the way presented in the Benchmark; and Oliver Hoeller (Lead Programmer), who helped to integrate the complete effect into the engine.