Inside NVIDIA Grace CPU: NVIDIA Amps Up Superchip Engineering for HPC and AI 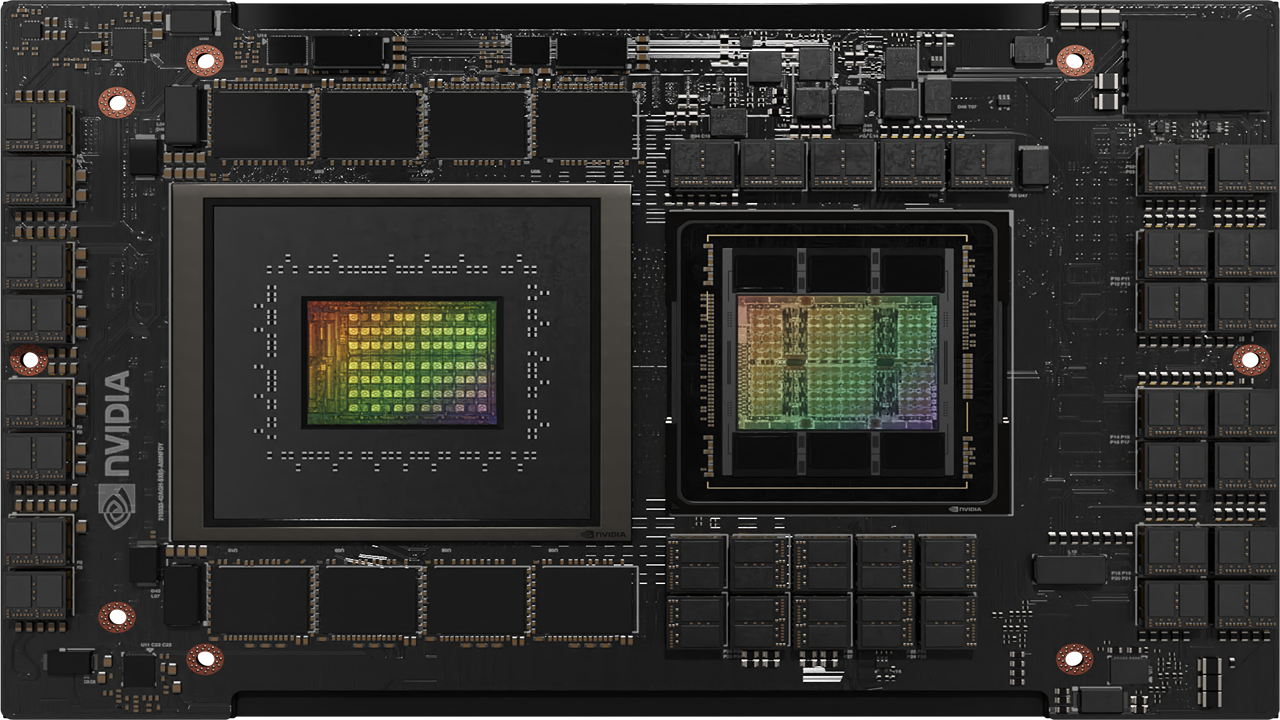 NVIDIA Grace CPU is the first data center CPU developed by NVIDIA. It has been built from the ground up to create the world’s first superchips.

Grace CPU was built to pair with either the NVIDIA Hopper GPU to create the NVIDIA Grace CPU Superchip  for large-scale AI training, inference, and HPC, or with another Grace CPU to build a high-performance CPU to meet the needs of HPC and cloud computing workloads.

Read on to learn about the key features of Grace CPU.

Both the Grace Hopper and Grace Superchips are enabled by the NVIDIA NVLink-C2C high-speed chip-to-chip interconnect, which serves as the backbone for the superchip communication.

With 900 GB/s of raw bidirectional bandwidth between dies on the package, NVLink-C2C provides 7x the bandwidth of a PCIe Gen 5 x16 link (the same bandwidth that is available between NVIDIA Hopper GPUs when using NVLink) and with lower latency. NVLink-C2C also requires just 1.3 picojoules/bit transferred, which is more than 5x the energy efficiency of PCIe Gen 5.

NVLink-C2C is also a coherent interconnect, which enables coherency when programming both a standard coherent CPU platform using the Grace CPU Superchip, as well as a heterogeneous programming model with the Grace Hopper Superchip.

NVIDIA Grace CPU Superchip is built to provide software developers with a standards-compliant platform. Arm provides a set of specifications as part of its Arm SystemReady initiative, which aims to bring standardization to the Arm ecosystem.

Grace CPU targets the Arm system standards to offer compatibility with off-the-shelf operating systems and software applications, and Grace CPU will take advantage of the NVIDIA Arm software stack from the start.

Grace CPU also includes Arm Performance Monitoring Units, allowing for the performance monitoring of the CPU cores as well as other subsystems in the system-on-a-chip (SoC) architecture. This enables standard tools, such as Linux perf, to be used for performance investigations.

Combining a Grace CPU with a Hopper GPU, the NVIDIA Grace Hopper Superchip expands upon the CUDA Unified Memory programming model that was first introduced in CUDA 8.0.

The Hopper GPU can also access pageable memory allocations. Grace Hopper Superchip allows programmers to use system allocators to allocate GPU memory, including the ability to exchange pointers to malloc memory with the GPU.

NVLink-C2C enables native atomic support between the Grace CPU and the Hopper GPU, unlocking the full potential for C++ atomics that were first introduced in CUDA 10.2.

Grace CPU introduces the NVIDIA Scalable Coherency Fabric (SCF). Designed by NVIDIA, SCF is a mesh fabric and distributed cache designed to scale to the needs of the data center. SCF provides 3.2 TB/s of bisection bandwidth to ensure the flow of data traffic between NVLink-C2C, CPU cores, memory, and system IOs.

A single Grace CPU incorporates 72 CPU cores and 117MB of cache, but SCF is designed for scalability beyond this configuration. When two Grace CPUs are combined to form a Grace Superchip, these figures double to 144 CPU cores and 234MB of L3 cache, respectively.

The CPU cores and SCF Cache partitions (SCCs) are distributed throughout the mesh. Cache Switch Nodes (CSNs) route data through the fabric and serve as interfaces between the CPU cores, cache memory and the rest of the system, enabling high-bandwidth throughout.

Grace CPU incorporates support for Memory System Resource Partitioning and Monitoring (MPAM) capability, which is the Arm standard for partitioning both system cache and memory resources.

MPAM works by assigning partition IDs (PARTIDs) to requestors within the system. This design allows resources such as cache capacity and memory bandwidth to be partitioned or monitored based on their respective PARTIDs.

The SCF Cache in Grace CPU supports both the partitioning of cache capacity as well as memory bandwidth using MPAM. Additionally, Performance Monitor Groups (PMGs) can be used to monitor resource usage.

To deliver excellent bandwidth and energy efficiency, Grace CPU implements a 32-channel LPDDR5X memory interface. This provides memory capacity of up to 512 GB and memory bandwidth of up to 546 GB/s.

The GPU-to-GPU NVLink and NVLink-C2C bidirectional bandwidths are matched in a superchip, which enables the Hopper GPUs to access the Grace CPU memory at NVLink native speeds.

The selection of LPDDR5X for Grace CPU was driven by the need to strike the optimal balance of bandwidth, energy efficiency, capacity, and cost for large-scale AI and HPC workloads.

While a four-site HBM2e memory subsystem would have provided substantial memory bandwidth and good energy efficiency, it would do so at more than 3x the cost-per-gigabyte of either DDR5 or LPDDR5X.

Additionally, such a configuration would be limited to a capacity of only 64 GB, which is one-eighth the maximum capacity available to the Grace CPU with LPDDR5X.

Compared to a more traditional eight-channel DDR5 design, the Grace CPU LPDDR5X memory subsystem provides up to 53% more bandwidth and is substantially more power efficient, requiring just an eighth of the power per gigabyte.

The excellent power efficiency of LPDDR5X enables allocating more of the total power budget to compute resources, such as the CPU cores or GPU streaming multiprocessors (SMs).

This connectivity is in addition to the on-die NVLink-C2C link that can be used to connect Grace CPU to either another Grace CPU or to an NVIDIA Hopper GPU.

The combination of NVLink, NVLink-C2C, and PCIe Gen 5 provides the Grace CPU with the rich suite of connectivity options and ample bandwidth needed to scale performance in the modern data center.

NVIDIA Grace CPU is designed to deliver excellent compute performance in both single-chip as well as Grace Superchip configurations, with estimated SPECrate2017_int_base scores of 370 and 740, respectively. These pre-silicon estimates are based on use of the GNU Compiler Collection (GCC).

Memory bandwidth is critical to the workloads for which the Grace CPU was designed, and in the Stream Benchmark, a single Grace CPU is expected to deliver up to 536 GB/s of realized bandwidth, representing more than 98% of the chip’s peak theoretical bandwidth.

And, finally, the bandwidth between the Hopper GPU and the Grace CPU is critical to maximizing the performance of the Grace Hopper Superchip. GPU-to-CPU memory reads and writes are expected to be 429 GB/s and 407 GB/s, respectively, representing more than 95% and more than 90% of the peak theoretical unidirectional transfer rates of NVLink-C2C.

Combined read and write performance is expected to be 506 GB/s, representing over 92% of the peak theoretical memory bandwidth available to a single NVIDIA Grace CPU SoC.

About Jonathon Evans
Jonathon Evans is an NVIDIA Distinguished Engineer and architecture lead for the NVIDIA Grace CPU. Jonathon joined NVIDIA in 2007 as a member of the GPU Architecture team. His prior work on GPU includes leading the GPU’s context management and scheduling HW team, and contributions to Async Compute, Unified Memory, Multi Instance GPU, and WDDM HW Scheduling.
View all posts by Jonathon Evans