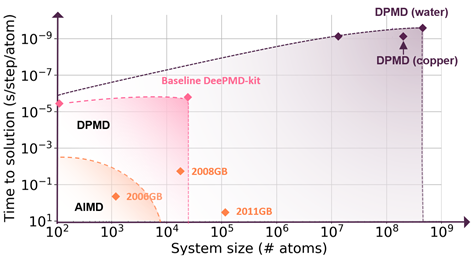 Molecular simulation communities have faced the accuracy-versus-efficiency dilemma in modeling the potential energy surface and interatomic forces for decades. Deep Potential, the artificial neural network force field, solves this problem by combining the speed of classical molecular dynamics (MD) simulation with the accuracy of density functional theory (DFT) calculation.1 This is achieved by using the GPU-optimized package DeePMD-kit, which is a deep learning package for many-body potential energy representation and MD simulation.2

This post provides an end-to-end demonstration of training a neural network potential for the 2D material graphene and using it to drive MD simulation in the open-source platform Large-scale Atomic/Molecular Massively Parallel Simulator (LAMMPS).3 Training data can be obtained either from the Vienna Ab initio Simulation Package (VASP)4, or Quantum ESPRESSO (QE).5

A seamless integration of molecular modeling, machine learning, and high-performance computing (HPC) is demonstrated with the combined efficiency of molecular dynamics with ab initio accuracy — that is entirely driven through a container-based workflow. Using AI techniques to fit the interatomic forces generated by DFT, the accessible time and size scales can be boosted several orders of magnitude with linear scaling.

Deep potential is essentially a combination of machine learning and physical principles, which start a new computing paradigm as shown in Figure 1.

The entire workflow is shown in Figure 2. The data generation step is done with VASP and QE. The data preparation, model training, testing, and compression steps are done using DeePMD-kit. The model deployment is in LAMMPS.

A container is a portable unit of software that combines the application, and all its dependencies, into a single package that is agnostic to the underlying host OS.

The workflow in this post involves AIMD, DP training, and LAMMPS MD simulation. It is nontrivial and time-consuming to install each software package from source with the correct setup of compiler, MPI, GPU library, and optimization flags.

Containers solve this problem by providing a highly optimized GPU-enabled computing environment for each step, and eliminates the time to install and test software.

These containers are also scanned for Common Vulnerabilities and Exposure (CVEs), ensuring that they are devoid of any open ports and malware. Additionally, the HPC containers support both Docker and Singularity runtimes, and can be deployed on multi-GPU and multinode systems running in the cloud or on-premises.

The first step in the simulation is data generation. We will show you how you can use VASP and Quantum ESPRESSO to run AIMD simulations and generate training datasets for DeePMD. All input files can be downloaded from the GitHub repository using the following command:

A two-dimensional graphene system with 98-atoms is used as shown in Figure 3.6 To generate the training datasets, 0.5ps NVT AIMD simulation at 300 K is performed. The time step chosen is 0.5fs. The DP model is created using 1000 time steps from a 0.5ps MD trajectory at a fixed temperature.

Due to the short simulation time, the training dataset contains consecutive system snapshots, which are highly correlated. Generally, the training dataset should be sampled from uncorrelated snapshots with various system conditions and configurations. For this example, we used a simplified training data scheme. For production DP training, using DP-GEN is recommended to utilize the concurrent learning scheme to efficiently explore more combinations of conditions.7

The projector-augmented wave pseudopotentials are employed to describe the interactions between the valence electrons and frozen cores. The generalized gradient approximation exchange−correlation functional of Perdew−Burke−Ernzerhof. Only the Γ-point was used for k-space sampling in all systems.

The AIMD simulation can also be carried out using Quantum ESPRESSO, available as a container from the NGC Catalog. Quantum ESPRESSO is an integrated suite of open-source computer codes for electronic-structure calculations and materials modeling at the nanoscale based on density-functional theory, plane waves, and pseudopotentials. The same graphene structure is used in the QE calculations. The following command can be used to start the AIMD simulation:

Once the training data is obtained from AIMD simulation, we want to convert its format using dpdata so that it can be used as input to the deep neural network. The dpdata package is a format conversion toolkit between AIMD, classical MD, and DeePMD-kit.

You can use the convenient tool dpdata to convert data directly from the output of first-principles packages to the DeePMD-kit format. For deep potential training, the following information of a physical system has to be provided: atom type, box boundary, coordinate, force, viral, and system energy.

A snapshot, or a frame of the system, contains all these data points for all atoms at one-time step, which can be stored in two formats, that is raw and npy.

The first format raw is plain text with all information in one file, and each line of the file represents a snapshot. Different system information is stored in different files named as box.raw, coord.raw, force.raw, energy.raw, and virial.raw. We recommended you follow these naming conventions when preparing the training files.

The coordinate file coord.raw is organized similarly. In box.raw, the nine components of the box vectors should be provided on each line. In virial.raw, the nine components of the virial tensor should be provided on each line in the order XX XY XZ YX YY YZ ZX ZY ZZ. The number of lines of all raw files should be identical. We assume that the atom types do not change in all frames. It is provided by type.raw, which has one line with the types of atoms written one by one.

The atom types should be integers. For example, the type.raw of a system that has two atoms with zero and one:

It is not a requirement to convert the data format to raw, but this process should give a sense on the types of data that can be used as inputs to DeePMD-kit for training.

The easiest way to convert the first-principles results to the training data is to save them as numpy binary data.

For VASP output, we have prepared an outcartodata.py script to process the VASP OUTCAR file. By running the commands:

A folder called deepmd_data is generated and moved to the training directory. It generates five sets 0/set.000, 1/set.000, 2/set.000, 3/set.000, 4/set.000, with each set containing 200 frames. It is not required to take care of the binary data files in each of the set.* directories. The path containing the set.* folder and type.raw file is called a system. If you want to train a nonperiodic system, an empty nopbc file should be placed under the system directory. box.raw is not necessary as it is a nonperiodic system.

We are going to use three of the five sets for training, one for validating, and the remaining one for testing.

The input of the deep potential model is a descriptor vector containing the system information mentioned previously. The neural network contains several hidden layers with a composition of linear and nonlinear transformations. In this post, a three layer-neural network with 25, 50 and 100 neurons in each layer is used. The target value, or the label, for the neural network to learn is the atomic energies. The training process optimizes the weights and the bias vectors by minimizing the loss function.

The training is initiated by the command where input.json contains the training parameters:

The DeePMD-kit prints detailed information on the training and validation data sets. The data sets are determined by training_data and validation_data as defined in the training section of the input script. The training dataset is composed of three data systems, while the validation data set is composed of one data system. The number of atoms, batch size, number of batches in the system, and the probability of using the system are all shown in Figure 4. The last column presents if the periodic boundary condition is assumed for the system.

During the training, the error of the model is tested every disp_freq training step with the batch used to train the model and with numb_btch batches from the validating data. The training error and validation error are printed correspondingly in the file disp_file (default is lcurve.out). The batch size can be set in the input script by the key batch_size in the corresponding sections for training and validation data set.

An example of the output:

The training error reduces monotonically with training steps as shown in Figure 5. The trained model is tested on the test dataset and compared with the AIMD simulation results. The test command is:

The results are shown in Figure 6.

After the model has been trained, a frozen model is generated for inference in MD simulation. The process of saving neural network from a checkpoint is called “freezing” a model:

After the frozen model is generated, the model can be compressed without sacrificing its accuracy; while greatly speeding up the inference performance in MD. Depending on simulation and training setup, model compression can boost performance by 10X, and reduce memory consumption by 20X when running on GPUs.

A new pair-style has been implemented in LAMMPS to deploy the trained neural network in prior steps. For users familiar with the LAMMPS workflow, only minimal changes are needed to switch to deep potential. For instance, a traditional LAMMPS input with Tersoff potential has the following setting for potential setup:

To use deep potential, replace previous lines with:

The pair_style command in the input file uses the DeePMD model to describe the atomic interactions in the graphene system.

The system configuration after NVT relaxation is shown in Figure 7. It can be observed that the deep potential can describe the atomic structures with small ripples in the cross-plane direction. After 10ps NVT relaxation, the system is placed under NVE ensemble to check system stability.

The system temperature is shown in Figure 8.

To validate the accuracy of the trained DP model, the calculated radial distribution function (RDF) from AIMD, DP and Tersoff, are plotted in Figure 9. The DP model-generated RDF is very close to that of AIMD, which indicates that the crystalline structure of graphene can be well presented by the DP model.

This post demonstrates a simple case study of graphene under given conditions. The DeePMD-kit package streamlines the workflow from AIMD to classical MD with deep potential, providing the following key advantages:

Furthermore, the use of GPU-optimized containers from the NGC catalog simplifies and accelerates the overall workflow by eliminating the steps to install and configure software. To train a comprehensive model for other applications, download the DeepMD Kit Container from the NGC catalog.

About Jingchao Zhang
Jingchao Zhang is a senior solutions architect with the NVIDIA Higher Education and Research team. He is also a resident scientist at the University of Florida NVIDIA AI Technology Center (NVAITC). He got his Ph.D. in mechanical engineering from Iowa State University. Prior joining NVIDIA, he worked in the field of research computing for 8 years. His research interests include computational materials science and machine learning.
View all posts by Jingchao Zhang 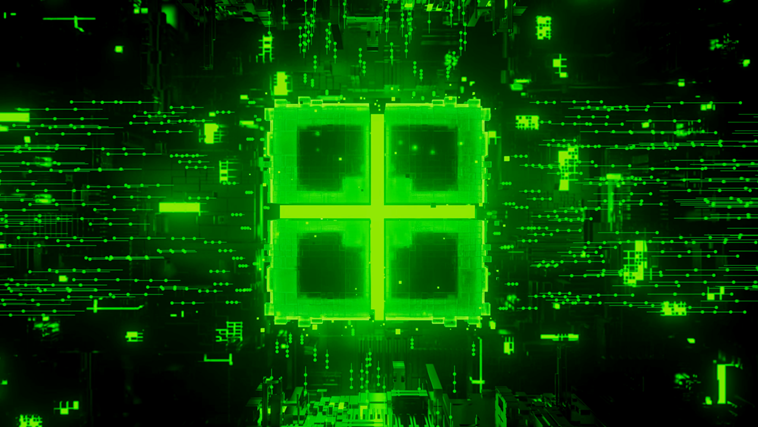 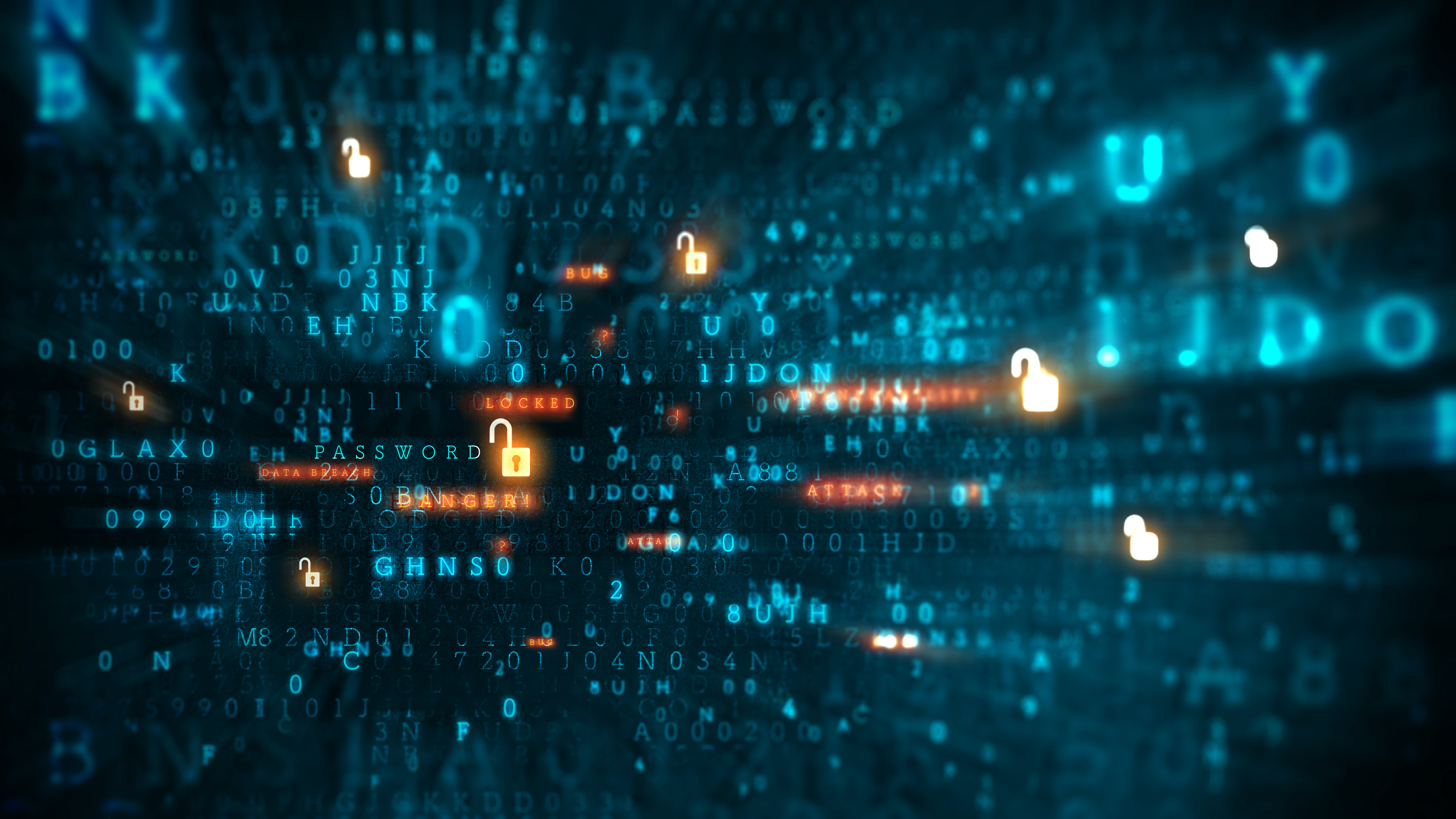