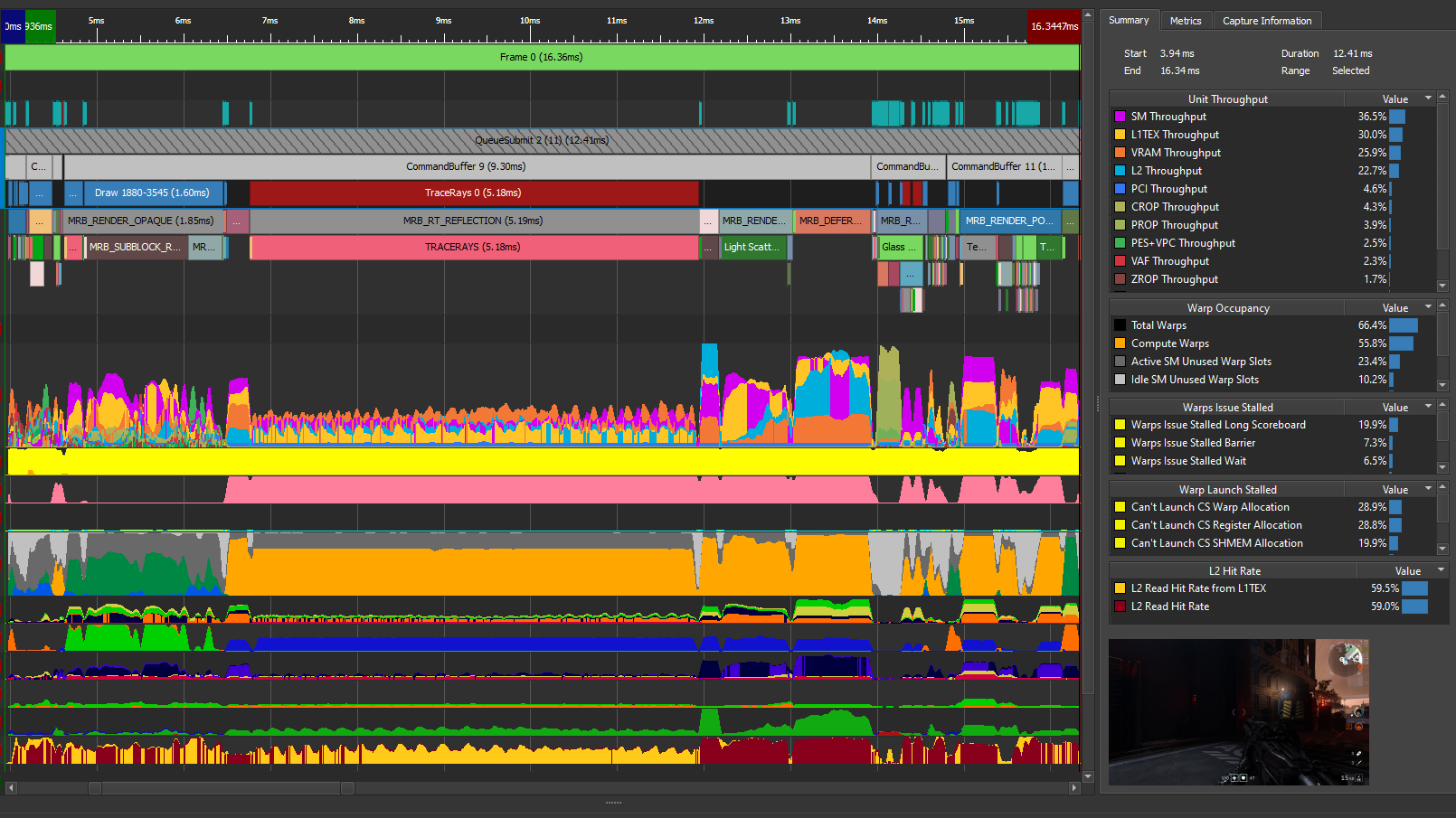 Many GPU performance analysis tools are based on a capture and replay mechanism, where a frame is first captured (either in-memory or to disk), and then replayed multiple times to be profiled. Nsight Graphics: GPU Trace differs in that it directly profiles the frames emitted by a live application, with no constraint on subsequent frames to be identical. This approach makes the tool simpler than replay-based profilers, and therefore less likely to fail as graphics APIs evolve.

In a GDC 2019 talk, we showed how to apply the top-down P3 performance-triage method for optimizing any DX12 GPU workload using GPU Trace. One year later, with the release of Nsight Graphics 2020.2, the tool has evolved substantially. First, it now officially supports the Vulkan API (and all extensions, including VK_NV_ray_tracing). Second, it has a new “Advanced Mode”, which captures additional metrics over subsequent frames and presents them in a single view.

Specifically, in release 2020.2, the Advanced Mode metrics are:

In this post, we show how to apply the P3 method using a performance-optimization example from Wolfenstein: Youngblood (VKR).

To capture GPU Trace data from a VK or DX12 app, you must first launch the app through Nsight Graphics and make sure that the tool is ready to capture. Multiple captures can then be taken from the same game session.

Launching an app through GPU Trace

To take a GPU Trace capture with the new advanced mode metrics:

Here are some notes on using Advanced Mode Metrics:

To make sure that GPU Trace has successfully attached itself to the application, you can ALT-Tab back to Nsight Graphics and check that you see the Generate GPU Trace Capture button:

When you are ready to take your first GPU Trace capture, perform the following steps:

You can now take as many additional captures as needed to study the impact that any change has on GPU performance.

When GPU Trace opens the capture, the initial view looks like this, for a frame from Wolfenstein: Youngblood RTX:

Before taking our GPU Trace captures from a session of the game, we did the following by typing console variables in the game:

This is something you’d want to do anyway to compare two captures before and after making a change to the shaders. It’s even more important to remove frame-to-frame differences in the workloads when capturing advanced mode metrics, as these are captured from separate frames as the metric graphs.

Selecting a GPU workload to study

In this vkQueueSubmit call, the longest GPU workload is the Ray-Traced Reflections (MRB_RT_REFLECTIONS / TRACERAYS), taking 5.18 ms (42% of the main QueueSubmit call) in this frame on RTX 2080 with locked clocks.

Double-click on this workload in the timeline, and the tool zooms in on that workload. The metrics in the right-side panel are updated to the associated time range:

Now that we’ve selected a workload to focus on, we can apply the P3 (Peak Performance Percentage) method. The first step is to look at the GPU Active% metric:

This metric counts the percentage of the time that the Graphics/Compute Engine or the Copy Engines are active and GPU Trace displays it on the GPU Active metric graph. In this workload, GPU Active is 100.0% (as expected, as this is a single vkCmdTraceRaysNV):

If that value was lower than 95%, we would know that there was 5% of the time where the GPU was fully idle. It may make sense to switch to using Nsight Systems to figure out what on the CPU side is limiting the performance.

The next step of the P3 method is to look at the Top Throughput metrics per GPU unit, sorted in decreasing order:

In GPU Trace, these are shown on the Unit Throughputs graph, and in the Summary section of the right pane:

As we can see in the Summary tab, the Top Throughput (aka the Top SOL%) metrics per GPU unit for the RT Reflections workload are:

To copy and paste the metric names and values, select multiple rows, right-click, and choose Copy.

The top unit throughput% metric is the VRAM, and it’s very poor (<< 60%), so according to the P3 method, this workload is VRAM latency limited and you should reduce the number of VRAM accesses to speed it up.

To achieve this, we want to know what kind of VRAM accesses are performed by this workload. On all NVIDIA GPUs after at least Fermi, all VRAM traffic goes through the L2 cache, so we can use L2 metrics to understand what requests are made to the VRAM.

Let’s use the new advanced mode metrics L2 Traffic Breakdown by Source Unit. Select the regime to study by clicking on it in the timeline. In the right pane, on the Metrics tab, type “srcunit” in the search box. The tool displays the metrics in decreasing order:

Now, let’s take a look at the L1TEX and L2 hit rates by searching for “hit” on the Metrics tab:

It turned out that the hit shaders of this RT Reflections workload were fetching all 2D textures with the MIP level hardcoded to 0 for simplicity, because that was the easiest thing to do to get RT Reflections off the ground.

A well-known way to reduce the L2 working set size of the 2D texture fetches is to use mipmapping, because only the MIP levels that are accessed are resident in L2, and coarser levels occupy less bytes. Mipmaps were already populated by the engine, so all we needed to do was to replace the hard-coded MIP=0 with some dynamic MIP level.

As you can see in the presentation, Ray Traced Reflections in Wolfenstein: Youngblood (free GTC Digital account required), we ended up implementing a dynamic LOD approximation inspired by Texture Level of Detail Strategies for Real-Time Ray Tracing by Tomas Akenine-Möller, and the other authors. The MIP level approximation for this post is a function of:

Before and after comparison

We implemented a dynamic MIP LOD in the hit shaders. After we were happy with it visually, we did a couple more GPU Trace captures from the same game session, still with paused game time, skipped RT acceleration structure updates, and static camera. The only change between the two captures was the MIP level calculation function (LOD=0 vs dynamic).

With the dynamic MIP LOD:

Now, let’s compare the before and after captures directly within GPU Trace by choosing Trace Compare…:

Searching for “throughput” in the Metrics Search field in the right pane makes the tool show all per-unit and per-subunit throughput% metrics for the current workload:

We see that the Top Unit Throughput metrics in the after capture are:

So the ray tracing workload was mainly VRAM latency–limited and no longer is, because the VRAM value is now far from being the top throughput metric. The L2 throughput has gone down slightly, which makes sense because there are less requests from L1TEX to L2, due to the slightly increased L1TEX hit rate.

The SM is now the top throughput unit, with a low SM throughput% (<<60%). To optimize it further, we should go down another branch of the decision tree of the P3 method and try to increase SM warp occupancy or decrease the SM warp latency. Increasing the SM warp occupancy earlier would have risked a slowdown due to increased VRAM pressure, while focusing on the high memory latency (and thus warp latency) had a greater chance to pay off.

I’d like to thank Dana Elifaz and Assaf Pagi for having made it possible for the Advanced Mode Metrics to ship in GPU Trace, as well as Avinash Baliga, Aurelio Reis, and Sebastien Domine for their support.