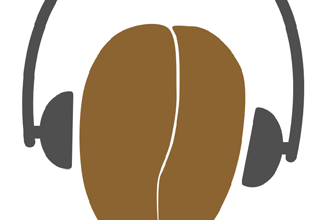 Speech processing is compute-intensive and requires a powerful and flexible platform to power modern conversational AI applications. It seemed natural to combine the de facto standard platform for automatic speech recognition (ASR), the Kaldi Speech Recognition Toolkit, with the power and flexibility of NVIDIA GPUs.

Kaldi adopted GPU acceleration for training workloads early on. NVIDIA began working with Johns Hopkins University in 2017 to better use GPUs for inference acceleration, by moving all the compute-intensive ASR modules to the GPU. For more information about previous and recent results, see NVIDIA Accelerates Real Time Speech to Text Transcription 3500x with Kaldi and GTC 2020: Accelerate your Online Speech Recognition Pipeline with GPUs.

In this post, we focus on other important improvements to the KALDI ASR pipeline: easy deployment of GPU-powered, low-latency streaming inference with the NVIDIA Triton Inference Server.

Triton Server is an open source inference serving software that lets teams deploy trained AI models from any framework (TensorFlow, TensorRT, PyTorch, ONNX Runtime, or a custom framework), from local storage or Google Cloud Platform or Amazon S3 on any GPU- or CPU-based infrastructure (cloud, data center, or edge). Triton Server provides a cloud inferencing service optimized for NVIDIA GPUs using an HTTP or gRPC endpoint, allowing remote clients to request inferencing for any model being managed by the server.

The following features are the most relevant for this post:

Figure 1 shows a typical pipeline for ASR. The raw input audio containing the utterances is processed to extract features which are sent to an acoustic model for probabilistic classification. Using the likelihoods produced by that classification, and with the help of a language model, you can determine the most likely transcription for that audio.

If you wait for the entire utterance to be emitted before streaming the audio, the GPU stays idle until it receives the data (Figure 3, a-b). At this point, a lot of processing needs to happen leading to large latency. To  reduce the latency and distribute the load on the GPU more uniformly, you need a better streaming and batch strategy.

An improvement over the earlier scenario is to build bigger batches by streaming multiple utterances emitted by multiple users—0, 1, 2 in Figure 3(c) —at the same time. While you may saturate the GPU in this way, you must still wait for the entire utterance to be produced to generate its transcription. A bigger batch, with even more computation to run, definitely increases latency.

You can further improve this approach by dividing each utterance into small chunks, that can be processed as soon as they are ready. Chunks are typically 100-500ms of audio. At the end of the utterance, you have only the last chunk to process. You end up with a much smaller latency, because you have much less work to do at the very end.

By combining both approaches, you can build large batches using small chunks from multiple utterances, as shown in Figure 3(c).

However, you can compute a batch much faster than that in real time. In the previous scenario, the GPU spends most of its time waiting for the next chunks to be ready. Remove this constraint by implementing multiplexing. Each batch slot is oversubscribed with many audio channels, picking at a given time any channel that is ready to be used.

We have implemented this solution and made it available in the Kaldi ASR framework. This work is based on the online GPU-accelerated ASR pipeline from GPU-Accelerated Viterbi Exact Lattice Decoder for Batched Online and Offline Speech Recognition. The paper included a high-performance implementation of a GPU HMM decoder, a low-latency neural net driver, fast feature extraction for preprocessing, and new ASR pipelines tailored for GPUs.

The integration of the Kaldi ASR framework with Triton Server then added gRPC interface and dynamic batching management for best performance. To download the repository containing the integration of Kaldi with Triton Server, see Kaldi/SpeechRecognition GitHub repo. We included a pretrained version of the Kaldi ASR LibriSpeech recipe for reference model and for demonstration purposes. The LibriSpeech dataset is a large (1,000 hours) corpus of read English speech.

Based on this integration (Figure. 4), a client connects to the gRPC server, streams audio by sending chunks to the server, and gets back the inferred text as an answer. For more information, see Kaldi ASR Quick Start. For testing purposes, this example comes with data for the client to simulate multiple parallel users by streaming multiple audio streams in parallel.

The server expects chunks of audio each containing a fixed but configurable amount of data samples (float array). This is a maximum value, so sending partial chunks is possible. Flags can be set to declare a chunk as a first chunk or last chunk for a sequence. Finally, each chunk from a given sequence is associated with a CorrelationID value. Every chunk belonging to the same sequence must be given the same CorrelationID value. Support for automatic end-pointing will be added in the future.

After the server receives the final chunk for a sequence, with the END flag set, it generates the output associated with that sequence and send it back to the client. The end of the sequencing procedure is as follows:

Even if only the best path is used, you are still generating a full lattice for benchmarking purposes. Partial results generated after each timestep are currently not available but will be added in a future release.

Start by running the server and then the Jupyter notebook client.

Run the Kaldi Triton Server in a Docker container. Install NVIDIA Docker as a prerequisite. For more information about how to get started with NGC containers, see the following:

The first step is to clone the repository:

Build the client and server containers:

Download and set up the pretrained model and evaluation dataset:

The model and dataset are downloaded in the /data folder.

By default, only GPU 0 is used. Multi-GPU support is planned for future release. Select a different GPU by using NVIDIA_VISIBLE_DEVICES:

The following command streams 1000 parallel streams to the server. The -p option prints the inferred text sent back from the server.

To better show the steps for carrying out inference with the Kaldi Triton backend server we are going to run the JoC/asr_kaldi Jupyter notebooks. You display the results of inference using a Python gRPC client in an offline context, that is with pre-recorded .wav files and in an online context by streaming live audio.

After this step, you should have Triton Server ready to serve ASR inference requests. The next step is to build a Triton Server client container:

Start the client container with the following command:

Within the client container, start the Jupyter notebook server:

Navigate a web browser to the IP address or hostname of the host machine at port 8888:

Use the token listed in the output from running the Jupyter command to log in, for example:

When the Jupyter notebook is running, you can do the following:

To measure performance of the inference server, you stream multiple (1000 or more) parallel streams to the server using the client available with the repository.

To run the performance client, run the following command:

The -p option prints the inferred text sent back from the server.

The client can be configured through a set of parameters that define its behavior. To see the full list of available options and their descriptions, use the -h command-line option.

Inference is done through simulating concurrent users. Each user is attributed to one utterance from the LibriSpeech dataset. It streams that utterance by cutting it into chunks and gets the final Text output after the final chunk has been sent. A parameter sets the number of active users being simulated in parallel.

For the performance of the ASR pipeline, we considered two factors: throughput and latency.

Throughput is measured using the inverse of the real-time factor (RTF) metric: the RTFX metric, which is defined as follows:

Where L is the length of the input audio in seconds and C is the compute time needed to transcribe it in seconds.

Latency is defined as the delay between the availability of the last chunk of audio and the reception of the transcription. Figure 5 shows the following tasks affecting latency:

So, the latency that you measure is defined as latency = t1 - t0.

Table 1 summarizes the results (RTFX and Latency) obtained for V100 and T4 across different numbers of parallel audio channels.

Support for Kaldi ASR models that are different from the provided LibriSpeech model is experimental. However, it is possible to modify the Model Path section of the config file model-repo/kaldi_online/config.pbtxt to set up your own model.

The models and Kaldi allocators are currently not shared between instances. This means that if your model is large, you may end up with not enough memory on the GPU to store two different instances. If that’s the case, you can set count to 1 in the instance_group section of the config file.

In this post, we described the integration between the Kaldi ASR framework and NVIDIA Triton Inference Server. For more information, see the Kaldi/SpeechRecognition GitHub repo.

A Jupyter notebook illustrates how the inference server is expecting requests and how to receive results. We also showed performance results that were obtained by using the performance client included.

Both the Triton Inference Server integration and the underlying Kaldi ASR online GPU pipeline are a work in progress and will support more functionality in the future. This includes online iVectors not currently supported in the Kaldi ASR GPU online pipeline and being replaced by a zero vector. For more information, see Known issues.

About Hugo Braun
Hugo Braun is a Senior AI Developer Technology Engineer at NVIDIA. With a background in mathematics and physics, he has been working on performance-oriented machine learning algorithms. His work at NVIDIA focuses on the design and implementation of high-performance GPU algorithms, specializing in deep learning and graph analytics. He holds a M.S. in Mathematics and Computer Science from Ecole Polytechnique, France.
View all posts by Hugo Braun 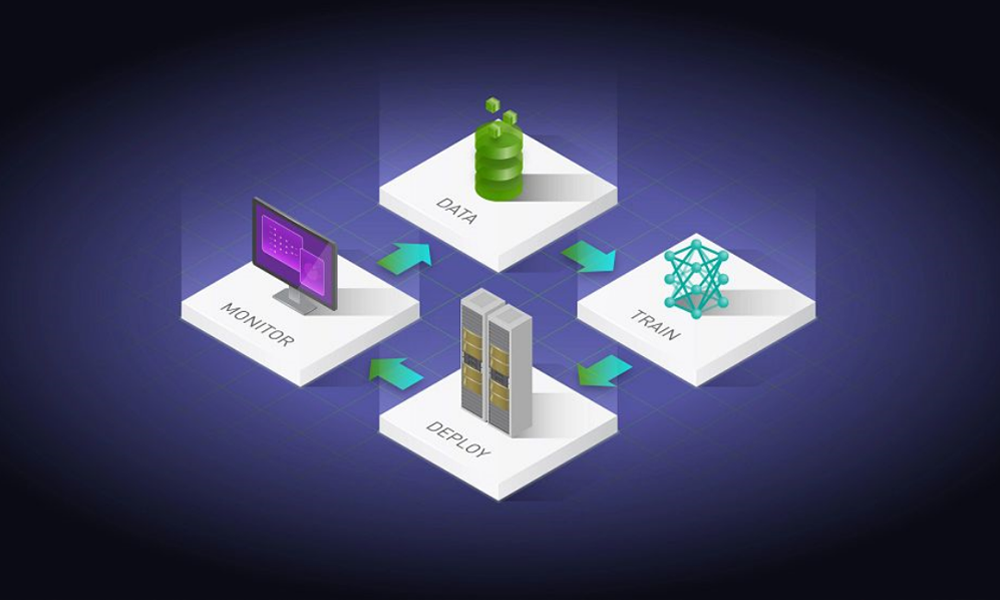 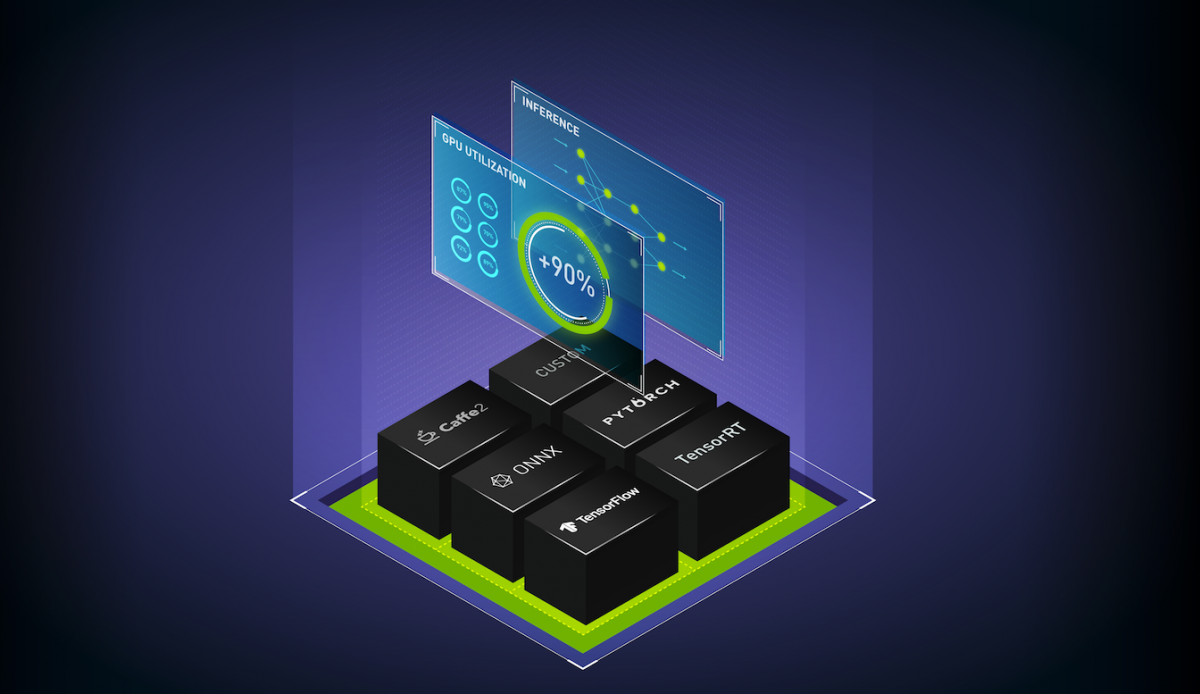