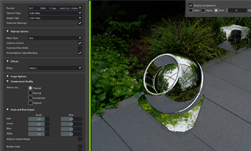 Today, we’re releasing the free NVIDIA Texture Tools Exporter, the new version of our DDS texture compression tool, available both as a standalone application and as a plugin for Adobe Photoshop.

This all-new release adds support for modern, CUDA-accelerated Texture Tools 3.0 compression (including ASTC, BC7, and BC6s), support for more than 130 DXGI and ASTC formats, linear-space, slope-space, and premultiplied alpha mipmapping, command-line and Photoshop automation, and a unified user interface.

Using GPU-accelerated block compression, you can reduce the size of your textures – whether it’s to make a game download faster, or to ship a title on a fewer number of disks, or to be able to fit more materials and objects into memory in a ray tracer.

But on top of that, GPUs can render from these textures while storing them compressed – meaning a ray tracer could use this to fit more textures and materials into memory, or a game engine could use this to render larger worlds than otherwise. It’s even possible to load block-compressed textures faster than many other formats, as their data can be copied almost directly into GPU memory and then used from there.

If you’re generating mipmaps at runtime, you can save time by using the NVIDIA Texture Tools Exporter to generate mipmaps instead.

Artists can open and save DDS files directly from Adobe Photoshop using the NVIDIA Texture Tools Exporter plug-in. This plug-in also supports Photoshop Actions – so you can record an action to convert an image to a normal map and compress it using BC7, for instance, and then bind that to a hotkey.

The standalone version also has a command-line and batch scripting interface in addition to a GUI. If you have a sequence of commands, such as:

Then you can turn this into a single batch file by removing nvtt_export.exe from each line:

And then run it using:

This will also be faster than launching nvtt_export.exe for each file, since the exporter only needs to be opened and closed once.

The new NVIDIA Texture Tools Exporter supports textures with transparency (BC7, ASTC), HDR images and cube maps in unfolded and linear formats (BC6s), normal maps (BC7, BC5, BC3n), and much more.

For more information and to download the free NVIDIA Texture Tools Exporter, go to https://developer.nvidia.com/nvidia-texture-tools-exporter!