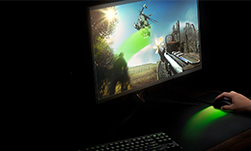 Measuring and optimizing system latency is one of the hardest challenges during game development and the NVIDIA Reflex SDK helps developers solve that issue. NVIDIA Reflex is an easy to integrate SDK that provides API to both measure and reduce system latency – giving players a more responsive experience.  Epic, Bungie, Respawn, Activision Blizzard, and Riot have integrated the NVIDIA Reflex Low Latency mode  into their titles, giving gamers a responsive experience without  dips in resolution or framerate.

The NVIDIA Reflex SDK is a low latency suite of esports technologies designed to measure, analyze and reduce input latency. The SDK has been built to support custom engines as well as popular game engines such as UE4 and Unity.

Get Started with NVIDIA Reflex >