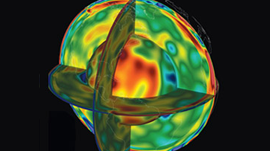 Share Your Science: Mapping the Earth’s Interior with GPUs

Jeroen Tromp, Professor at Princeton University shares how his team is using the Tesla GPU-accelerated Titan Supercomputer at Oak Ridge National Laboratory to image the earth’s interior on a global scale. Tromp and his team are simulating seismic wave propagation by analyzing hundreds of earthquakes recorded by thousands of stations across the world to create 3D global tomographic maps. These maps can be used to find hydrocarbons and for quantitative seismic hazard assessment to asses seismic risk.

Share your GPU-accelerated science with us: http://nvda.ly/Vpjxr
Watch more scientists and researchers share how GPUs are accelerating their work at http://nvda.ly/UOan1