Porsches, Storm Troopers, and Ray Tracing: How NVIDIA and Epic are Redefining Graphics 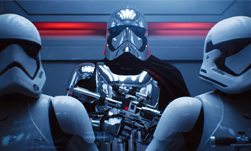 Throughout 2018, NVIDIA and Epic Games have led the charge in showing what development teams can pull off with real-time ray tracing. During GDC, they worked together to create a short demo entitled “Reflections”


Amazing, isn’t it? We’ve reached a stage where real-time ray tracing techniques can be used to construct a sequence that looks so real, it could have been pulled out of a live action movie.
On the first day of SIGGRAPH 2018, NVIDIA and Epic Games showed off another eye-popping clip: “The Speed of Light”.

If you saw this as a Porsche ad on TV, would you even realize the car and environments were digital?
Since the release of “Toy Story” in 1995, gamers have pined for a day when video games would look like CG movies. NVIDIA and Epic Games are proving the time has finally come.
We had the chance to ask Ignacio Lamas, Senior Manager of Real-Time Ray Tracing Software at NVIDIA, Juan Cañada, Ray Tracing Lead at Epic Games, and Francois Antoine, Director of Embedded systems at Epic Games some questions about the work they’ve done on ray tracing:
Question 1: If “Speed of Light” had been made through traditional techniques like light baking or lightmaps, how would the end result differ? How would the development time change?
Answer [Ignacio Llamas, NVIDIA]: The entire demo is about fully dynamic studio lighting with multiple area lights. Using lightmaps would not be an option for this kind of setup. When everything is dynamic, traditional rasterization-based techniques are simply insufficient to correctly capture area lights shadows, correct artifact-free reflections and the diffuse light interactions. There was simply no way to do this without real-time ray tracing and the performance of Turing GPUs.
Question 2: “Speed of Light” delivered on the promise of photorealistic results from ray tracing. Can you give us a sense of how long it took to produce that clip? How big was the team that worked on it?
Answer [Ignacio Llamas, NVIDIA]: From a technology standpoint we started from where the “Reflections” demo left off — which means ray traced area lights, reflections and ambient occlusion. We had about three months to push the technology to the next level to meet the higher demand of fully dynamic ray traced lighting in this demo. To accomplish this we had about eight rendering engineers across NVIDIA and Epic involved to various degrees.
Answer [Francois Antoine, Epic Games]: The “Speed of Light” demo is actually made of two components — the cinematic ‘attract mode’ and the interactive lighting studio, and they both use the exact same vehicle asset. If I were to break it down by sub-project, we had two people working on the Speedster asset, three people working on the interactive lighting studio and about five people working on the cinematic. The production of the entire “Speed of Light” project took about eight weeks and  happened in parallel with the development of new ray-traced rendering features.
Question 3: Is “Speed of Light” using cinematic-quality assets, or in-game quality assets?
Answer [Ignacio Llamas, NVIDIA]: The original CAD model is as detailed as you can get. The in-engine version, tessellated to either 10 or 40 million polygons is in the range that we can consider cinematic quality. In addition to the polygon count, the other thing that makes the model cinematic quality is the physically-based materials, which have an amazing amount of detail and closely match reference samples and car photography.
Answer [ Francois Antoine, Epic Games]: The Porsche Speedster asset used in the “Speed of Light” was directly tessellated in Unreal Engine’s DataSmith using Porsche’s actual CATIA CAD manufacturing files. The first iteration of the Speedster was 40 million polygons, which we then selectively re-tessellated down to just shy of 10 million polygons. Ignacio had surprised us by saying that this optimization would not significantly impact the performance when rendering using RTX and that proved to be the case. The project performance was very similar with either version of the car! This is a real plus for the visualization of large enterprise datasets.

Question 4: The materials in the demo were highly varied, with a strong focus on reflective and translucent surfaces… how did you build those materials for the demo?
Answer [ Francois Antoine, Epic Games]: Indeed, when we first got wind of Turing’s ray-tracing feature set, we immediately thought of an automotive-focused project. Cars are all about smooth, curvy reflections — what we call “liquid lines” in industry speak — and we couldn’t think of any other subject that could benefit more from Turing’s ray-tracing. In order to get these reflective and translucent materials to look as accurate as possible, we emphasize the use of high quality real-world reference, in some cases going as far as ordering car parts and disassembling them to better understand their internal structures and how they interact with light. This is exactly what we did with the Speedster’s tail lights — this new found understanding coupled with the more physically accurate behavior of ray-tracing allowed us to achieve much more realistic taillights than we previously could.
Question 5: Is the entire demo ray-traced, or have some rasterization techniques been used?
Answer [Juan Canada, Epic Games]: The demo uses hybrid techniques where a raster base pass is calculated first. On top of that, ray traced passes are launched to calculate complex effects that would be very hard to achieve with traditional raster techniques.
Question 6: There’s so much to take in watching the “Speed of Light” clip. Are there any little details in the sequence that people might be prone to miss? Which moments show off ray tracing most effectively?
Answer [Francois Antoine, Epic Games]: There is a lot more innovative tech there than you will notice — and that is a good thing! The tech shouldn’t attract your attention, it should just make the image look more plausible. For example, the light streak reflecting in the car are not coming from a simple texture on a plane (as would traditionally be done in rendering), but is instead an animated textured area lights with ray-traced soft shadows. This mimics how these light streaks would be created in a real photo studio environment, with light affecting both the diffuse and specular components of the car’s materials and creating a much more realistic light behavior. Oh, and it’s amazing to finally have proper reflections on translucency, thanks to ray-tracing!

Question 7: Can you give us some detail about the creative process behind “Speed of Light”? How did the project evolve from initial pitch to final product?
Answer [ Francois Antoine, Epic Games]: Sure. The creative idea happened during an early debriefing call with EPIC CTO Kim Libreri. We got to talking about a way to visually manifest the essence of the Porsche 911 along with the massive advancement in lighting fidelity that RTX and Turing would bring to the real-time industry — and the theme of “Speed” and “Light” was born! The initial idea was developed into a real-time cinematic and interactive piece which would transition seamlessly to drive the point across that they used the same high quality ray-tracing, the same area lights, the same car asset and the same polycount. Both the cinematic and the lighting studio are being rendered in real-time with a level of fidelity that I think is fabulous, especially for first generation hardware! 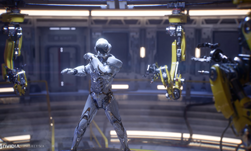