Today NVIDIA announced the availability of NVIDIA Modulus (previously known as SimNet), a platform to train neural networks using governing physics equations along with observed or simulated data. The robust and high-fidelity models produced by the Modulus framework enable the acceleration of design exploration for multiphysics systems–ideal for digital twin development.

NVIDIA Modulus is designed for engineers, scientists, researchers, and students. It is easy to adopt while providing scalable performance, broad applicability, and fast turn-around time, as you train once and infer multiple times to address several what-if scenarios.

Modulus leverages an AI-based approach to blend the benefits of physics and ML. Taking training data and the governing physics equations into account, Modulus trains a neural network that encapsulates the physics of the system into a high-fidelity model that can be used in various applications. ​

The data preparation module in Modulus takes in observed or simulated data as input, along with the geometry in several standard formats including point cloud format, of the system we are trying to model. The beauty of Modulus is not just taking a specific geometry of the system, but also an explicit parameterized space of the input geometry. This allows the trained model to explore and optimize the design space for the optimal parameters.

The training engine module takes all the inputs and leverages PyTorch and TensorFlow for training the resulting model, cuDNN for GPU acceleration, and Magnum IO for multi-GPU/multi-node scaling.

Learn more about Modulus and download the software for free.

View a variety of new NVIDIA GTC sessions available on Modulus (previously known as SimNet) and other similar topics: 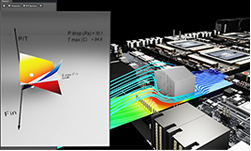