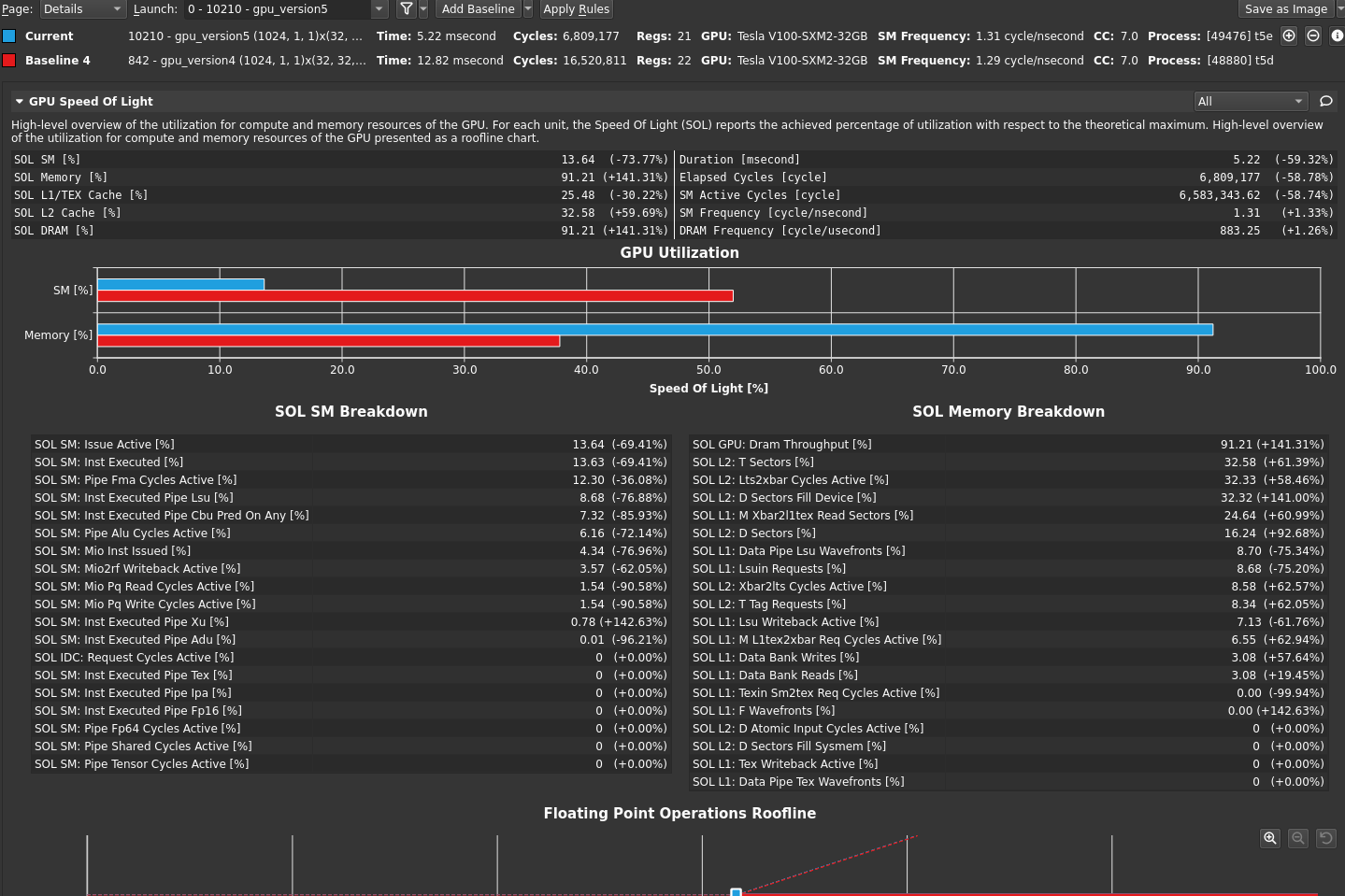 In part 1, I introduced the code for profiling, covered the basic ideas of analysis-driven optimization (ADO), and got you started with the NVIDIA Nsight Compute profiler. In part 2, you began the iterative optimization process. In this post, you finish the analysis and optimization process, determine whether you have reached a reasonable stopping point, and I draw some final conclusions.

Converting the reduction to warp-shuffle

The result of the analysis from part 2 is that your focus has been placed on the following line of code, with the idea of reducing shared memory pressure:

What can you do? In the code refactoring of the previous step, you converted to a warp-stride loop, to permit coalesced access. That resulted in the averaging sum operation spreading across all 32 members of the warp. Thus, you had to combine these, before computing the average. You used a warp-shuffle reduction there, for convenience and simplicity.

The refactored kernel looks like the following code example:

You have replaced your shared-memory sweep reduction with a two-stage warp-shuffle reduction. No changes are needed at the kernel launch point, other than to change the name of the kernel to your new gpu_version4. If you compile and run this code, you see an additional speedup:

Return to the profiler. Repeat the disconnect, connect, launch, run sequence and then reset the baseline. Figure 1 shows the results.

The bottleneck rule has pointed you back to latency again, with the same message as in the previous post, because this latest change relieved pressure on most of the various GPU subsystems. The latency that the profiler is now pointing out is just the memory latency inherent in your loading of ~4 GB of data for this processing. You can get a sense of this by looking at the Warp State Statistics section, where you now see Stall Long Scoreboard as your most significant stall reason (Figure 2).

[Warning] On average each warp of this kernel spends 15.4 cycles being stalled waiting for a scoreboard dependency on a L1TEX (local, global, surface, texture) operation. This represents about 46.1% of the total average of 33.3 cycles between issuing two instructions. To reduce the number of cycles waiting on L1TEX data accesses verify the memory access patterns are optimal for the target architecture, attempt to increase cache hit rates by increasing data locality or by changing the cache configuration, and consider moving frequently used data to shared memory.

You already know you don’t have local, surface, or (explicit) tex operations, so global memory is again the focus. You can again get an additional sense of this by looking at the source view (Figure 3).

The following line of code is dominating the sampling data, as well as being the biggest contributor to your warp stall reasons:

Hover the mouse over the brown bars to get the warp stall reasons. It is easy to see in Figure 3, but what if it were less obvious or you had more code to sort through? The profiler can help you here. On the Details page, the Warp State Statistics section listed the highest stall reason as Stall Long Scoreboard. How can you find the line with the highest contributor to that? First, for Navigation, select stall_long_sb. Then, choose the button to the right with an up-arrow and a line. This asks the profiler to show the line with the highest reported value for that metric (Figure 4). The profiler highlighted the expected line for you.

You have optimized this step as much as possible. How can you be sure of that? At this point, to achieve your next (and final) round of optimization and to answer this important question, you must revisit your code and consider more major refactoring.

At a high level, your code is producing a set of intermediate vectors that are the results of the averaging phase and then multiplying each of those vectors by an unchanging matrix to get a set of result vectors. This second phase of operations, the matrix-vector multiply step, could be refactored to be a matrix-matrix multiply because the input matrix is constant across each matrix-vector multiply step.

You could rewrite or decompose your kernel into two separate kernels. The first kernel performs the vector averaging, writing out the set of average vectors as a matrix. The second kernel performs the matrix-matrix multiply. Rather than writing your own kernel for this second phase refactored, use cuBLAS, a highly optimized library. This refactoring also means that you must store the intermediate vector results in global memory to facilitate passing them to the cuBLAS gemm (matrix-matrix multiply) operation, along with the input matrix. This store to global was not necessary in your previous realizations, because you could just carry the vector forward in local thread storage, for use in the matrix-vector multiply.

This refactoring also isolates the vector averaging step, which allows you to get an independent measurement of whether this step is truly optimal. The first phase vector averaging, now isolated in its own kernel, is dominated by the global load operations of 4 GB of data, focused on the line of code the profiler has already indicated in this step.

As indicated in the previous section, your task now is to refactor your code by breaking the kernel into two pieces, the first of which is your existing phase 1 kernel code but writing out the intermediate vector into a matrix of results, in global memory. The second piece is a properly crafted cuBLAS SGEMM call, to perform the matrix-matrix multiply operation. Getting this right involves accounting for the transpositions needed on the input data and when comparing the results for accuracy. The final refactored code looks like the following code example:

If you compile and run this code, you get results like the following example:

You have again improved the performance of your code and your GPU implementation is now almost 100x faster than your CPU OpenMP version. To be fair, this final optimization to convert the sequence of matrix-vector multiply operations into a single matrix-matrix multiply could equivalently be done on the CPU version. Using a high-quality CPU BLAS library would also probably give a better result there.

What about the question asked earlier, “Is your global load operation optimal?” Because the first kernel is now dominated by the global loading of 4 GB of data, you can estimate the achieved bandwidth and compare it to a proxy measurement of the achievable memory bandwidth on your GPU. If the two numbers are close to each other, you can conclude that the global loading operation is nearly optimal and could not get any better. For the proxy measurement of achievable memory bandwidth on your GPU, use the CUDA sample code bandwidthTest. When run on this V100 GPU, the output looks like the following code example:

The last number is the one you are interested in. A V100 has about 740 GB/s of available memory bandwidth, according to this measurement. The GB used here is 1 billion bytes, not 2^30 bytes. To get a comparison for your kernel, you must get a timing duration for just the kernel, not the kernel plus cuBLAS call.

Of course, you could modify the timing in your code to print this out but look at the profiler one last time. There are now two kernels in your code: one that you wrote, and one that is launched by the cuBLAS call. Not all cuBLAS calls result in one single kernel call, but this usage does. Now when you disconnect, connect, launch, and choose Run to next kernel, you profile just your version 5 kernel. The profiler reports the execution duration as 5.22 milliseconds (Figure 5).

This is most of the overall execution time that you measured of ~5.5 milliseconds!  The 4 GB of data that you have is 4x1024x1024x1024 bytes. If you divide that by 5.22 milliseconds, you get an achieved bandwidth of approximately 823 GB/s, using the GB that is used by bandwidthTest. So, your averaging kernel is performing even better than bandwidthTest and is approximately optimal. The profiler output also indicates greater than 90% memory utilization, agreeing with your measurement. Choose Run to next kernel one more time, because you still have the cuBLAS SGEMM kernel waiting in the wings. Figure 6 shows the results in the GPU Speed of Light section after the baseline is cleared.

As you suspected, this kernel (volta_sgemm_32x128_tt) is short, around 220 microseconds, making up most of the difference between your 5.2 millisecond global load kernel time and the overall measured duration of ~5.5 milliseconds. The profiler also reports this highly optimized library kernel is running the GPU at a high level of both compute utilization and memory utilization. You have some solid data now that says your code is roughly optimal, and now you should spend your precious time elsewhere.

The Nsight Compute profiler provides a large amount of information. In this post, I’ve only scratched the surface of the data presented and the tool’s capabilities. No post like this could hope to give a complete treatment. The amount of information here may require some effort to process. The following are some observations and suggestions to help you:

The analysis work in this post was performed on a machine with the following characteristics: Ubuntu 18.04.3, CUDA 11.1, GPU Driver version 455.23.05, GCC version 7.5.0, V100-SXM2-32 GB GPU, Intel® Xeon® Gold 6130 CPU @ 2.10GHz. The code examples presented in this post are for instructional purposes only. They are not guaranteed to be defect-free or suitable for any particular purpose.

About Bob Crovella
Bob Crovella is on the Solution Architecture team at NVIDIA, and earned a BS in Electrical and Electronics Engineering from University of Buffalo and a Master’s of Electrical Engineering from Rensselaer Polytechnic Institute. He leads a team focused on working with our OEM partners to make GPU computing a success for our customers, and also enjoys helping developers directly with CUDA.
View all posts by Bob Crovella