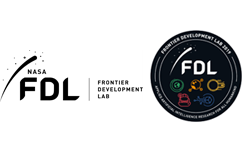 With the world focused on the 50th Anniversary of Man’s first footsteps on the Moon, the periphery is filled with preparation and innovation for the launch of an entirely “New Space” industry, which will land the planet’s first Woman onto the Moon’s surface by 2024. Named after Apollo’s twin sister, the Greek Goddess of the Moon, the Artemis program has already contracted various entities to ensure the success of this epic next Chapter. Follow the Apollo 11 rerun here.

Solving problems for space exploration “and all Humankind” is the mission of the Frontier Development Laboratory, established in 2015 by NASA, the SETI Institute, NVIDIA & Autodesk.

This year also introduces a new challenge addressing astronaut health. With the current solar minimum comes increased risk of cosmic radiation exposure to astronauts so its vital to monitor them closely, while also being able to predict so-called scintillations.

By synthesizing cardiac data, using conditional generative adversarial neural networks (CGANs), the team can enable and empower tools for diagnostics and prevention. One of the limitations is the lack of data. Since the goal is to generate both symptomatic and asymptomatic ECG data for astronauts, validation of the model, without wearable symptomatic data is challenging.

FDL (2018) Fellow, Ana Mosquera, just completed the 45-day analog (Earth-based, simulated) HERA mission with NASA. She was wearing Astroskin which collected her biosensor data (and that of her colleagues) which will be used in the challenge. The team is enabled by IBM, who is providing Power8 and 9 compute nodes in the IBM Accelerated Computing Cloud. The Power9 system features NVIDIA V100 GPUs. Team mentors include IBM Watson Health CTO, Ted Tanner, Frank Soboczenski, a computer scientist at King’s College London and former NASA FDL researcher, Brian Russell, the director of the Nelson AI Institute, New Zealand, NVIDIA’s Solution Architect, Ronay Ak and Annie Martin of the Canadian Space Agency. IBM is also providing compute for the Space Weather teams, alongside Google Cloud, who are offering virtual machines linked to NVIDIA’s publicly available, optimized and containerized software, via NGC.

It is moving for IBM to be involved since their early mainframe was featured back in the early 1960s, with the contributions of Katherine Johnson, Mary Jackson, and Dorothy Vaughan, three of the original, human “computers” of the Apollo era. The movie, Hidden Figures, portrays this wonderfully, highlighting the role of women in Space and STEM, as well as the switch to what we now know as computers today. FDL has consistently achieved a minimum of 30% female participation, double that of today’s artificial intelligence field.

The European team working on flood monitoring is evaluating Jetson Nano, alongside Intel Movidius, who are deploying with ESA later this year. NVIDIA Jetson TX2 has been operating nominally onboard the International Space Station for over six months now, with Orbital Sidekick, providing hyperspectral imaging. The testing of low SWaP (size, weight, and power) embedded computing in Space is essential for the next phase of autonomous spacecraft (including CubeSats, satellites, telescopes) and for the robotic builders, of our habitats on the Moon, and beyond!

We welcome Airbus, Telespazio & Boeing to FDL, as well as the fascinating Goonhilly Earth Station, based in Cornwall. Goonhilly is home to a new deep space network and is setting up a large data center, a facility now open for partners and clients to utilize.

Processing & analyzing massive amounts of streaming data requires GPU-acceleration so the Goonhily data center incorporates NVIDIA DGX, delivered in partnership with Scan Computing and liquid-cooled GPU power via Submer. HPE is also involved. In 2017, their Spaceborne project demonstrated that commodity hardware and software can run successfully without radiation-hardening. It also highlighted the need to remember that astronauts aren’t SysAdmins.

Solutions are being provided by agile “New Space” startups, harnessing both AI and NVIDIA’s embedded GPUs, in various form factors, for a multitude of space-based applications. Known as Earth Observation, the coupling of satellite data with AI, has huge interest from all types of users, a topic being addressed during Phi Week at ESA/ESRIN in September.

Having been a part of FDL since its inception in 2015, I would like to extend my sincerest gratitude to all our partners and stakeholders, especially NASA Ames, the SETI Institute, ESA (ESRIN) & the University of Oxford, our incredible hosts. Best Wishes to all team members as they pass the half-way point of FDL 2019.

Congratulations to NASA on the 50th Anniversary of the Apollo 11 mission. 50 years ago today, at 16:35 pm UTC, the crew re-entered Earth’s atmosphere, splashing down 4 minutes later, safely, into the Pacific, 800 miles SW of Hawaii. Here’s to the next 50 years of space exploration!

Alison Lowndes is an Artificial Intelligence DevRel at NVIDIA, and founding team member of the Frontier Development Lab.