In this chapter we present the true impostors method, an efficient technique for adding a large number of simple models to any scene without rendering a large number of polygons. The technique utilizes modern shading hardware to perform ray casting into texture-defined volumes. With this method, multiple depth layers representing non-height-field surface data are associated with quads.

Like traditional impostors, the true impostors approach rotates the quad around its center so that it always faces the camera. Unlike the traditional impostors technique, which displays a static texture, the true impostors technique uses the pixel shader to ray-cast a view ray through the quad in texture-coordinate space to intersect the 3D model and compute the color at the intersection point. The texture-coordinate space is defined by a frame with the center of the quad as the origin.

True impostors supports self-shadowing on models, reflections, and refractions, and it is an efficient method for finding distances through volumes.

Most interesting environments, both natural as well as synthetic ones, tend to be densely populated with many highly detailed objects. Rendering this kind of environment typically requires a huge set of polygons, as well as a sophisticated scene graph and the overhead to run it.

As an alternative, image-based techniques have been explored to offer practical remedies to these limitations. Among current image-based techniques is impostors, a powerful technique that has been used widely for many years in the graphics community. An impostor is a two-dimensional image texture that is mapped onto a rectangular card or billboard, producing the illusion of highly detailed geometry. Impostors can be created on the fly or precomputed and stored in memory. In both cases, the impostor is accurate only for a specific viewing direction. As the view deviates from this ideal condition, the impostor loses accuracy. The same impostor is reused until its visual error surpasses a given arbitrary threshold and it is replaced with a more accurate impostor.

The true impostors method takes advantage of the latest graphics hardware to achieve an accurate geometric representation that is updated every frame for any arbitrary viewing angle. True impostors builds off previous per-pixel displacement mapping techniques. It also extends the goal of adding visually accurate subsurface features to any arbitrary surface by generating whole 3D objects on a billboard. The true impostors method distinguishes itself from previous per-pixel displacement mapping impostor methods because it does not restrict viewing, yet it provides performance optimizations and true multiple refraction.

A single four-channel texture can hold four height fields, which can represent many volumes. More texture data can be added to extend this to any shape. We generate a billboard (that is, a quad that always faces the camera) for use as a window to view our height fields from any given direction, as illustrated in Figure 21-1. 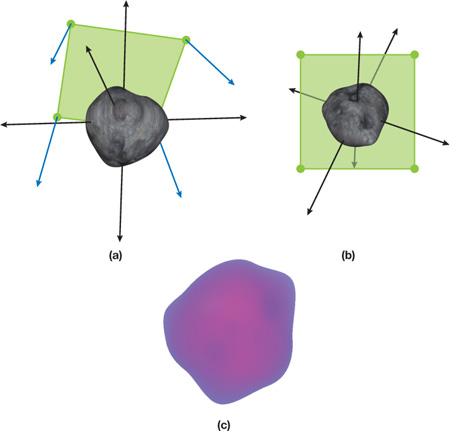 The image in Figure 21-1b shows a representation of our billboard's texture coordinates after they have been transformed into a 3D plane and rotated around our functions (model) in the center (represented by the asteroid). Figure 21-1a shows the perspective of our function that would be displayed on our billboard, and Figure 21-1c shows the function (in bitmap form) that represents our asteroid.

To expand on this concept, see Figure 21-2. In Figure 21-2a, we see the component of this method that operates on geometry in world space. The camera is viewing a quad that is rotated so that its normal is the vector produced between the camera and the center of the quad. As shown, texture coordinates are assigned to each vertex. Figure 21-2b reveals texture space, traditionally a two-dimensional space, where we add a third dimension, W, and shift the UV coordinates by –0.5. In Figure 21-2c, we simply set the W component of our texture coordinates to 1. 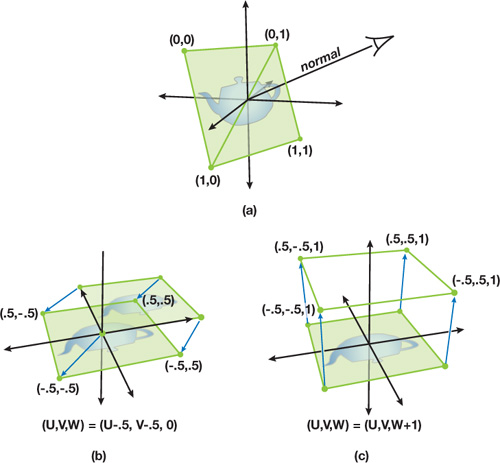 Keep in mind that the texture map only has UV components, so it is bound to two dimensions and therefore can only be translated along the UV plane, where any value of W will reference the same point. Although bound to the UV plane, the texture map can represent volume data by treating each of the four variables that makes up a pixel as points on the W axis. In Figure 21-3, we can see the projection of the texture volume into three-dimensional space. The texture coordinates of each vertex are rotated around the origin—the same way our original quad was rotated around its origin—to produce the billboard. 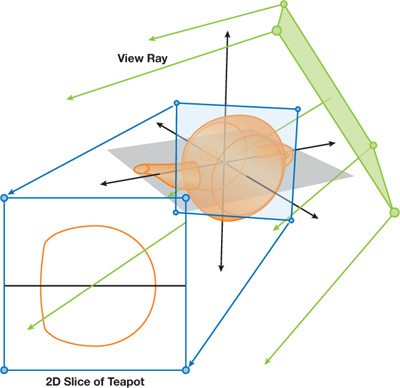 Now we introduce the view ray into our concept. The view ray is produced by casting a ray from the camera to each vertex. During rasterization, both the texture coordinates and the view rays stored in each vertex are interpolated across the fragmented surface of our quad. This is conceptually similar to ray casting or ray tracing because we now have a viewing screen of origin points, where each point has a corresponding vector to define a ray. It should also be noted that each individual ray projects as a straight line onto our texture map plane and therefore takes a 2D slice out of the 3D volume to evaluate for collisions. This is shown in detail in Figure 21-3.

At this point two separate options exist, depending on the desired material type. For opaque objects, ray casting is the fastest and most accurate option available. A streamlined approach to this option is presented in Policarpo and Oliveira 2006, using a ray march followed by a binary search, as shown in Figure 21-4. Figure 21-4a shows a linear search in action. The view ray is tested at regular intervals to see whether it has intersected with a volume. Once the first intersection is found, it and the previous point are used as the beginning and ending points of a binary search space. This space is then repeatedly divided in half until the exact point of intersection into the volume is found.

Because of the nature of GPU design, it is impractical from an efficiency standpoint to exit out of a loop early; therefore, the maximum number of ray marches and texture reads must be performed no matter how early in the search the first collision is found. Rather than ignore this "free" data, we propose a method for adding rendering support for translucent material types through using a localized approximation. Instead of performing a binary search along the viewing ray, we use the points along the W axis to define a linear equation for each height field. We then test these linear equations for intersection with the view ray in a similar fashion as shown in Tatarchuk 2006.

As shown in Figure 21-5, the intersection that falls between the upper and lower bounding points is kept as the final intersection point. Because the material is translucent, the normal is checked for this point. Plus, the view ray is refracted according to a refractive index either held constant for the shader or stored in an extra color channel in one of the texture maps. Once the new view direction is discovered, the ray march continues and the process is repeated for any additional surfaces that are penetrated. By summing the distances traveled through any volume, we determine the total distance traveled through our model and use it to compute the translucency for that pixel. 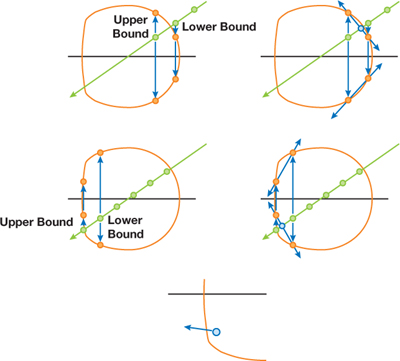 The true impostors method performs similarly to other per-pixel displacement mapping techniques. However, there are concerns that are unique to this method: for example, performance is fill-rate dependent. Plus, billboards can occlude neighbors, so it is crucial to perform depth sorting on the CPU to avoid overdraw.

On the other hand, because the true impostors method is fill-rate dependent, the level of detail is intrinsic, which is a great asset.

With the true impostors method, you can represent more geometry on screen at once than you could using standard polygonal means. Figure 21-6 shows a model of Jupiter rendered using a quarter-of-a-million asteroids to constitute its ring. This technique was implemented in C++ using DirectX 9. All benchmarks were taken using an NVIDIA GeForce 6800 Go GPU and two GeForce 7800 GPUs run in SLI. 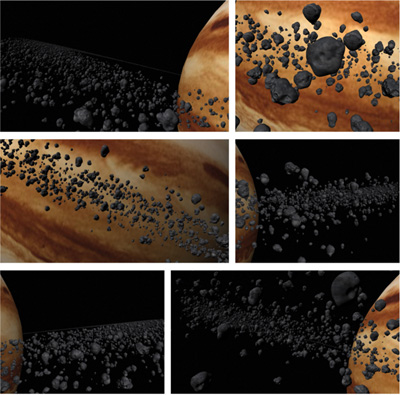 Although the vertex processor is crucial for this method, the resulting operations do not overload the vertex processing unit or noticeably reduce performance. The performance of this technique is primarily determined by the fragment processing unit speed, the number of pixels on the screen, the number of search steps for each pixel, and the choice of rendering technique. When ray casting was done, the performance mirrored that of Policarpo and Oliveira 2006 because of the similar ray casting technique used in both methods. Table 21-1 reports the performance of this technique as "ray casting."

Table 21-1. Performance Comparison of Both Methods

True impostors is a quick, efficient method for rendering large numbers of animated, opaque, reflective, or refractive objects on the GPU. It generates impostors with little rendering error and offers an inherent per-pixel level of detail. By representing volume data as multiple height fields stored in traditional texture maps, the vector processing nature of modern GPUs is exploited and a high frame rate is achieved, but with a low memory requirement.

By abandoning the restrictions that inherently keep per-pixel displacement mapping a subsurface detail technique, we achieved a new method for rendering staggering amounts of faux geometry. We accomplished this not by blurring the line between rasterization and ray tracing, but by using a hybrid approach that takes advantage of the best each has to offer.