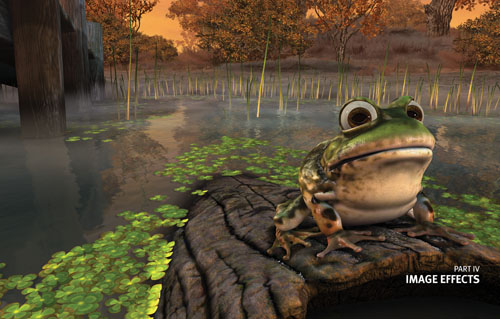 In preparing this section of GPU Gems 3, I revisited the matching sections of the previous volumes. It's exciting to see that the ideas presented in our first two books have already become de rigeur throughout the game and entertainment industries. Standards like HDR and OpenEXR (GPU Gems) and techniques like high-quality GPU color transformations (GPU Gems 2) are already widely accepted and in use everywhere. Some of the informative chapters ahead, from my vantage point, look to be equally influential over the coming years. As of 2007, with more emphasis than ever on high-quality 2D and 3D imaging—not just in games but even on the basic desktop views of the newest operating systems—this is especially promising.

Alongside the rapid growth in GPU power over the past few years, we've seen surprising quality improvements and a drop in prices for large displays. Some gamers and other high-end computer users are already using resolutions as high as 2560x1600—on a single monitor—on a daily basis. Many are spreading their screen real estate even further by attaching additional monitors. Truly pocketable still cameras of 10 megapixels or higher are already common in discount stores, and consumer HD video can be seen at every neighborhood-league soccer game. The demand for great-looking ways to fill these newly available pixels—more than a 5x increase over the 1024x768 screens that are still expected by many games—helps drive new improvements and ideas in imaging.

Traditional TV and movie makers have been industrious in picking up on these new technologies, offering comprehensive broadcast content at HD sizes and seizing on the capabilities of interactive imaging to push the boundaries of their craft. Interactive computer imaging is forging ahead, not just in the new generations of special effects, but as a core part of the entire film and video production pipeline, providing greater interaction, higher productivity, and better, more sophisticated pictures. Even scientific visualizations and the interactive graphics of the evening TV weather report have surged ahead both in gloss and resolution, offering not just prettier numbers but more informative ones. This flood of new imagery is seen daily by every consumer, and in turn it drives their expectations ever higher.

For game makers, the new changes in resolution provide challenges in design. How can they make games (especially multiplayer games) that are approachable by players using not only the newest, high-performance computers but also older, low-capability computers—giving all players great experiences while still respecting the advancing trends in consumer choices and engaging the leading edge of what the new hardware permits? What strategies can game designers take so that their games look terrific today and also in the future?

Image effects provide a great way to layer new and increasingly sophisticated looks onto existing graphics frameworks. They can create images using vector-style graphics that will scale beautifully to any resolution, use 2D/3D-hybrid particle systems for environmental richness, and apply effects that can be tuned in complexity according to the capabilities of the player's computer and the demands of their display device. At a minimum, they can ensure that the experience of color is nuanced and true to the art department's vision.

Image effects, more than any other specialty, deal directly with human visual perception—whether the images are real-world pictures and videos, or completely synthetic inventions. The chapters in this part of the book address the elements of perception: issues of color, of perceived detail, and of the use of visual tools like motion blur and depth of field to enrich and direct the user's gaze and their game-playing experience.

These ideas are not theoretical—the chapters here all come from ideas being incorporated into real software for today's PCs, and tomorrow's.