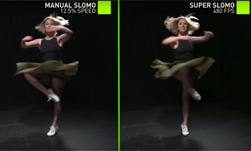 Researchers from NVIDIA developed a deep learning-based system that can produce high-quality slow-motion videos from a 30-frame-per-second video, outperforming various state-of-the-art methods that aim to do the same.  The researchers will present their work at the annual Computer Vision and Pattern Recognition (CVPR) conference in Salt Lake City, Utah this week.
“There are many memorable moments in your life that you might want to record with a camera in slow-motion because they are hard to see clearly with your eyes: the first time a baby walks, a difficult skateboard trick, a dog catching a ball,” the researchers wrote in the research paper.  “While it is possible to take 240-frame-per-second videos with a cell phone, recording everything at high frame rates is impractical, as it requires large memories and is power-intensive for mobile devices,” the team explained.
With this new research, users can slow down their recordings after taking them.
Using NVIDIA Tesla V100 GPUs and cuDNN-accelerated PyTorch deep learning framework the team trained their system on over 11,000 videos of everyday and sports activities shot at 240 frames-per-second. Once trained, the convolutional neural network predicted the extra frames.
The team used a separate dataset to validate the accuracy of their system.
The result can make videos shot at a lower frame rate look more fluid and less blurry.
“Our method can generate multiple intermediate frames that are spatially and temporally coherent,” the researchers said. “Our multi-frame approach consistently outperforms state-of-the-art single frame methods.”

To help demonstrate the research, the team took a series of clips from The Slow Mo Guys, a popular slow-motion based science and technology entertainment YouTube series created by Gavin Free, starring himself and his friend Daniel Gruchy, and made their videos even slower.
The method can take everyday videos of life’s most precious moments and slow them down to look like your favorite cinematic slow-motion scenes, adding suspense, emphasis, and anticipation.
The researchers, which include Huaizu Jiang, Deqing Sun, Varun Jampani, Ming-Hsuan Yang, Erik Learned-Miller, and Jan Kautz, will present on Thursday, June 21 from 2:50 – 4:30 PM at CVPR.
Read more >