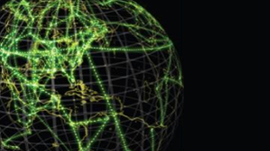 Adam McLaughlin, PhD student at Georgia Tech shares how he is using NVIDIA Tesla GPUs for his research on Betweenness Centrality – a graph analytics algorithm that tracks the most important vertices within a network. This can be applied to a broad range of applications, such as finding the head of a crime ring or determining the best location for a store within a city.
Using a cluster of GPUs for his research, Adam is able to scale his graphs to several million vertices which he says would most likely not be possible without accelerators.

Watch Adam’s talk on “Fast Execution of Simultaneous Breadth-First Searches on Sparse Graphs” from the NVIDIA GPU Technology Theater at SC15: Watch Now
Share your GPU-accelerated science with us at http://nvda.ly/Vpjxr and with the world on #ShareYourScience.
Watch more scientists and researchers share how accelerated computing is benefiting their work at http://nvda.ly/X7WpH