The Virtual Reality (VR) industry is in the midst of a new hardware cycle – higher resolution headsets and better optics being the key focus points for the device manufacturers. Similarly on the software front, there has been a wave of content-rich applications and an emphasis on flawless VR experiences for the end user.

With the introduction of the revolutionary Turing architecture, mainstream GPUs can now deliver the performance required for VR experiences at native resolutions.

There is an opportunity to tap the unused GPU cycles and harness that power to deliver better image quality. Image quality and minimal latency are still the key factors driving the immersive experience for VR users.

MSAA (multi-sample antialiasing) is an antialiasing technique used to mitigate aliasing over the edges of geometries. This is facilitated by the usage of specialized multi-sampled buffers (render target). The available configurations for the buffers are 2x, 4x, 8x (nX – where ‘n’ denotes the no. of samples allocated per-pixel). MSAA takes place in the rasterization stage of the pipeline – the triangle is tested for coverage at each of the ‘n’ sample points, building a 16-bit coverage mask identifying the portion of the pixel covered by the triangle. The pixel shader is then executed once and the values are shared across the samples identified by the coverage mask. This multi-sampled buffer is then resolved into a final frame buffer addressing edge aliasing.

SSAA (Supersampling antialiasing) operates on the above principle as well, however the difference being it executes the pixel shader for all the covered samples. This results in each sample location having its own unique color value accurately computed. On resolving, this results in higher visual quality &  higher performance cost compared to MSAA. MSAA operates along the geometric edges, whereas SSAA operates even inside the geometry.

Though SSAA seems to be advantageous for visual quality, it has its own limitations:

Example of MSAA and SSAA

Figure 2 below shows each pixel as a square and dots indicate sample locations within a pixel.

Before running Pixel Shaders, hardware generates a “coverage mask”. This stores which samples are covered by the current triangle and which are not.

In Pixel1, all 4 samples are covered.

In Pixel2, only 3 samples are covered.

Applications can have an in-game dynamic scaling feature for scaling the rendering resolution. This approach involves scaling the render target by a factor. However such scaling is carried out across the entire frame. Even the unwanted periphery gets scaled & rendered at a higher resolution, which is not really required for VR. A better, but more complex solution would be to scale the central region alone for rendering and downsize it for better quality.

Turing’s VRS has the ability to selectively control the shading rates across the rendering surface. Instead of executing the pixel shader once per pixel, VRS can dynamically change the shading rate during actual pixel shading in one of two ways:

Such VRS capabilities allows us to selectively improve visual quality with supersampling applied just to the foveated central region.

The central region can be supersampled up to 8x – this is based on the MSAA level selected in the application. All this is completely handled from within the NVIDIA display driver without the need of any application integration.

Users can enable VRSS from the NVIDIA Control panel -> ‘Manage 3D Settings’ page -> ‘Program Settings’ tab.  There are a couple of options to choose from while turning ‘On’ VRSS.

This feature is available only for applications which meet below criterion and are profiled by NVIDIA:

VRSS does not require any developer integration, and the entire feature is implemented and handled inside the NVIDIA display driver, provided the application is compatible and profiled by NVIDIA.

The Adaptive mode takes performance limits into considerations – it tries to maximize the supersampling region and at the same time not hinder the VR experience. Here, the size of the central region grows/shrinks in proportion to the GPU headroom available.

This mode will help users to perceive the maximum IQ gains possible for a given title using VRSS. This however might result in frame drops for applications that are performance intensive.

With VRSS, we have provided a simple demonstration of the underlying VRS tech. This feature is available for applications profiled by NVIDIA. Developers could submit their games and applications to NVIDIA for consideration.

The advantage of enlisting an application for VRSS would be as follows:

The criteria for profiling an application for VRSS is as follows:

Enabling MSAA in Unreal and Unity

MSAA is a popular anti-]aliasing technique associated with forward rendering, and it is well-suited to VR. Major game engines like Unreal and Unity have support for forward rendering in VR. If the game is already forward rendered, adding MSAA support is relatively easy.

Content that benefits from supersampling will benefit from VRSS as well. Supersampling not only mitigates aliasing but also brings out details in an image. The degree of quality improvement will vary across content though

Supersampling shines when it encounters the following types of content:

However it does not exhibit much IQ improvement for:

With VRSS, we have provided a simple demonstration of the underlying VRS technology for selective supersampling, and which does not need any application integration.

VRSS (Variable Rate Supersampling) is directly available out of the box without requiring any application integration for DirectX 11 MSAA based applications profiled by NVIDIA. Come onboard and submit your games and applications to NVIDIA for VRSS consideration.

About DeepChand Palswamy
DeepChand Palswamy is a Senior Software Engineer working on the VRWoks Graphics team at NVIDIA. His focus areas include optimizing and exploring the 3D Graphics pipeline for VR games. He holds a Bachelors degree in Computer Science from Mepco Schlenk Engineering College, India.
View all posts by DeepChand Palswamy 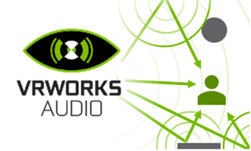