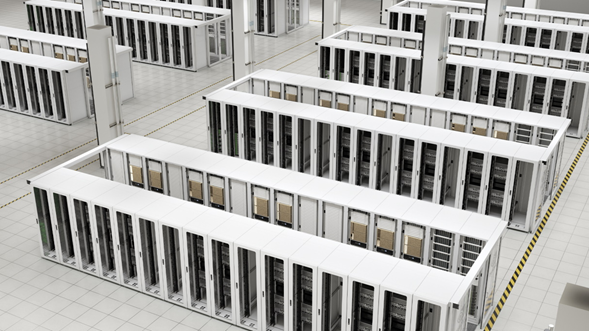 Today, NVIDIA announces the release of cuFFTMp for Early Access (EA). cuFFTMp is a multi-node, multi-process extension to cuFFT that enables scientists and engineers to solve challenging problems on exascale platforms.

FFTs (Fast Fourier Transforms) are widely used in a variety of fields, ranging from molecular dynamics, signal processing, computational fluid dynamics (CFD) to wireless multimedia and machine learning applications. With cuFFTMp, NVIDIA now supports not only multiple GPUs within a single system, but many GPUs across multiple nodes.

Figure 1 shows cuFFTMp reaching over 1.8 PFlop/s, more than 70% of the peak machine bandwidth for a transform of that scale.

In Figure 2, the problem size is kept unchanged but the number of GPUs is increased from 8 to 2048. You can see that cuFFTMp successfully strong-scales the problem, bringing the single-precision time from 78ms with 8 GPUs (1 node) to 4ms with 2048 GPUs (256 nodes).

Figure 1 and 2 were run on the Selene cluster. Selene is made of NVIDIA DGXA100, 8xA100-80GB per node with NVSwitch (300 GB/s/GPU, bidirectional) and Mellanox Infiniband HDR (200 GB/s/node, bidirectional). Tests were ran using CUDA 11.4 and the NVIDIA HPC SDK 21.9 Docker container, available at nvcr.io/nvidia/nvhpc:21.9-runtime-cuda11.4-ubuntu20.04. GPU application clocks were set to the maximum.

cuFFTMp uses NVSHMEM, a new communication library based on the OpenSHMEM standard and designed for NVIDIA GPUs by providing kernel-initiated communications. NVSHMEM creates a global address space that includes the memory of all GPUs in the cluster. Performing communication from inside CUDA kernels enables fine-grained, remote data access that reduces synchronization cost and takes advantage of the massive parallelism in the GPU to hide communication overheads.

By using NVSHMEM, cuFFTMp is independent of the quality of the MPI implementation, which is critical because performance can vary significantly from one MPI to another. For more information, see the Interim Report on Benchmarking FFT Libraries on High Performance Systems. Chapter 3.

Figure 3 shows that cuFFTMp is able to maintain roughly 75% peak as the number of GPUs are doubled.

Let N be the 1D transform size and G the number of GPUs. Every GPU owns N3/G elements (8 or 16 bytes each), and the model assumes that N3/G elements are read/written six times to or from global memory and N3/G2 elements are sent one time from every GPU to every other GPU. On 4096 GPUs, the time spent in non-InfiniBand communications accounts for less than 10% of the total time.

As mentioned earlier, the performances of cuFFTMp do not depend on the MPI implementation. For portability, cuFFTMp requires MPI to be launched and to manage data distributions on the CPUs.

Currently cuFFTMp statically links to NVSHMEM. NVSHMEM uses a small MPI “bootstrap plugin” (nvshmem_bootstrap_mpi.so), which is built using MPI and automatically loaded at runtime. This bootstrap targets the OpenMPI version included in the HPC SDK. For user applications that depend on another MPI implementation, the EA package includes helper scripts to build a bootstrap targeting a different MPI.

cuFFTMp supports both Linux x86_64 and IBM POWER architecture. You can download the EA package for different architectures.  Figure 4 shows that, using 1536 V100 GPUs in 256 nodes, cuFFTMp can reach over 50 TFlop/s transforming 40963 complex data points with only 5% of the Summit system.

cuFFTMp is simply an extension to the current multi-GPU cuFFT library. Most existing multi-GPU functions apply to cuFFTMp. As a distributed, multiprocess library, cuFFTMp requires MPI to be bootstrapped (“launched”) and expects that data is distributed among MPI processes. The following table shows the code required to convert an application from using multi-GPU cuFFT to cuFFTMp.

The cuFFTMp EA package includes C++ and Fortran samples that cover a range of use cases: C2C, R2C/C2R, different plans sharing workspace, and shuffling data from one distribution to the other or redistributing across GPUs. cuFFTMp provides full support for Fortran applications, using the HPC SDK 21.7+ compilers and wrappers included in the EA package.

To understand turbulence flow behavior, a research team at the Tata Institute of Fundamental Research-Hyderabad India (TIFR) developed Fluid3D, a CFD package applying direct numerical simulation (DNS) of the Navier-Stokes equations with pseudo-spectral methods, to fundamentally understand turbulence flow behavior. Porting Fluid3D to use cuFFTMp and CUDA allows for much shorter time per iteration compared to the MPI CPU version, and makes it possible to simulate high Reynolds number flows in a reasonable timeframe.

DNS is a key tool to improve the understanding of turbulence flows, and pseudo-spectral methods are commonly used because of their computational efficiency and accuracy. Turbulent flows consist of vortices of different scales, and energy is transferred from larger scales of motion to the small scales. It is important to simulate and understand the isotropic behavior of the smallest turbulent structures in large DNS runs.

The challenge of turbulence flow simulation is the need to attain high Reynolds (Re) numbers. To maintain the computational stability, the Re number is limited by the grid resolution, that is, Re2.25 < N3, where N is the number of grid points in each dimension. Therefore, simulating high Re number turbulence flows requires numerical resolutions that can be computationally costly or even prohibitive.

Table 1 shows the grid resolutions required for the maximum Re numbers and the memory requirements for the simulations.

Fluid3D uses a second-order exponential Adams-Bashforth time-stepping method in the Fourier space. The simulations are typically integrated over tens of thousands of time steps, computing nine 3D-FFTs per time step. FFTs dominate the overall simulation runtime. The elapsed wall time per time step is an important metric to gauge whether the time to solution for a particular configuration of numerical experiment is reasonable.

Interested in trying out cuFFTMp to transition your application to run on multiple nodes? Head over to the Getting Started page of cuFFTMp EA. After downloading cuFFTMp, play with the sample code and see how similar they are to the multi-GPU version and how they can scale over multiple nodes.

We continue working on improving cuFFTMp, including adding batched APIs, as well as data compression to minimize communications. If you have questions or new feature requests, contact product manager Matthew Nicely.

Special thanks to the Fluid Dynamics Group (Dr. Navdeep Rana, Dr. Vikash Pandey, and Prof. Prasad Perlekar) at TIFR Hyderabad, India, for their trust and granting us access to the multiphase turbulence flow code Fluid3D. They are the very first to adopt cuFFTMp, and have kindly helped us during porting Fluid3D to multi-node and improving the quality of cuFFTMp.

We would also thank the entire NVSHMEM team at NVIDIA for their help supporting the development of cuFFTMp.

About Leopold Cambier
Leopold Cambier received his Ph.D. in computational and mathematical engineering from Stanford University in 2021. During his Ph.D., he focused on fast solvers for very large sparse linear systems, from both a theoretical and parallel-computing perspective. He also interned at NVIDIA on the cuDNN team in 2016 and 2017. Since he joined full-time in January 2021, Leopold has been working on the cuFFT team, on cuFFT and cuFFTMp.
View all posts by Leopold Cambier

About Doris Pan
Doris Pan is a software engineer on the cuFFT team, previously a solutions architect at NVIDIA. Her passion is helping and educating customers around the world to accelerate their HPC and DL/ML applications. Before joining NVIDIA, she worked for years at NOAA, NASA, and Schlumberger as an HPC software engineer and technical manager. Doris holds a Ph.D in environmental science and engineering from the University of North Carolina at Chapel Hill.
View all posts by Doris Pan

About Lukasz Ligowski
Łukasz Ligowski is the engineering manager responsible for the cuFFT and Device Extension libraries. He joined the NVIDIA HPC Math Library team in 2012. Initially, he spent most of the time developing the cuFFT library with a short period of cuDNN/DL work. He transferred to NVIDIA from the University of Warsaw supercomputing centre (ICM). He drove the early adoption of CUDA and used other exotic HW architectures to accelerate scientific applications. He is passionate about extracting the last bits of compute performance from the hardware. In his free time, he likes to enjoy coffee and unicorns.
View all posts by Lukasz Ligowski