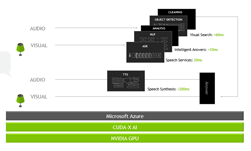 When you ask your phone a question, you don’t just want the right answer. You want the right answer, right now. The answer to this seemingly simple question requires an AI-powered service that involves multiple neural networks that have to perform a variety of predictions and get an answer back to you in under one second so it feels instantaneous. These include:

All of these AI networks independently and therefore alltogether must compute a response within a small latency window. As Microsoft began building this service on its Bing platform using CPU-only servers, they quickly realized these platforms couldn’t perform the computational work within the required latency budget very millisecond counts to deliver a delightful end user experience. The team then switched over to NVIDIA GPUs, and quickly saw massive speedups in the visual search, the question-answer and text-to-speech pipeline stages that reduced the end-to-end latency by 5x to just 500ms.

Speedups along the way included more than double the number of documents scanned with higher accuracy in the question-answer stage of the workflow. And for text-to-speech, Tesla V100 simultaneously delivers 20 real-time speech responses, while CPU-only servers simply couldn’t execute anywhere near the necessary latency budget. GPU acceleration improved Azure’s conversational AI, and give more human-like and clearer intonation of words. As neural speech synthesizers achieve human accuracy, the complexity of networks require serious computation. An average speech response is about 4 seconds and previously it took 5 seconds to generate 1 second of speech (or 20 seconds!). Now Microsoft text-to-speech can generate 1 second of speech in 50 ms with V100, a 100x improvement!

To try this experience yourself you can visit the Bing web site.