How to Get Started with OptiX 7

The evolution of a production-tested high performance ray tracing API

There has been a recent shift in high-performance API design towards providing lower-level control of resource management and execution scheduling. This design evolution allows experienced developers to be in full control of their application while still leveraging the benefits of highly optimized APIs. The lower level of control also provides developers with increased flexibility so that the API usage can better fit the needs of their application. Examples of this shift can be seen in the current DirectX and Vulkan SDKs. With the latest 7.0 release, OptiX joins this evolution, offering direct control of core functionalities once managed internally by the OptiX runtime, including host and device-side memory allocations, multi-GPU work distribution, and asynchronous scheduling.

There are multiple choices in ray tracing SDKs which leverage the NVIDIA RTX technology stack and special purpose ray tracing RTCore hardware; Microsoft’s DXR API provides ray-tracing functionality in a Direct X environment, the VK_NV_ray_tracing extension adds similar support to the Vulkan API, and NVIDIA’s OptiX SDK brings ray tracing to the CUDA world. The first two of these APIs are focused on tight integration into real-time applications and therefore are constrained in their feature sets. OptiX, on the other hand, targets production-quality rendering, offering built-in support for advanced features such as motion-blur and multi-level transform hierarchies.

The OptiX API has been used in a wide variety of applications for years. It is battle-tested and has been a key tool in bringing GPU ray tracing to the world. Since the release of NVIDIA’s RTCore hardware, there has been an increasing desire to apply GPU-acceleration to larger and more complicated ray tracing workloads, such as final-frame rendering for feature films and interactive preview of very large datasets. To this end, we have redesigned the OptiX API to give more flexibility in implementing such applications. This new API is lower level, similar to the level of abstraction of DXR or Vulkan ray tracing, but retains many of the key concepts that have always existed in OptiX.

At SIGGRAPH 2019 NVIDIA released two new versions of the OptiX API: OptiX 7.0, which contains the new low-level API; and OptiX 6.5, which is an update to the classic API. The table below provides a comparison of these four ray-tracing packages.

Comparison of feature-sets for RTX-ready APIs. Features marked as implicit are managed automatically by the underlying runtime and are not exposed for explicit control by client applications.

The NVIDIA OptiX 7 API is a CUDA-centric API that is easily invoked by a CUDA-based application. The API is designed to be stateless, multi-threaded, asynchronous, supports a lightweight representation for scenes, and is fully thread-safe.

Like the classic OptiX API, device code is organized into several types of programs, which are composed, along with OptiX’s internal scheduling algorithms and BVH traversal programs, into a full ray-tracing kernel. 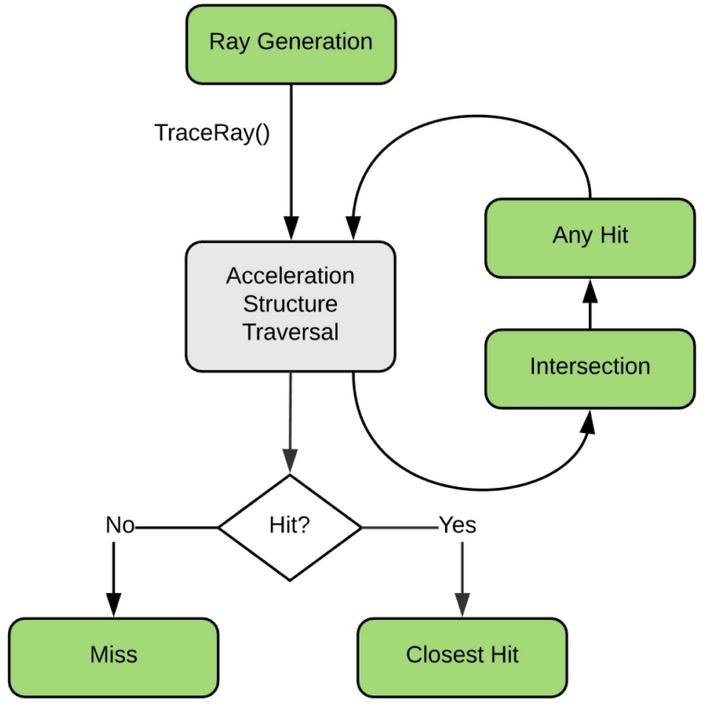 We demonstrate the device-side OptiX API via a simple sample program which renders a single triangle with trivial shading. The full source for this program can be found in the OptiX 7 SDK in the optixTriangle example application.

The ray-generation program is the entry point to execution on the device when optixLaunch is called on the host. In our example, the ray-generation function maps its index in the launch grid to a pixel in the virtual screen, traces a ray from the camera through the pixel, and records the results in an output raster.

This is quite similar to classic OptiX with a few important differences:

When optixTrace is called, the specified ray traverses the acceleration data structure provided. On NVIDIA RTX GPUs, this can be executed on special purpose hardware to allow exceptionally efficient traversal of the acceleration structure.

While any surface can be represented with triangles, there are some tradeoffs that do cause custom primitives to be useful in some situations. For example:

Custom intersection programs are also used in previous versions of OptiX, but a few things are new in OptiX 7:

After ray-traversal is completed, if an intersection was found, the closest-hit program is invoked. This program typically calculates derived geometric quantities resulting from intersection, performs material shading, and passes the results back to the ray-generation program. In some applications, shading is deferred to the ray-generation program itself.

In the example closest-hit program, we simply visualize the triangle’s barycentric coordinates.

Following ray-traversal, if an intersection was not found the miss program is executed. The miss program is often used to provide a background or environment shader. This example’s miss program is trivial, but it does demonstrate one very important concept in the new OptiX API – the shader binding table (SBT).

The shader binding table provides a data block per instance of an optix program and is used here to pass in a background color for use by the miss program. The optixGetSbtDataPointer call returns a pointer to the first byte of the data block assigned to this particular program and ray type.

There are three additional types of OptiX programs not demonstrated in this example:

The OptiX host API has been simplified, allowing many operations which were managed by the OptiX library to be under the full control of the client application. Examples of these explicitly controlled operations include memory management, host-side multi-threading, multi-GPU work distribution, and CUDA stream management. OptiX objects are now light weight handles with little or no underlying state.

Now let’s take a look at how the host-side API is used to set up the above device code for optixSimpleTriangle.

An OptiX 7 device context is bound to a single GPU and associated with a single CUDA context. Applications wishing to leverage multiple GPUs in a system may create multiple device contexts and use them to invoke independent launches per device. Below is code to create an OptixDeviceContext bound to the primary CUDA context.

For the sake of brevity, we omit any error code checking on CUDA and OptiX API calls. The full optixSimpleTriangle sample source uses error checking macros on all API functions. Also note the idiomatic zero-initialization of the input struct OptixDeviceContextOptions. A good practice is to zero-initialize all OptiX input structs to mark all fields as default, then to selectively override the fields to be used.

The creation of Acceleration structures has undergone significant changes in the new OptiX API:

For our sample application, we will build a geometry acceleration structure (GAS) for a single triangle. The output of the build phase is a traversable handle, which can be passed to device code and then used as the target for an optixLaunch call.

In most cases, we would now want to perform an additional compaction step using optixAccelCompact. This operation allows resizing of the buffers from the conservative estimate given by optixAccelComputeMemoryUsage to the actual size used for the final acceleration structure build.

Now that we have created our geometry, we need to specify the OptiX programs we want to use to render it. The CUDA code for our programs first needs to be converted to NVIDIA’s intermediate code representation, PTX, usually via the CUDA nvcc compiler. The programs in PTX form are then compiled into OptixModules. One or more modules are used to create an OptixProgramGroup. Those program groups are then linked into an OptixPipeline, enabling them to work together on the GPU. This is similar to the compile-and-link process commonly found in standard compiler toolchains.

Here is our code for creating an OptixModule from a single source:

Once we have one or more modules, we can create program groups to associate OptiX programs with their input parameters. This association is created in a shader binding table (SBT) record. The SBT is a device memory array of these records, with each record consisting of two parts: a header and a data block. The header is opaque to the client application and contains the information necessary for OptiX to identify programs during traversal, such as which ray-generation program is used by a given pipeline. The data block is opaque to OptiX and is used by the client application to specify program parameters, such as material properties for a closest-hit program.

There are several types of program groups, but for our example we will only be using a ray-generation group, a miss group, and a hit group. Hit groups are unique in that they may contain multiple programs associated with evaluating geometry hits; an intersection program, a closest-hit program, and an any-hit program. A hit group is roughly analogous to a GeometryInstance in the original OptiX interface. In our simple example, we require only a closest-hit program since we are using built-in triangle functionality and simple shading.

Finally, we can link our program groups into an OptiX pipeline. A pipeline corresponds to a an entry point in the classic OptiX API. You can compose multiple pipelines sharing program groups if multiple different render passes are desired.

We now have the program groups needed to populate the record headers in our SBT. The SBT mechanism is very flexible, allowing for many different setups depending on the needs of a given application. For example, an application may specify different programs and data to be used for differing ray types (eg, shadow rays, camera rays, or ambient occlusion rays) or might specify different hit-groups per-triangle in a mesh. Our example is very simple with a single record per program, with only the miss program utilizing the data block of its SBT record.

Refer to the miss program code listing above for demonstration of accessing the data block of an SBT record within an OptiX device program. Also note the SBT stride, offset, and miss index parameters to the optixTrace call in <<<Code listing: ray-gen program>>>. These determine how OptiX looks up SBT records during traversal. The SBT stride and SBT offset are used to implement multiple ray types where a different set of programs are used for each type. The stride indicates the total number of ray types in use (eg, many rendering applications use a radiance and shadow ray type and would set this to two). The offset parameter selects the ray-type program and is in the range [0, SBT stride – 1]. Finally, the miss index parameter selects the miss program to be used when multiple miss programs are specified in the SBT.

Now that we have the components of our pipeline, launching is straightforward. We set per-launch params, call optixLaunch, and then process the results as appropriate.

How to get started

Download the OptiX 7.0 SDK from the OptiX SDK Developer page. This SDK includes the OptiX development headers and many samples, including the optixTriangle app discussed here. For a complete reference to the OptiX API, see the OptiX API Reference and the OptiX Programming Guide, packaged as part of the SDK or online.

If you questions or feedback, please post on the OptiX developer forum or email us at: OptiX-Help@NVIDIA.com

About Keith Morley
Keith is currently a development technology engineer, responsible for helping key partners design and implement ray-tracing based solutions on NVIDIA GPUs. Keith joined NVIDIA after graduating from Princeton. In his ten years at the company, Keith focused on various ray-tracing efforts both as a research engineer and one of the original developers of the Optix API.
View all posts by Keith Morley