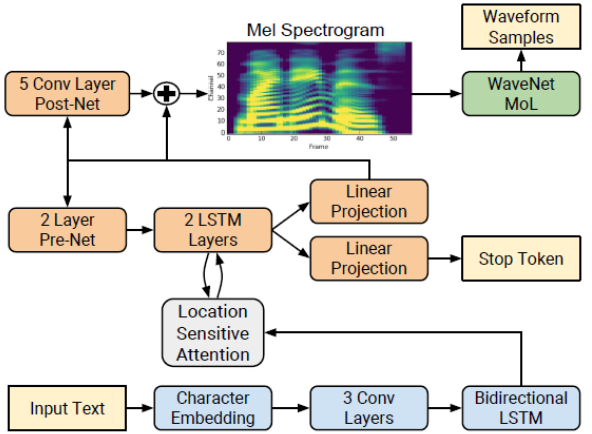 This post, intended for developers with professional level understanding of deep learning, will help you produce a production-ready, AI, text-to-speech model.

The optimized Tacotron2 model2 and the new WaveGlow model1 take advantage of Tensor Cores on NVIDIA Volta and Turing GPUs to convert text into high quality natural sounding speech in real-time. The generated audio has a clear human-like voice without background noise.

Here is an example of what you can achieve using this model:

“William Shakespeare was an English poet, playwright and actor, widely regarded as the greatest writer in the English language and the world’s greatest dramatist. He is often called England’s national poet and the ‘Bard of Avon’.”

After following the steps in the Jupyter notebook, you will be able to provide English text to the model and it will generate an audio output file. All of the scripts to reproduce the results have been published on GitHub in our NVIDIA Deep Learning Examples repository, which contains several high-performance training recipes that use Tensor Cores. Additionally, we developed a Jupyter notebook for users to create their own container image, then download the dataset and reproduce the training and inference results step-by-step.

Our TTS system is a combination of two neural network models:

The Tacotron 2 and WaveGlow model form a TTS system that enables users to synthesize natural sounding speech from raw transcripts without any additional prosody information.

Tacotron 22 is  a neural network architecture for speech synthesis directly from text. The system is composed of a recurrent sequence-to-sequence feature prediction network that maps character embeddings to mel-scale spectrograms, followed by a modified WaveNet model acting as a vocoder to synthesize time-domain waveforms from those spectrograms, as shown in Figure 1.

The network is composed of an encoder (blue) and a decoder (orange) with attention. The encoder converts a character sequence into a hidden feature representation, which serves as input to the decoder to predict a spectrogram. Input text (yellow) is presented using a learnt 512-dimensional character embedding, which are passed through a stack of three convolutional layers (each containing 512 filters with shape 5 × 1), followed by batch normalization and ReLU activations. The encoder output is passed to an attention network (gray) which summarizes the full encoded sequence as a fixed-length context vector for each decoder output step.

The decoder is an autoregressive recurrent neural network which predicts a mel spectrogram from the encoded input sequence one frame at a time. The prediction from the previous timestep is first passed through a small pre-net containing two fully connected layers of 256 hidden ReLU units. The prenet output and attention context vector are concatenated and passed to a stack of two LSTM layers with 1,024 units. The concatenation of the LSTM output and the attention context vector is projected through a linear transform to predict the target spectrogram frame. Finally, the predicted mel spectrogram is passed through a 5-layer convolutional post-net which predicts a residual to add to the prediction to improve the overall reconstruction. Each post-net layer is comprised of 512 filters with shape 5 × 1 with batch normalization, followed by tanh activations on all but the final layer.

Our implementation of the Tacotron 2 model differs from the model described in1, we use:

WaveGlow 1 is a flow-based network capable of generating high-quality speech from mel spectrograms. WaveGlow combines insights from Glow5 and WaveNet6 in order to provide fast, efficient and high-quality audio synthesis, without the need for auto-regression. WaveGlow is implemented using only a single network, trained with only a single cost function: making the training procedure simple and stable. Our current model synthesizes samples at 55 * 22,050 = 1,212,750, which is 55 times faster than “real-time” at 22,050 samples per second sampling rate. The Mean Opinion Score (MOS) show that it delivers audio quality as good as the best publicly available WaveNet implementation trained on the same dataset.

As depicted in Figure 2, for the forward pass through the network, we take groups of eight audio samples as vectors, the ”squeeze” operation, as in Glow5. We then process these vectors through several ”steps of flow”. A step of flow here consists of an invertible 1 × 1 convolution followed by an affine coupling layer. Within the affine coupling layer, half of the channels serve as inputs, which then produce multiplicative and additive terms that are used to scale and translate the remaining channels.

Mixed precision training offers significant computational speedup by performing operations in half-precision format, while storing minimal information in single-precision (FP32) to retain as much information as possible in critical parts of the network. Enabling mixed precision takes advantage of Tensor Cores on Volta and Turing GPUs delivering significant speedups in training time — up to 3x overall speedup on the most arithmetically intense model architectures.

Mixed precision is enabled in PyTorch by using the Automatic Mixed Precision (AMP), library from APEX that casts variables to half-precision upon retrieval, while storing variables in single-precision format. To preserve small gradient magnitudes in backpropagation, a loss scaling step must be included when applying gradients. In PyTorch, loss scaling can be easily applied by using the scale_loss() method provided by AMP. The scaling value to be used can be dynamic or fixed.

Mixed precision training with tensor cores can be enabled by adding the –amp-run flag in the training script, you can see the example in our Jupyter notebook.

Table 1 and Table 2 compare the training performance of the modified Tacotron 2 and WaveGlow models with mixed precision and FP32, using the PyTorch-19.06-py3 NGC container on an NVIDIA DGX-1 with 8-V100 16GB GPUs. Performance numbers (in output mel spectrograms per second for Tacotron 2 and output samples per second for WaveGlow) were averaged over an entire training epoch.

Considering model size and amount of training needed for high quality, GPUs offer a most suitable hardware architecture with an optimal combination of throughput, bandwidth, scalability, and ease of use.

Table 3 and Table 4 show inference statistics for the Tacotron2 and WaveGlow text-to-speech system, gathered from 1,000 inference runs, on 1-V100 and 1-T4 GPU, respectively. Latency is measured from the start of Tacotron2 inference to the end of WaveGlow inference. The tables include average latency, standard deviation, and latency confidence intervals (percent values). Throughput is measured as the number of generated audio samples per second. RTF is the real-time factor which tells how many seconds of speech are generated in 1 second of wall time.

To achieve the results above:

The Tacotron2 and WaveGlow models are trained separately and independently — both models obtain mel spectrograms from short time Fourier transform (STFT) during training. These mel spectrograms are used for loss computation in case of Tacotron 2 and as conditioning input to the network in case of WaveGlow.

By default, our training scripts will launch mixed precision training with Tensor cCores. You can change this behavior by removing the –fp16-run flag.

After training Tacotron 2 and WaveGlow models, or downloaded the pre-trained checkpoints for the respective models, you can perform inference which takes text as input, and produces an audio file.

You can customize the content of the text file, depending on its length, you may need to increase the –max-decoder-steps option to 2,000. The Tacotron 2 model was trained on the LJ Speech dataset with audio samples no longer than 10 seconds, which corresponds to about 860 mel spectrograms. Therefore the inference is expected to work well with generating audio samples of similar length. We set the mel spectrogram length limit to 2,000 (about 23 seconds), since in practice it still produces the correct voice. If needed, users can split longer phrases into multiple sentences and synthesize them separately.

After reading this blog, try the Jupyter notebook to get hands-on experience generating audio from text in real-time.

About Grzegorz Karch
Grzegorz Karch is a senior CUDA Algorithms engineer in the Deep Learning Software group at NVIDIA, focusing on generative models for speech synthesis. Grzegorz holds a PhD in computer science from the University of Stuttgart in Germany, where his research concentrated on scientific visualization.
View all posts by Grzegorz Karch

Graphics / Simulation Tips: Getting the Most out of the DLSS Unreal Engine 4 Plugin