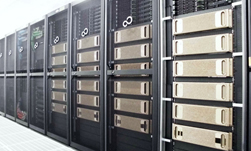 Fujitsu announced today they upgraded the RAIDEN deep learning supercomputers at RIKEN, Japan’s largest research institution, from four petaflops to 54 petaflops, making it one of the most powerful DGX-1 supercomputer installations in the world.
Today’s announcement more than doubles the number of DGX-1 servers at the research institution which went from having 24 to 54, and also brings the latest generation NVIDIA Tesla V100 GPUs to the supercomputer.
“In having built this system, Fujitsu demonstrates its commitment to support cutting-edge AI research in Japan,” the company said in a press release. “The RIKEN Advanced Intelligence Project Center undertook this upgrade in light of its expanded usage needs, with a view toward increasing the efficiency of research and development and promoting further AI research using RAIDEN,” the company stated.
The system was installed in April 2017 and has been used for research and development on next-generation AI technology such as research with enormous neural networks. The RAIDEN supercomputer is also one of the most energy-efficient supercomputers in the world.
“Even in AI research beyond deep learning, computational time is increasing due to the increasing complexity of algorithms and the volumes of data involved,” Fujitsu said.
The supercomputer will be used for research and to solve complex problems involving healthcare, manufacturing and public safety.
Read more >