Building Video Game Levels with the Help of AI 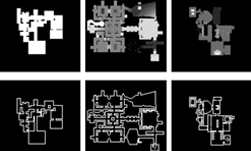 Content creation in the gaming industry is one of the most expensive and time-consuming tasks in the development process. That is why a team of researchers in Italy recently developed a deep learning-based method that can help developers build new video game levels more quickly and more efficiently.
The method uses generative adversarial networks (GANs) to extract features from a game’s blueprint and at the same time generate new levels.
“Our promising results, although preliminary, represent an excellent starting point for future improvements and highlight a viable alternative to classical procedural generation,” the researchers wrote in their research paper.
Using NVIDIA GeForce GPUs and the cuDNN accelerated TensorFlow deep learning framework, the team trained their system on 1000 levels of the game DOOM. The model was trained to extract features such as walkable area, number of rooms, walls, floor height, objects, room segmentation, length of the perimeter, and other categorical attributes.
“Our results show that the quality of the generated levels improves during the training process and, after 36000 iterations, both networks generate levels of good visual quality and with a limited amount of noise,” the researchers said.  “The results also suggest that the conditional GAN can exploit the input feature vector to generate levels with a slightly higher visual and structural similarity to human-designed levels.”

The method mainly creates an indoor map or blueprint of the level. The process allows human designers to focus on the high-level features, the researchers from the Politecnico di Milano said.