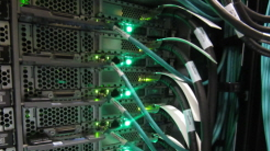 Three times faster than its predecessor, Blue Crystal 4 (BC4) at University of Bristol can perform 600 trillion calculations per second and will accelerate the work of more than 1,000 researchers and engineers.
According to Dr. Christopher Woods, EPSRC Research Software Engineer Fellow at the University of Bristol, “research that used to take a month, now takes a week, and what took a week, now takes only a few hours.”
“We have researchers looking at whole-planet modeling with the aim of trying to understand the earth’s climate, climate change and how that’s going to evolve, as well as others looking at rotary blade design for helicopters, the mutation of genes, the spread of disease and where diseases come from,” he added.


BC4 is a Lenovo NeXtscale cluster that includes 32 GPU-accelerated nodes, with each having two NVIDIA Tesla P100 GPU accelerators and also a visualization node equipped with NVIDIA GRID GPUs. Designed, integrated and configured by the HPC, storage and data analytics integrator OCF, BC4 has more than 15,000 cores making it the largest UK university system by core count and a theoretical peak performance of 600 Teraflops.
Dr David Matthews, Senior Lecturer in Virology at the University of Bristol, who used the previous Blue Crystal supercomputer for a €1.8 million study into Ebola, looking at the speed of virus evolution, and the corresponding effect on vaccines, diagnostics and treatment, will use BC4 for his latest research into Dengue fever and Zika virus.
Read more >