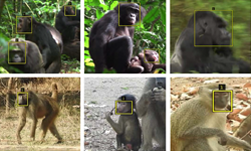 To help with animal conservation efforts, University of Oxford researchers developed a deep learning-based model that can identify individual chimpanzees with 93% accuracy and correctly classify their sex with 96% accuracy.

“Automating the process of individual identification could represent a step change in our use of large image databases from the wild to open up vast amounts of data available for ethologists to analyze behavior for research and conservation in the wildlife sciences,” the researchers stated in their paper.

For the training dataset, the researchers took approximately 50 hours of chimpanzee footage from 14 years to train a deep convolutional neural network. This allowed the team to extract over 10 million face images to use during training.

“Using the identified faces, we generated co-occurrence matrices to trace changes in the social network structure of an aging population,” the researchers explained.

When comparing the model to human observers, it took experts an estimated 55 minutes and novices 130 minutes to correctly complete the experiment. The model achieved 84 percent accuracy in just 60 milliseconds, outperforming the human observers in speed and accuracy.

The TITAN X GPUs were also used for inference.

“The tools we developed enable easy processing and annotation of video datasets, including those from other species. Such automated analysis unveils the future potential of largescale longitudinal video archives to address fundamental questions in behavior and conservation,” the researchers said.