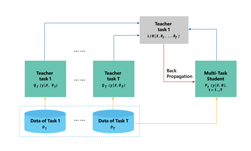 “For each task, we train an ensemble of different MT-DNNs (teacher) that outperforms any single model, and then train a single MT-DNN (student) via multi-task learning to distill knowledge from these ensemble teachers,” reads a summary of the paper “Improving Multi-Task Deep Neural Networks via Knowledge Distillation for Natural Language Understanding.”

The new records lie at the crux of research in the AI speech community to improve conversational AI algorithms, which consists of neural networks capable of speech recognition, natural language understanding, and text-to-speech systems.

Updated results and code to replicate the results will be published on GitHub in June.