In this blog post I will briefly discuss the importance and simplicity of graph coloring and its application to one of the most common problems in sparse linear algebra – the incomplete-LU factorization. My goal is to convince you that graph coloring is a problem that is well-suited for GPUs and that it should be viewed as a tool that can be used to expose latent parallelism even in cases where it is not obvious. In fact, I will apply this tool to expose additional parallelism in one of the most popular black-box preconditioners/smoothers—the incomplete-LU factorization—which is used in many applications, including Computational Fluid Dynamics; Computer-Aided Design, Manufacturing, and Engineering (CAD/CAM/CAE); and Seismic Exploration (Figure 1).

What is Graph Coloring?

In general, graph coloring refers to the problem of finding the minimum number of colors that can be used to color the nodes of a graph, such that no two adjacent (connected) nodes have the same color. For example, the graph in Figure 2 can be colored with two colors (green and yellow).

Why is this mathematical problem of interest to us? Well, imagine that each node in the graph represents a task and each edge represents a dependency between two tasks. Then, graph coloring tells us which tasks are independent. Assuming that the edges have no particular direction assigned to them, we can process the tasks with the same color in parallel (they are independent by construction), perform a barrier, and proceed to the next set of tasks that are identified by a different color. Not all problems can be mapped to such a framework, but many are amenable to it.

The next question we should answer is how difficult is it to perform graph coloring? Now that the cuSPARSE routine provides a graph coloring implementation in the csrcolor() routine, for most users it is trivially easy. But in this post I want to talk about implementing the algorithm itself in a bit more detail.

It is well-known that finding the best solution to this problem is NP-complete. However, there are many parallel algorithms that can find an approximate solution very quickly. Indeed, the exact solution is often not even required, as long as we obtain enough parallelism to fully utilize our parallel computing platform.

A Parallel Algorithm for Graph Coloring

The typical parallel algorithm for finding the approximate graph coloring is based on Luby’s maximal independent set algorithm. In this algorithm we

The third step allows us to find the maximal independent set, but graph coloring works even if we only find an independent set, although it will require more colors. The nodes in the (maximal) independent set can be assigned the same color, and the algorithm proceeds in the same fashion to color the remaining nodes of the graph.

The following code sample shows a CUDA C++ kernel for finding an independent set from an adjacency matrix of a graph stored in compressed sparse row (CSR) format, where Ao contains the matrix row offsets, Ac contains the column indices and Av contains the non-zero values.

Luby’s algorithm is very powerful because it provides an outline that can be adjusted for different purposes using different heuristics. For example, we can use multiple hash functions instead of random numbers to assign multiple colors at once in order to perform the graph coloring faster. We can also attempt to use the degree (number of in/out edges) of a node in combination with a random number to color nodes with larger/smaller degree first, which could potentially allow us to perform reordering that minimizes fill-in and exposes additional parallelism. Many such combinations are still open research problems.

Another interesting aspect of this parallel outline is that it is ideally suited for GPUs. It is very easy to map the available parallelism to the CUDA programming model. For example, each CUDA thread can look only at its local neighbors and essentially perform the color assignment independently of others.

Figure 3 illustrates the performance of the above algorithm on several sample problems with two different heuristics based on the original idea about random numbers (Jones-Plassmann-Luby) and the novel idea about multiple hash functions (Cohen-Castonguay). The experiments were performed with CUDA Toolkit 7.0 on Ubuntu 14.04 LTS, on an NVIDIA Tesla K40c GPU Accelerator. For more details please refer to our technical report [1].

triangular matrices, so that

This approximation is later used as an iterative method preconditioner or an algebraic multigrid smoother, and is designed to speed up convergence to the solution of a given linear system.

In order to find the

triangular factors we perform Gaussian elimination; that is, we scale and add rows together to eliminate elements below the main diagonal of

If we performed the above algorithm in dense storage, we would simply compute the LU-factorization without pivoting (ignore the diagonal boosting for now). However, in sparse storage the algorithm is more complex. Notice that as we proceed with Gaussian elimination, the matrix

will have more elements than

, because as we scale and add two rows the number of elements in the resulting row will be the union of the elements of both rows. Therefore, in order to compute the LU-factorization we first need to estimate the required storage, allocate it and compute all the extra elements, which can be quite computationally expensive.

On one hand, in order to parallelize this algorithm, we can analyze the dependencies between rows, and find out which rows can be processed in parallel. For example, for a given coefficient matrix

the dependencies between rows are represented by the directed acyclic graph (DAG) in Figure 4.

Notice that it is identical to the graph on which we performed graph coloring in Figure 2. Here the independent rows are organized into levels and this parallel approach is called level scheduling.

On the other hand, we can explicitly reorder the matrix a priori based on graph coloring (such that nodes with the same color are ordered next to each other) and only then analyze it for parallelism. The reordered matrix based on the coloring from the previous section is shown below. 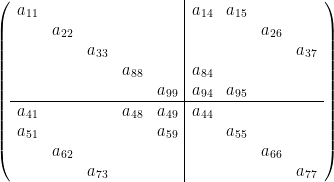 It turns out that reordering based on graph coloring exposes additional parallelism, making the dependency dag shorter and wider. This means fewer colors, which means fewer parallel stages with greater parallelism in each stage.

In fact, for realistic matrices we can have up to 100 times more rows per level after performing reordering based on graph coloring, as Figure 6 illustrates.

Ultimately, as a result of graph coloring we are able to better utilize the GPU. Indeed, we can now take full advantage of its memory bandwidth because we have exposed enough parallelism in our problem. We show the resulting improvement in performance on a sample set of matrices in Fig. 7, where we have used the coloring algorithm implemented in the cuSPARSE library csrcolor() routine. The experiments were performed with CUDA Toolkit 7.0 on Ubuntu 14.04 LTS, on an NVIDIA Tesla K40c GPU Accelerator. For more details please refer to the technical report [1].

Finally, note that we have used approximate graph coloring, and therefore could potentially further improve the performance of ILU0 with better heuristics or re-coloring techniques.

Graph coloring is a general technique that can enable greater parallelism to be extracted from a problem. As an example, I have shown that reordering matrix rows based on graph coloring can provide a significant speedup of the to the incomplete-LU factorization algorithm on the GPU. Also, I have shown that parallel approximate graph coloring itself is well suited for the GPU. In fact, the algorithm parallelizes extremely well and can be adapted to a variety of problems by using different heuristics.

About Maxim Naumov
Maxim Naumov is a Senior Research Scientist at NVIDIA. His interests include parallel algorithms, numerical linear algebra, optimization and graphs. He contributes to the nvGRAPH Data Analytics library, and he previously led the development of the AmgX library, which provides distributed Algebraic Multigrid, Krylov and Relaxation-based solvers. He has also worked on the cuBLAS, cuSPARSE and cuSOLVER(RF) libraries that are part of the CUDA Toolkit. In the past, Maxim held positions in the NVIDIA CUDA Platform team, and the Intel Microprocessor Technology Lab and Computational Software Lab. He was also awarded the 2008-09 Intel Foundation Ph.D. Fellowship during his graduate studies. He received his Ph.D. in Computer Science (with specialization in Computational Science and Engineering) in 2009 and his B.Sc. in Computer Science and Mathematics in 2003, all from Purdue University, West Lafayette.
View all posts by Maxim Naumov 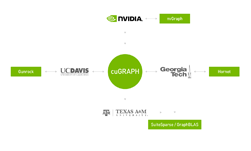 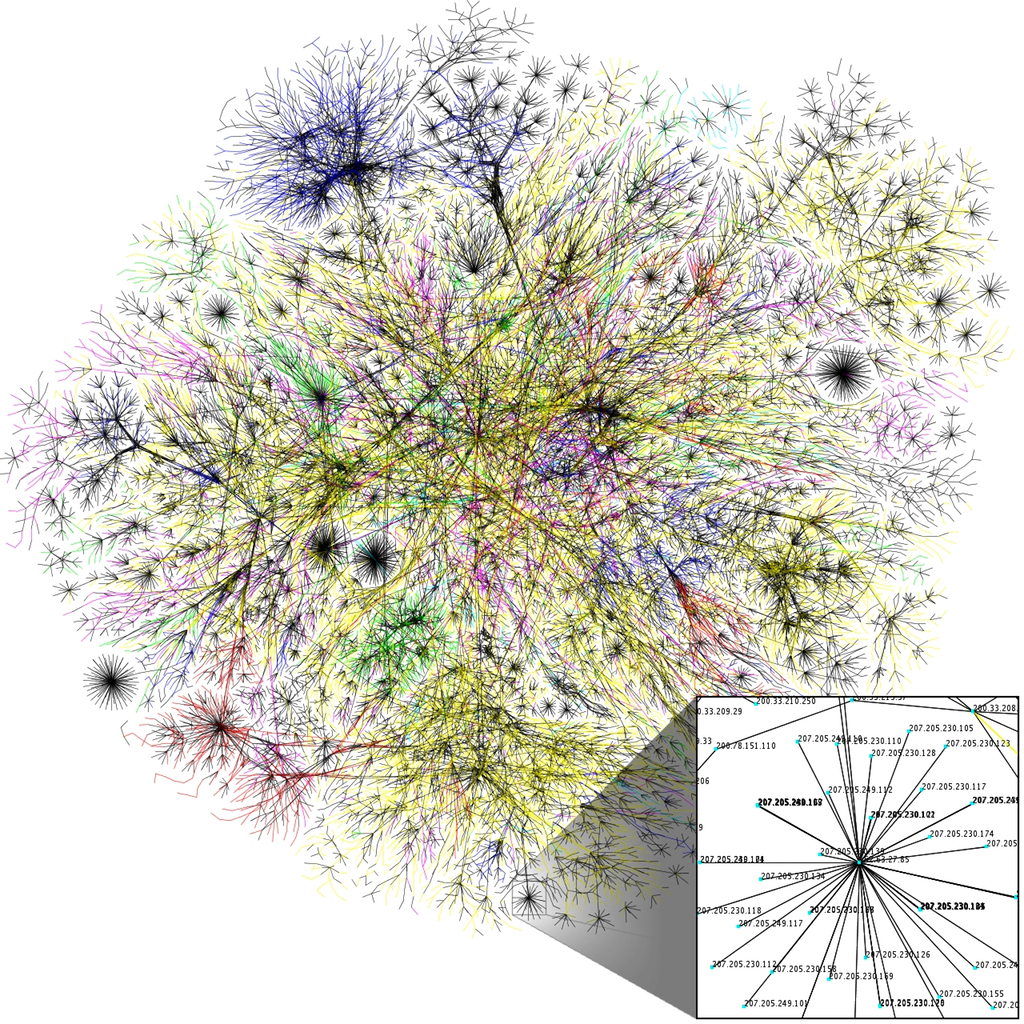 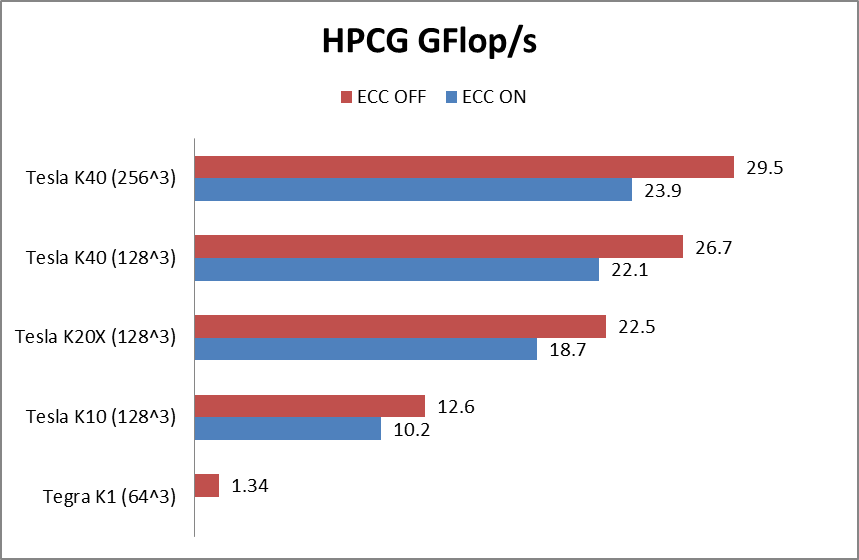