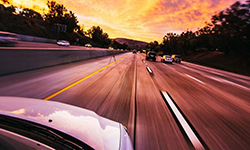 Self-driving cars can run into critical situations where a human driver must retake control for safety reasons. Researchers from the Technical University of Munich have developed an AI early warning system that can give human drivers a seven-second heads-up about these critical driving scenarios.

The researchers used NVIDIA GPUs for both training and inference of the failure prediction  AI models. The model recognizes when patterns in a driving situation’s sensor data look similar to scenarios the self-driving system was unable to navigate in the past, and issues an early warning to the driver.

When tested on public roads using autonomous development vehicles from the BMW Group, the AI model was able to predict situations that self-driving cars would be unable to handle alone seven seconds ahead of time, and with over 85 percent accuracy. These results outperform state-of-the-art failure prediction by more than 15 percent.

“The big advantage of our technology: we completely ignore what the car thinks. Instead we limit ourselves to the data based on what actually happens and look for patterns,” said Eckehard Steinbach, Chair of Media Technology and member of the Board of Directors of the Munich School of Robotics and Machine Intelligence. “In this way, the AI discovers potentially critical situations that models may not be capable of recognizing, or have yet to discover.”

The AI can be improved with larger quantities of data from autonomous vehicles that are under development and undergoing testing on the road. The learnings collected from each individual vehicle can be used for future iterations of the model, and deployed across the entire fleet of cars.

“Every time a potentially critical situation comes up on a test drive, we end up with a new training example,” said Chrisopher Kuhn, an author on the study.