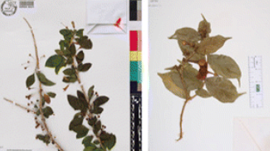 Researchers from the Costa Rica Institute of Technology and French Agricultural Research Centre for International Development developed a deep learning algorithm to automatically identify plant specimens that have been pressed, dried and mounted on herbarium sheets.
According to the researchers, this is the first attempt to use deep learning to tackle the difficult taxonomic task of identifying species in natural-history collections.
With nearly 3,000 herbaria in the world, hosting an estimated 350 million specimens, only a fraction of them have been digitized. The US National Science Foundation’s iDigBio project has more than 150 million images of plants and animals from collections around the country and would like to digitalize their database so researchers worldwide can take advantage of the collection.


Using GeForce GTX GPUs and the cuDNN-accelerated Caffe deep learning framework, they trained their convolutional neural networks on over a 1,000 different species from more than 260,000 scans of herbarium sheets. The trained algorithm has 80% accuracy and the correct answer is within the top 5 picks 90% of the time, which the researchers claim can probably out-performs a human taxonomist by quite a bit.
“People feel this kind of technology could be something that will decrease the value of botanical expertise,” says botanist Pierre Bonnet of the French Agricultural Research Centre for International Development in Montpellier in response to many of who feel that their field is undervalued. “But this approach is only possible because it is based on the human expertise. It will never remove the human expertise.” People would also still need to verify the results, he adds.
Using deep learning will allow researchers to perform additional analyses. Herbaria samples contain a wealth of data: when and where the sample was collected, for example, and characteristics such as whether the plant was flowering or fruiting at collection time and how densely clustered the flowers were. Because some samples are centuries old, that data can paint a portrait of how plants have adapted to shifting climates — an area of growing interest in the face of concerns about climate change.
Read more >

Rendering Implementing Path Tracing in 'Justice': An Interview with Dinggen Zhan of NetEase