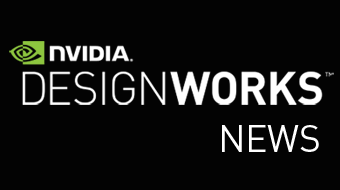 Get the latest SDK and tools designed for developers creating professional graphics, advanced rendering, video processing, material design, 3D printing and virtual reality applications. We are excited to share a comprehensive update of our innovative and industry leading SDKs and tools for the DesignWorks December 2016 release.

Register to get access to the latest software releases and tools and receive notifications and invites to join special developer events, early access programs and educational webinars. The program is free-to-join and open to all developers.

OptiX is now free for commercial-use

OptiX is now entirely free for use within any application (including commercial distribution). Version 4.0 is a complete re-implementation and re-architected update of the OptiX API. This release adds DGX-1 and NVLink support and lays the foundation for improved performance and multi-GPU scaling. Get OptiX 4.0.2 now!

Designed to accelerate large scale volumetric datasets, NVIDIA GVDB Sparse Volumes SDK was developed to take advantage of GPU cores, which are ideally suited for parallel processing huge numbers of voxels. With code samples for 3D Printing, motion picture visual effects and scientific simulations, we invite everyone working with volumetric data to join our open Beta program. Leading up to our release next year, we will continue to enhance the SDK with new operations such as solid voxelization, multi-channel computation, and OpenGL integration. The Beta is now available for Windows and Linux platforms.

The 2016.3 release of Iray SDK adds support for MDL Archives, faster scene updates for Iray Photoreal and a batch mode for Iray Interactive. MDL Archives is a new container format that provides a way of combining a set of MDL packages and modules, as well as resources like textures, into a single file. This allows for easier deployment and versioning. Iray SDK 2016.3 will be availble from our SDK partner providers MiGenius and Lightworks in early December.

The NVIDIA MDL SDK is a set of tools to integrate NVIDIA material definition language (MDL) support into rendering applications. It contains components for loading, inspecting, editing of material definitions as well as compiling MDL functions to GLSL, PTX and LLVM-IR. The 2016.3 release of MDL SDK adds support for MDL Archives, a new container format that provides a way of combining a set of MDL packages and modules, as well as resources like textures, into a single file. MDL SDK 2016.3 will be available in early December. Sign up for access!

Linux Graphics Debugger is a 3D graphics development tool that allows developers to debug and profile OpenGL 4.x on Linux. It enables professional graphics developers to get the most out of their NVIDIA Quadro and GeForce GPUs on a variety of Linux distributions. Release 2.0 brings frame debugging and profiling support to the NVIDIA Pascal GPU family and a new Range Profiler to view how your application utilizes the GPU. Now available for download under NVIDIA DesignWorks.

NVIDIA Nsight Visual Studio Edition 5.2 is now available for download! This release added features for virtual reality application developers, including Oculus SDK and OpenGL Multicast support as well as a dedicated VR Inspector view. Vulkan API support has been added and Direct3D 12 support has been extended. We introduced the Range Profiler as well as expanded compute and graphics debugging features, including support for long lived variables, FP16 datatype, and the NVIDIA Pascal GPU family.

NVIDIA Capture SDK enables developers to easily and efficiently capture, and optionally encode, the display content or an application’s graphics context. Version 6.0 focuses on NVFBC improvements including, improved capture times, stereo support, and 10-bit ARGB and HDR support for Pascal based GPUs. Capture SDK 6.0 will be available for download under NVIDIA DesignWorks in early 2017.