The NVIDIA Iray SDK provides a state of the art, yet easy to implement, photorealistic rendering solution with a robust C++ API for seamless integration into 3D applications and/or creating powerful client/server applications.

The Iray SDK provides a comprehensive C++ API for integration and customization tasks. Designed for efficiency and ease of use, the API provides a single access point to the C++ software libraries, which can be dynamically loaded and linked to visualization applications at runtime in order to integrate Iray rendering technology.

Iray provides multiple rendering modes addressing a spectrum of use cases requiring realtime and interactive feedback to physically based, photorealistic visualizations and lighting simulations. Iray is used in a wide array of industries to give designers the ability to quickly create photorealistic studies of their work, and speed their products to market.

NVIDIA Iray is designed for seamless integration into any 3D content creation application using an intuitive SDK. Contact Siemens LightWorks and migenius directly to inquire about obtaining the Iray SDK.

Siemens Lightworks have over 25 years’ experience bringing the best visualisation and rendering technologies to companies across a variety of sectors through their visualisation specialists.

Built on NVIDIA’s Iray technology, Lightworks created Iray+ as an easy to use software development kit which any company can integrate into their design workflows, CAD systems, configurators, end-user applications and customer experiences. Having developed Iray for 3ds Max and integrated Iray technology into applications, including Siemens NX, Lightworks' team can help your company achieve the highest quality visualisation.

The migenius RealityServer platform offers an easy to use solution for building web applications with Iray using our 3D web services framework. We offer a range of Iray related products and services, including RealityServer, Bloom Unit for SketchUp, Iray integration services, Iray licensing, Quadro VCA hardware sales and software development services for your application. From integration support to full application creation, migenius can help provide the tools to build your web applications.

The Importance of Accuracy

Rendering software packages have become extremely photorealistic over the last few years. However, few validations have been done to verify their accuracy against real life scenarios.

The document describes the performance of NVIDIA® Iray® against the CIE Technical report CIE 171:2006 (Test Cases to Assess the Accuracy of Lighting Computer Programs).

The validation approach is based on the concept of testing the different aspects of light propagation separately. A suite of tests was designed and each test addressed a specific aspect of the lighting simulation domain. 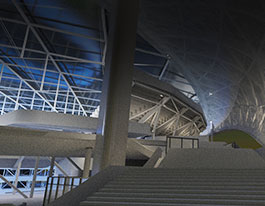 Being able to see the ray tracing in near real time is hugely valuable to us. We have run numerous tests comparing Iray to AGi32, and our confidence has grown to where we are about to release our first projects that were designed using Iray. This will give us the final real-world test results we need.

Architecture firm, Gensler is combining photo-realistic 2D renderings, which architects have long used to show clients their work, with NVIDIA’s Iray VR technology. Viewed on HTC’s Vive VR headgear, the technology accurately simulates what it’s like to stand in a building’s lobby or in a meeting room, including a sense of the scale of the room. It provides a 3D effect so realistic, viewers can peer around objects like chairs and support posts.

Hao Ko, a Gensler principal and design director on the NVIDIA project, said his firm worked with NVIDIA to create a tool that lets the architects quickly try different types of building materials and lighting situations in virtual reality.

The technology can simulate, for example, “how natural daylight is going to react according to different materials we have in the building.” he said. “It’s a whole heck of a lot cheaper to make changes in this (virtual) world than when you’re under construction.”