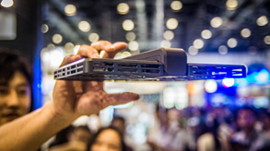 After raising $25 million in funding, Beijing-based ZeroZero Robotics came out of stealth mode and launched their Hover Camera just days before the GMIC Beijing 2016 trade show, the ‘CES of China.’
Co-founder MQ Wang, a Stanford PhD alum focused on machine learning and natural language processing, was inspired to create the autonomous Hover Camera after watching a documentary about a man who walked 1600 miles solo across Australia.
Using a machine learning model trained on an NVIDIA Tesla K40 GPU, the camera automatically tracks your face to take photos and capture videos wherever you go.
“We wanted the user experience to be very natural — easy to use,” MQ told Mashable. “We wanted to make sure the learning curve for users is minimum. So there is no remote control or anything. There’s no calibration process.”

The final version of the product will be released this summer.
Read more >>