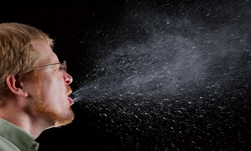 Researchers from Loughborough University, Western General Hospital, the University of Edinburgh, and the Edinburgh Cancer Centre in the United Kingdom, recently developed a deep learning-based method that can analyze compounds in the human breath and detect illnesses, including cancer, with better than-human average performance.
“The sense of smell is used by animals and even plants to identify hundreds of different substances that float in the air. But compared to that of other animals, the human sense of smell is far less developed and certainly not used to carry out daily activities,” researcher Andrea Soltoggio wrote on Smithsonian.com. “For this reason, humans aren’t particularly aware of the richness of information that can be transmitted through the air, and can be perceived by a highly sensitive olfactory system.”
Using NVIDIA Tesla GPUs and the cuDNN-accelerated Keras, and TensorFlow deep learning frameworks, the team trained their neural network on data from participants with different types of cancer receiving radiotherapy, said researcher Angelika Skarysz, a PhD research student at Loughborough University.
To increase the neural network’s efficiency, the team increased the original training data by using data augmentation. The convolutional neural network dataset was augmented 100 times, the team said.
“This is the first successful machine learning attempt at learning ion patterns and detecting compounds from raw GC-MS data,” the team said. The convolutional neural network achieved the best performance when implemented with two particular features: one-dimensional filters to adapt to the particular structure of GC-MS data, and a three-channel input to read high, medium, and low-intensity signals from the highly variable GC-MS spectrum. The novel approach was shown to discover labelling errors from human experts, suggesting better-than-human average performance.” the researchers explained.
The researchers also used the GPUs for inference, which in this case was scanning the breath samples.


“Computers equipped with this technology only take minutes to autonomously analyze a breath sample that previously took hours by a human expert,” Soltoggio said. AI is making the whole process cheaper – but above all it is making it more reliable.
The work will be presented at the International Joint Conference on Neural Networks (IJCNN 2018), Rio de Janeiro, Brazil next month. The research paper was recently published on Research Gate.
Read more >