GPU-accelerated algorithms and DNNs for perception and planning; ML workflows for supervised learning as well as reinforcement learning.

Modular robotic algorithms that provide sensing, planning, or actuation for both navigation and manipulation use cases. 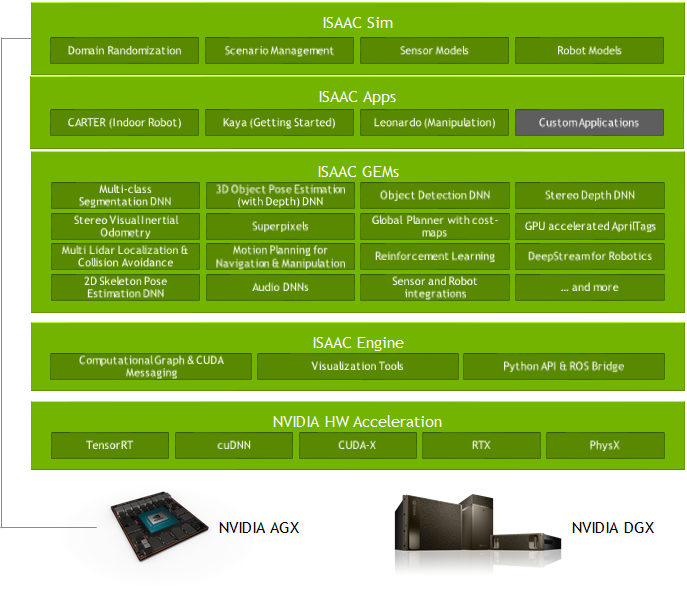 Isaac SDK uses machine learning and continuous testing workflows with Isaac Sim running on NVIDIA® DGX™ Systems. Developed to meet the demands of AI and analytics, NVIDIA® DGX™ Systems are built on the revolutionary NVIDIA Volta™ GPU platform. Combined with innovative GPU-optimized software and simplified management tools, these fully-integrated solutions are designed to give data scientists the most powerful tools for AI and ML.

The Isaac Engine is a software framework to easily build modular robotics applications. It enables high-performance data processing and deep learning for intelligent robots. Robotics applications developed on Isaac Robot Engine can seamlessly run on edge devices like the NVIDIA® Jetson AGX Xavier™ and NVIDIA® Jetson Nano™, as well as on a workstation with a discrete NVIDIA® GPU like T4. 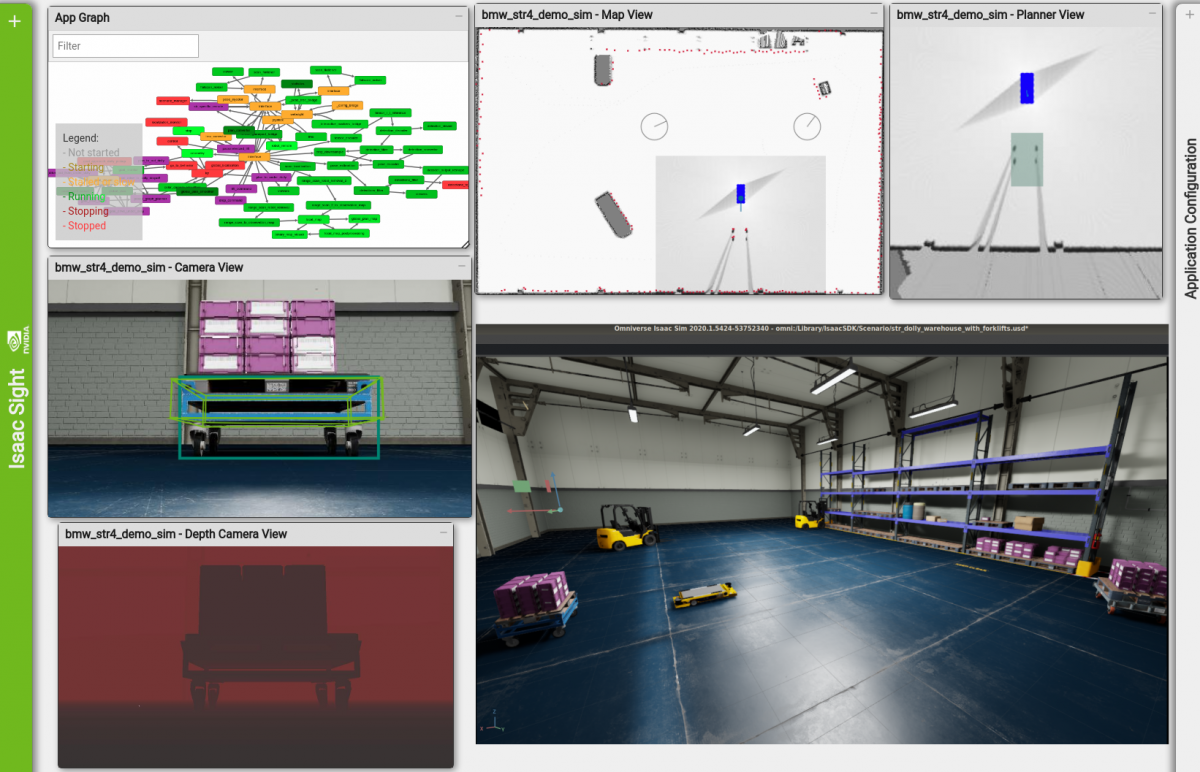 Get Started with Isaac SDK

GEMs are modular capabilities for sensing, planning, or actuation that can be easily plugged into a robotics application. For example, developers can add obstacle detection, stereo depth estimation, or human speech recognition to enrich their robot use cases. Similarly, developers can use the Isaac navigation stack, a collection of modules to build a robotics navigation application, to their robot.

This video shows detection and pose estimation of a dolly for a warehouse robot to drive under and pick.

This video shows detection and pose estimation of a container a cobot to use an end effector to pick and place.

Ability to customize graphs, in an open space (like a factory) where robots can use optimal path.

This video shows a robot operating in lanes (optimal path) rather than taking the shortest paths, which are ‘costly’.

This video shows the fusion of IMU and visual odometry.

360 perception for localization for increased robustness in ambiguous environments and reduced location uncertainty.

This video shows the benefit of having two lidars for collision avoidance.
Support for new sensors

*Note: The HW driver is not integrated with Isaac SDK 2020.1; please contact the vendor for the Isaac SDK Driver.
Support for new robot platforms

*Note: The HW driver is not integrated with Isaac SDK 2020.1; please contact the vendor for the Isaac SDK Driver.

Deep Neural Network (DNN) segmentation of images into classes of interest like drivable space and obstacles.

This video shows a DNN performing the segmentation of multiple classes including collision free space.

An efficient low/mid-level representation of image data, which greatly reduces the number of image primitives for subsequent vision tasks.

For a detailed list of GEMs visit Isaac SDK Documentation.


Get Started with Isaac SDK

Video showing an autonomous mobile robot (modeled in Isaac Sim) detecting and estimating the pose of a dolly using neural networks, driving under it and lifting/moving it autonomously.

Video showing the use the factory of the future simulation asset to train the robot to dock under Dolly.

Video showing the use the factory of the future simulation asset to try out the network trained using Reinforcement Learning application.

Video showing how simple it is to train an object detection network using Transfer Learning Toolkit with a dataset generated from a simulation.

Laikago: The robot on four legs!

Video showing the upgraded quadruped robot built using Kaya as a reference; showing its ability as an autonomous machine that can navigate and avoid obstacles.

Isaac Apps from prior releases

Carter is an Isaac SDK reference robot platform for autonomous indoor delivery and logistics based on the NVIDIA Jetson platform. Developers can build their own Carter robot using sample applications. With the NVIDIA Isaac SDK, developers can add capabilities for localization, autonomous navigation, map edition, path planning, and state machines. Some of the included apps are Map Creation, Map Waypoint, Pose, Patrol, Random.

Kaya: To get started with Isaac SDK

People who would like to get started with Isaac SDK can build their own small robot platform using the Kaya reference robot platform. Kaya can be built using off-the-shelf components and 3D printed parts. The low-cost Kaya robot takes advantage of the new NVIDIA® Jetson Nano™. Samples applications built for the platform include April tag detection, obstacle avoidance, remote operation, object classification based on Yolo and much more. Some of the included apps are Follow-me, Mapping, Detect/Classify, etc.

Isaac Sim is a virtual robotics laboratory and a high-fidelity 3D world simulator that accelerates research, design, and development by reducing cost and risk.

Factory of the Future
Video shows the 3D environment of a factory of the future. Assets are designed in a modular way to enable creation of random factory layouts and object placement. This environment is used to train DNNs and test multiple robots in a simulated environment.

To get more information and to register for Early Access to Isaac Sim 2020.1 (for manipulation) click here.