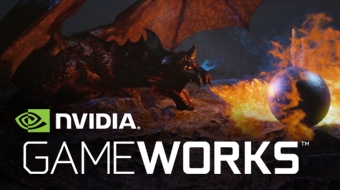 Today at GDC NVIDIA released of the latest version of GameWorks. We are accelerating the pace of innovation in game development through advanced technologies for rendering, VR, ray tracing and simulation. GameWorks DX12 adds a range of new APIs, combined with powerful tools and support for DirectX® 12 and DirectCompute. This is our best release yet.

We released tools and technologies in the following catories.

Read on to learn more.

Flow is a library for rendering combustible fluids, fire and smoke that can interact realistically with the environment. Flow launches with DirectX 11 and 12 support.

Flex is a particle-based simulation system. Objects can be solid, fluid or in any state in between. This means developers can create simulations that were previously impossible with traditional simulation systems. Flex 1.1 supports DirectCompute under DirectX 11 and 12.

HairWorks is our SDK for simulating and rendering fur and hair. It works with off the shelf grooming systems and our HairWorks Viewer. Version 1.3 supports DirectX 12.

PhysX is the leading physics engine used by game developers. This latest version of PhysX has improved rigid body support as well as a new API that makes it easier to integrate into game engines and we still supply the source code.

GRB is a plug-in for PhysX 3.4. It implements the exact same rigid body simulation used by PhysX, but with GPU acceleration, allowing for much larger but consistent simulations.

Blast enables pervasive destruction. Sitting on top of PhysX, Blast makes it easy for artists and game designers to add destruction to their games.

Our physically based ocean wave simulator. Version 1.7 adds support for DirectCompute. It comes with source code.

Developing games is hard. Great tools make it easier and that is why NVIDIA invests in tools for Developers.

The latest version of Nsight adds support for profiling and tracing of simultaneous compute and graphics workloads. It also adds support for OpenVR alongside the Oculus SDK allowing for VR development on either platform. At the booth NVIDIA will be showing profiling and debugging on the latest Windows 10 hybrid laptops. Learn more here.

Aftermath is a diagnostic tool that developers can use for analysing DirectX 12 error reports. The tool is supplied with source code for easy integration. Learn more here.

Takes a texture or photo as input and provides the user with an organic variation.

Improves the image quality in games by intelligently upscaling a texture or image by up to 4x.

You can learn more about GameWorks Materials and Textures here.

Until the 2017.1 release, developers can apply for an early access build of VRWorks in Unity here.

VRWorks, including MRS, SPS, LMS, and Direct Mode, is now available for DirectX 12. Developers can download the latest SDK with DirectX 12 support from our website today .

Capturing and Sharing the Art of Games

As well as rendering and simulation technologies, NVIDIA’s SDK contains technology for in-game photography and video sharing. Our new Ansel and ShadowPlay Highlights APIs let gamers capture cinematic moments and share them with their friends, family and fans on the internet.

Ansel has been available to Unreal and Unity developers as a plugin for a few months, but now we are releasing the Ansel SDK with source code so developers everywhere can add in-game photography to their titles. In addition, we announced at GDC that Ansel support is coming soon to Lumberyard, making Ansel even more accessible to games based on Amazon’s engine. Learn more here.

This new feature automatically captures a player’s game highlights as a shareable video. This feature will debut in the game Lawbreakers from Boss Key Productions. Learn more here.