Aftermath: Debugging Crashes and TDRs on the GPU 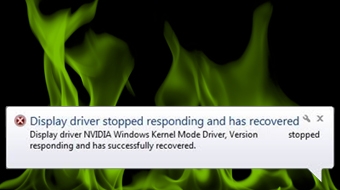 “Device Removed” – the bane of every PC rendering programmers existence. “The GPU has crashed and who knows why?” If you’ve said this (or similar; accounting for variants including profanity) then this blog post is for you!

The recent introduction of low-level graphics APIs has presented a new challenge for the developers adopting them; avoid crashing the GPU. With previous high-level graphics APIs, the onus was mostly on the driver to make sure that, all resources in use are correctly paged (page-fault), virtual addresses used are valid (segmentation-fault), and dependencies/waits are in order (timeout) – or put simply; to not crash the GPU! With that recent shift in paradigm we’re seeing an increasing need for the ability to debug the GPU – a lot of this need has been met with the updates to Microsoft’s debug layer (especially GPU-Based Validation) however, we still need another line of defence for when an issue slips through the cracks – and there’s still no option for debugging those crashes that happen “in the wild” (after an game has shipped).