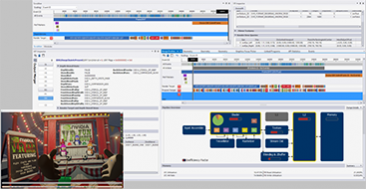 NVIDIA Nsight™ Visual Studio Edition 5.3 - being shown at GDC 2017 - will soon be available for download in the NVIDIA Registered Developer Program.

This release adds OpenVR support alongside the current Oculus SDK support for virtual reality development in Direct3D and OpenGL applications. Vive and Oculus demos will be on display at the NVIDIA booth.

If performance is what you crave, check out OpenGL and Direct3D trace and profiling accuracy and efficiency improvements and new support for simultaneous compute and graphics workloads.

While you’re there, ask about other workflow improvements including: