The Technology Behind the Viral Prisma Photo App 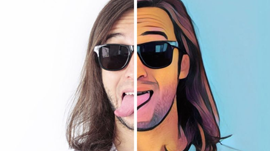 The new Prisma mobile app that transforms your photos into a work of art has been downloaded nearly 17 million times since it was released last month on iOS devices and is now surpassing 2 million a day after it was made available for Android users this week.
People of all ages and celebrities around the world have used the Russian startup’s app to turn their images into styles of famous artists like Van Gogh, Munch, and Picasso.
Prisma doesn’t just apply a filter, instead they use deep learning to analyze an image’s visual characteristics and apply those artistic flourishes to another image.
The underpinning technology is based on research published by Leon A. Gatys last year titled “A Neural Algorithm of Artistic Style”. Prisma further developed the technology using NVIDIA GPUs and the cuDNN-accelerated Torch framework for both the training of their deep learning models and the inference process that produces the artsy visuals for mobile phones.
https://www.instagram.com/p/BHAbfdZg_Ou/?taken-by=damedvedev
The startup is working on a new tool that will allow users to apply similar effects to video clips, which is expected to roll out in the coming months.
Read more >>