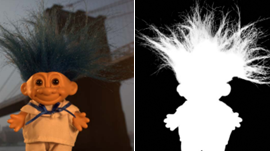 Researchers from Adobe, the Beckman Institute for Advanced Science and Technology and University of Illinois at Urbana-Champaign developed a deep learning-based method that clips objects from photos and videos.
Researchers have developed a number of different artificially intelligent programs to automatically subtract a background from an image, but most are based on colors. When presented with an image with similar colors such as the greens in a landscape photo, those programs tend to fail, Adobe says.
The AI method called “Deep Image Matting”, works by learning the structure of the “color” channel that contains all the transparencies in an image.
Using TITAN X GPUs and cuDNN with the Caffe deep learning framework, the researchers used nearly 50,000 images to train their network and 1,000 images to test the accuracy – the AI system is then able to guess the foreground and background elements of the training images and compare its guesses to the known reality of the images.

Although this is still under research, the AI method can possibly eliminate the need for green screen sets and eventually make its way inside one of Adobe’s photo-editing programs.
Read more >