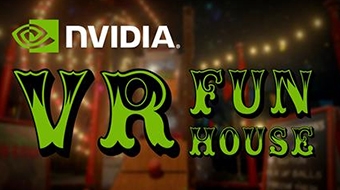 Today NVIDIA released its first ever video game. VR Funhouse is a carnival of fun based on GPU accelerated simulation technology. Each of the seven minigames shows how the immersion of virtual reality can be increased through advanced rendering, haptic feedback and realistic physics. VR Funhouse is available on steam today.

VR Funhouse is built on top of Unreal Engine from Epic games. It demonstrates how many NVIDIA technologies can be used in VR. These API's are available for free to any developer who is a member of our developer program.

Recently Adam Savage from Tested and Mythbusters stopped by NVIDIA HQ to meet with Rev Lebaredian, Senior Director, GameWorks. As you can see they had a lot of fun playing the game.

Try GameWorks and VR Funhouse for yourself

Get VR Funhouse today on Steam: Get It Now