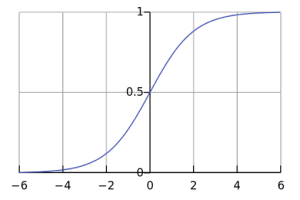 Linear regression is the more common form of regression and fits a linear model through a set of data points. The output y can be estimated as a straight line that can be visualized as

Goodness-of-fit of a Logistic Regression

The quality of a logistic regression model is determined by measures of fit and predictive power. R-squared is a measure of how well the independent variable in the logistic function can be predicted from the dependent variables, and ranges from 0 to 1. Many different ways exist to calculate R-square including the Cox-Snell R2 and the McFadden R2. Goodness of fit, on the other hand, can be measured using tests such as the Pearson chi-square, Hosmer-Lemeshow, and Stukel tests. The right type of test to use will depend on factors such as the distribution of p-values, interactions and quadratic effects, and grouping of data.

Logistic regression is similar to a non-linear perceptron or a neural network without hidden layers. Logistic regression is most valuable for areas where data are scarce, like the medical and social sciences where it is used to analyze and interpret results from experiments. Because regression is simple and fast, it is also used for very large data sets. Regression, however, cannot be applied to predict continuous outcomes or used with data sets that are not independent. There is also a possibility of overfitting the model to the data when using logistic regression.