For more recent info on NVLink, check out the post, “How NVLink Will Enable Faster, Easier Multi-GPU Computing”.

NVIDIA GPU accelerators have emerged in High-Performance Computing as an energy-efficient way to provide significant compute capability. The Green500 supercomputer list makes this clear: the top 10 supercomputers on the list feature NVIDIA GPUs. Today at the 2014 GPU Technology Conference, NVIDIA announced a new interconnect called NVLink which enables the next step in harnessing the full potential of the accelerator, and the Pascal GPU architecture with stacked memory, slated for 2016. 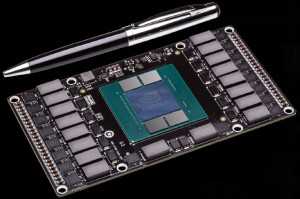 Pascal will support stacked memory, a technology which enables multiple layers of DRAM components to be integrated vertically on the package along with the GPU. Stacked memory provides several times greater bandwidth, more than twice the capacity, and quadrupled energy efficiency, compared to current off-package GDDR5. Stacked memory lets us combine large, high-bandwidth memory in the same package with the GPU, allowing us to place the place the voltage regulators close to the chip for efficient power delivery. Stacked Memory, combined with a new Pascal module that is one-third the size of current PCIe boards, will enable us to build denser solutions than ever before.

Today a typical system has one or more GPUs connected to a CPU using PCI Express. Even at the fastest PCIe 3.0 speeds (8 Giga-transfers per second per lane) and with the widest supported links (16 lanes) the bandwidth provided over this link pales in comparison to the bandwidth available between the CPU and its system memory. In a multi-GPU system, the problem is compounded if a PCIe switch is used. With a switch, the limited PCIe bandwidth to the CPU memory is shared between the GPUs. The resource contention gets even worse when peer-to-peer GPU traffic is factored in.

NVLink addresses this problem by providing a more energy-efficient, high-bandwidth path between the GPU and the CPU at data rates 5 to 12 times that of the current PCIe Gen3. NVLink will provide between 80 and 200 GB/s of bandwidth, allowing the GPU full-bandwidth access to the CPU’s memory system.

A Flexible and Energy-Efficient Interconnect

The basic building block for NVLink is a high-speed, 8-lane, differential, dual simplex bidirectional link. Our Pascal GPUs will support a number of these links, providing configuration flexibility. The links can be ganged together to form a single GPU↔CPU connection or used individually to create a network of GPU↔CPU and GPU↔GPU connections allowing for fast, efficient data sharing between the compute elements.

When connected to a CPU that does not support NVLink, the interconnect can be wholly devoted to peer GPU-to-GPU connections enabling previously unavailable opportunities for GPU clustering.

Moving data takes energy, which is why we are focusing on making NVLink a very energy efficient interconnect. NVLink is more than twice as efficient as a PCIe 3.0 connection, balancing connectivity and energy efficiency.

What NVLink and Stacked Memory Mean for Developers

Today, developers devote a lot of effort to optimizing and avoiding PCIe transfer bottlenecks. Current applications that have devoted time to maximizing concurrency of computation and communication will enjoy a boost from the enhanced connection.

NVLink and stacked memory enable acceleration of a whole new class of applications. The large increase in GPU memory size and bandwidth provided by stacked memory will enable GPU applications to access a much larger working set of data at higher bandwidth, improving efficiency and computational throughput, and reducing the frequency of off-GPU transfers. Crafting and optimizing applications that can exploit the massive GPU memory bandwidth as well as the CPU↔GPU and GPU↔GPU bandwidth provided by NVLink will allow you to take the next steps towards exascale computing.

Starting with CUDA 6, Unified Memory simplifies memory management by giving you a single pointer to your data, and automatically migrating pages on access to the processor that needs them. On Pascal GPUs, Unified Memory and NVLink will provide the ultimate combination of simplicity and performance. The full-bandwidth access to the CPU’s memory system enabled by NVLink means that NVIDIA’s GPU can access data in the CPU’s memory at the same rate as the CPU can. With the GPU’s superior streaming ability, the GPU will sometimes be able to stream data out of the CPU’s memory system even faster than the CPU.

About Denis Foley
Denis Foley is a Senior Director in NVIDIA’s GPU Architecture group. He leads a team of architects in NVIDIA’s Westford, MA office developing NVLINK protocols and other sundry cool stuff. Prior to NVIDIA, Denis has held senior technical roles at AMD, ATI and HP, where he did everything from the development of a modular SOC architecture, lead development of AMD’s initial APUs, architected ATI’s first handheld application processor and was implementation lead for HP’s flagship high-end server.
View all posts by Denis Foley