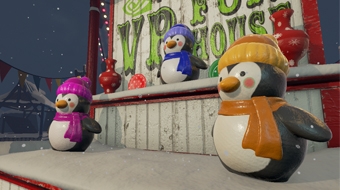 VR Funhouse is NVIDIA’s open source VR Game that is moddable by the community. We are running a contest to find the best mods out there. As well as getting to share their work with the community, modders can win great prizes including Cash and GeForce GTX graphics cards.

Vr Funhouse is built on Unreal Engine 4 from Epic Games. Anyone can create mods using our custom game editor and UE4’s visual scripting system, no coding is required.

Check out the links below for inspiration and get started modding in VR! The contest closes on the 20th of January.

Looking for a little inspiration?

This week we released a Winter Wonderland mod, featuring penguins, ice cannons and snowball fights, this mod shows what can be done in VR Funhouse.

In October, Epic held a Game Jam in Hamburg. The community pulled together and created some great mods. They include Power Tower, Beer, Beer, Beer and Sausages, Wizard’s Funhouse and Kid in a Candy Store.

We are kicking off a series of developer training videos for modders on Twitch. The first one is scheduled for Friday, December 16th at 1pm Pacific. Join us.

Update: Here's the video from that first training session.

You can find links to everything you need including training videos and forums on the VR Funhouse Mod Kit home page.

More details on the latest VR Funhouse can be found here.

To learn more about participating in our Mod Contest click here: Learn More